Alongside today’s release of the new Pixel 6 smartphones, Google has again upgraded one of the device’s most basic — but often overlooked — functions: the ability to make phone calls. In previous years, Google Assistant learned to screen your calls and make your reservations by phone via a technology called Duplex. Last year, it learned how to wait on hold for you, too. Today, Google is expanding some of these existing features and adding new ones — including a tool that shows you the best time to call a business and a new Duplex-powered feature for navigating businesses’ phone trees.

With the Phone app on Pixel 6 and Pixel 6 Pro, a new feature called “Wait Times” will display the projected time it will take to get through to a person when dialing a toll-free number. You’ll be able to see this information before you place the call not only for the present time, but also for the rest of the week. This information may allow you to make a better decision about when to place the call.

Of course, in order to show this information, Google is leveraging its ability to collect data from its users. Similar to how Google Maps will show you when a business is the most crowded using anonymized data from Maps users, “Wait Times” are inferred from call length data when calls are placed through its phone app. This data is not linked to individual users, Google says.

Another new addition is the “Direct My Call” feature, which will help you get through complicated phone trees when you dial a business. Instead of listening and trying to remember the many options presented (e.g., “Press 1 for hours and locations”), Google Assistant will translate the automated messages for you. This allows you to read back through the options to see which number you’ll want to tap to get the information you need — or to reach a live agent, as is often the case.

In the past, users frustrated with difficult customer service calls may have turned to third-party apps and websites like GetHuman, to figure out how to reach a real person more quickly. But these websites aren’t always up to date. “Direct My Call” offers an alternative. You could multitask or even set your phone down while the various options are read aloud — something that’s tedious to have to listen to in real time. When you return to the phone, you’ll be able to read the options available and choose the one you need. (The feature could also help those who are hard of hearing, but who don’t yet require a TTY.)

Like the the earlier reservation-setting feature, “Direct My Call” is also powered by Google Duplex technology.

Duplex is sometimes confused with the reservation scheduling feature itself, which was one of the first big use cases for the technology when it debuted. But Duplex itself doesn’t just enable natural-sounding conversations for making your appointments. It can be used for understanding, too. In the case of “Direct My Call,” for example, Duplex uses advanced speech recognition and language understanding models to help determine when the business wants you to do something — like press a number, say a word (like “representative”) or enter your account number, among other things.

In addition to “Direct My Call” and “Wait Times,” which are launching with the Pixel devices, for the time being, Google is also expanding access to “Hold for Me.”

Since launching last year in the U.S., the feature has saved users over 1.5 million minutes per month. In the coming months, it will begin to roll out to Pixel users in Australia, Canada and Japan, as well, says Google. 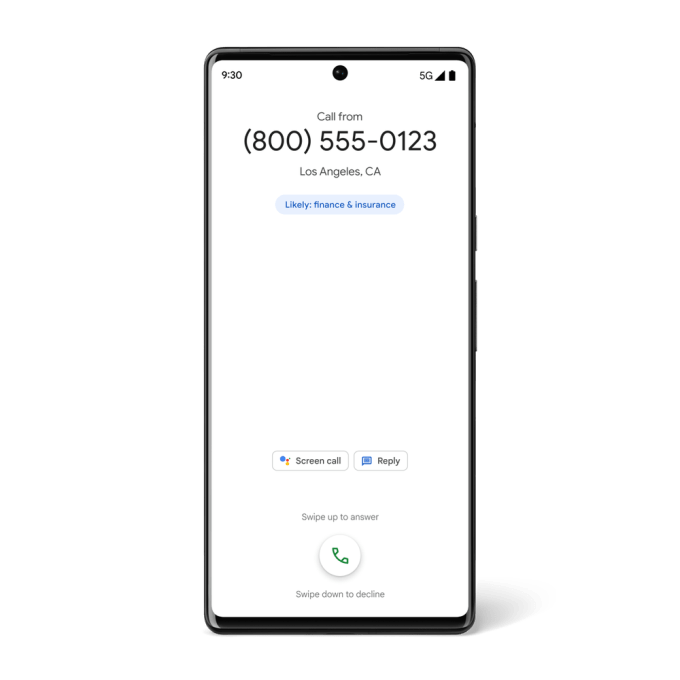 Before, Google’s own caller ID coverage would help users to identify spam and other calls from unknown numbers. Now, it will allow users to contribute data about their incoming business calls, too. That means you’ll be able to share what type of business had called you (e.g., bill collectors, finance, utilities, etc.) so that others who receive the same call in the future will know what to expect. This data is shared without any personal identifiers, notes Google. The company believes this will help double the number of businesses with caller ID information going forward.

In addition, call screening will expand to more markets. In the U.S., Canada and Japan, it’s now screening 37 million calls per month. Starting today, it will roll out to Pixel users in the U.K., France, Germany, Australia, Ireland, Italy and Spain, too.

Typically, Google releases new features to its latest Pixel phones first, before rolling them out over time to more Pixel devices or Android more broadly. That means “Wait Times” and “Direct My Call” will likely be exclusive to Pixel 6 phones for some time, initially.