Since its earliest days, the Portal line has been plagued by one major question: why? Not so much why did Facebook make it (for that I give you the following: $$$), but rather, why should people be interested, given Amazon and Google’s respective head starts in both the smart assistant and display categories?

In addition to its integration with Facebook services, Portal’s original standout feature was smart panning, which used object detection to reframe its subjects. It was a clever addition — if not necessarily enough to justify purchasing a Facebook-produced product over the competition. Since then, however, Google, Amazon and even Apple have introduced their own versions of the technology, removing Facebook’s edge. 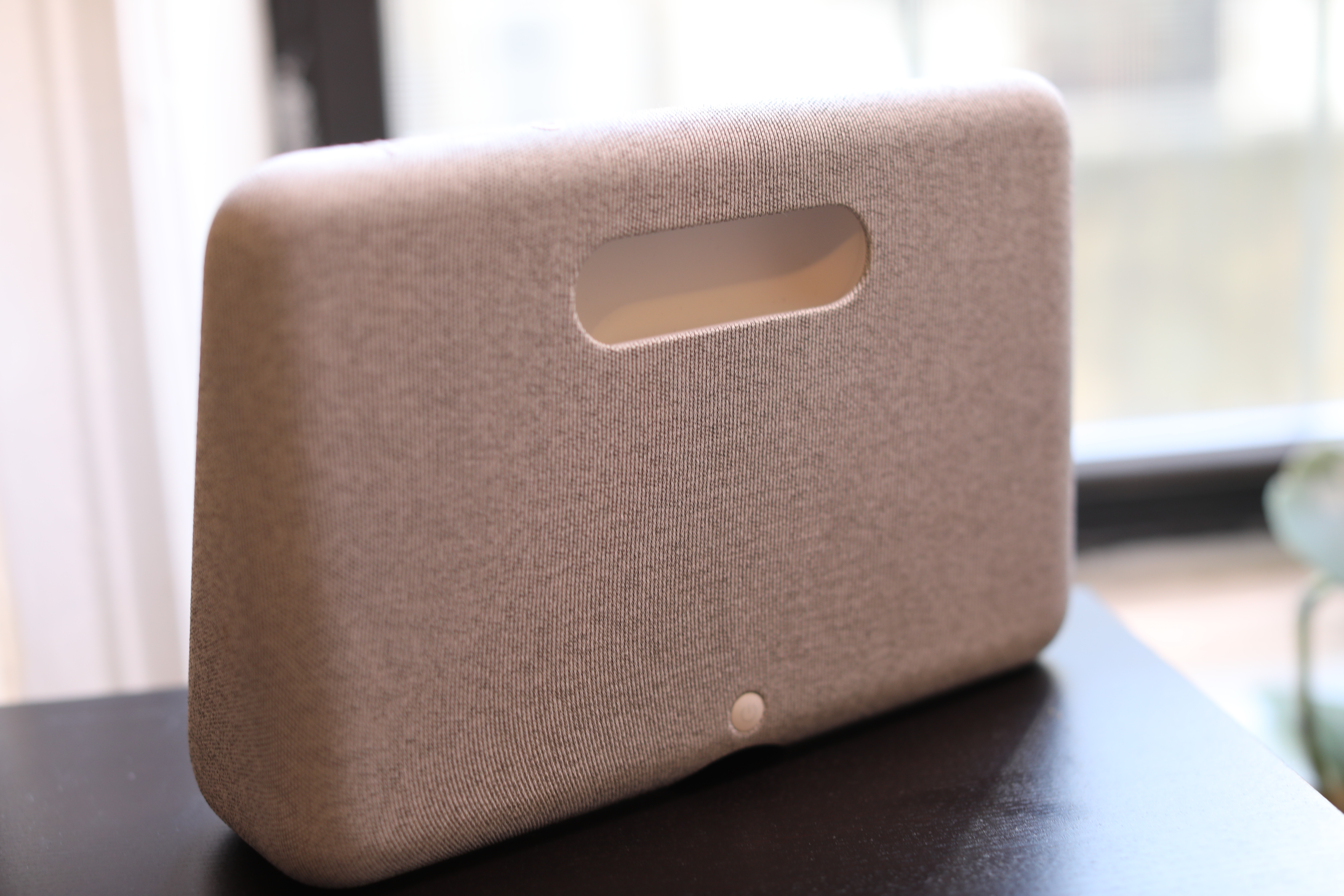 While the Portal Go doesn’t address the larger question of why, it does once again showcase Facebook’s ability to think outside the smart screen box by adding portability to the mix. Honestly, it’s one of those things I’m surprised the competition hasn’t gotten on board with. Amazon discontinued its portable Bluetooth speaker, the Tap, some time ago.

Beyond that, you’d have look to an Alexa-enabled Fire tablet or third-party devices for a similarly portable solution. Otherwise, the Amazon and Google solution has effectively been convincing users to simply stick a device in every room in which they plan to use it. Personally, I’ve always wondering why they’ve not embraced the flexibility of a battery-powered model.

The Go was built with portability in mind, right down to the inclusion of a built-in handle on the rear of the device. It’s a reasonably light three pounds (compared to, say, the 4.7-pound MacBook Pro that Apple just launched). Does anyone need a smart screen they can take with them? Certainly no more than anyone needs a smart screen period, but there’s a lot to be said for flexibility. For a device primarily designed for video, it’s genuinely nice to be able to pick it up and take it with you. 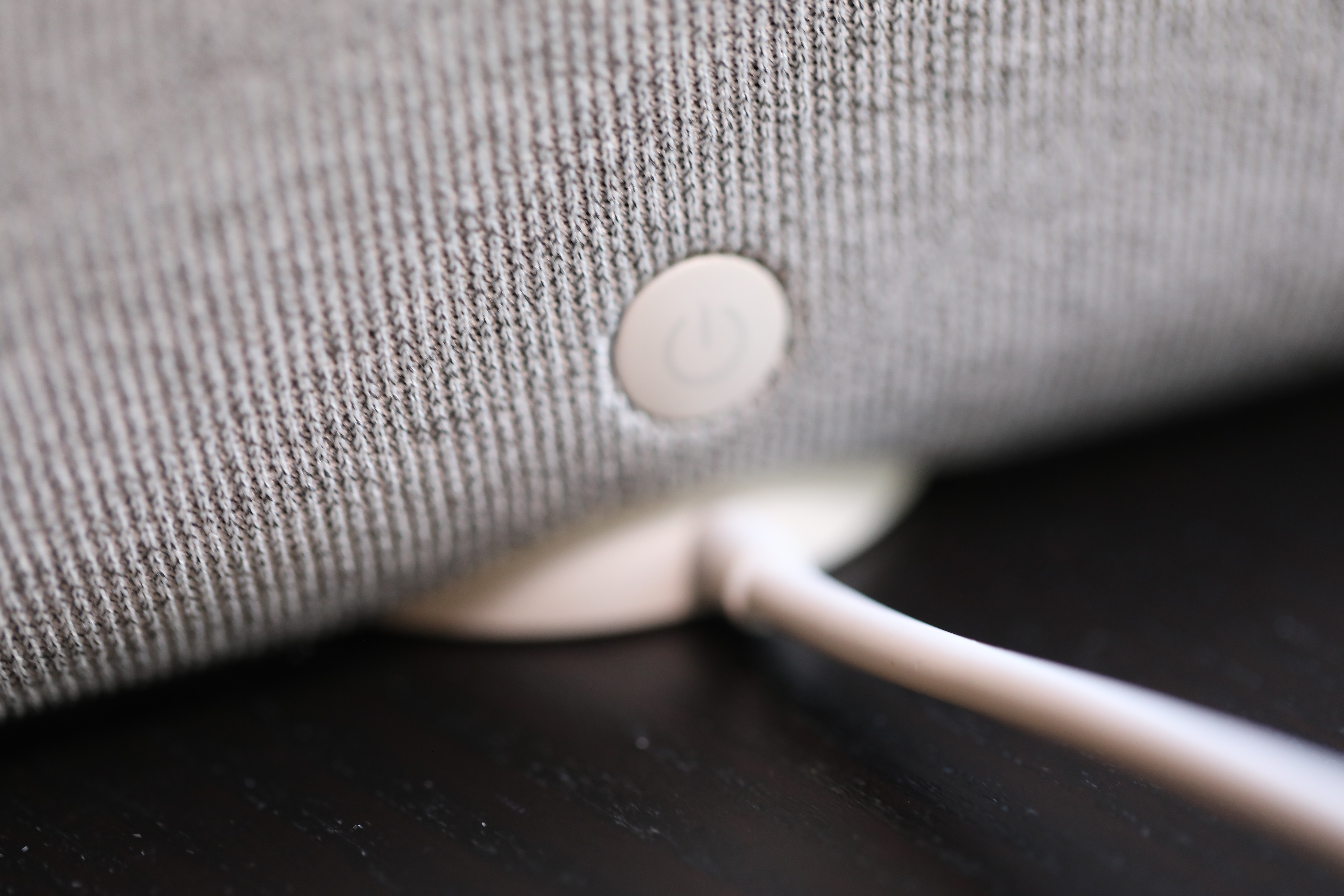 The key to this is a built-in battery and wireless charging. The latter relies on a proprietary three-pin charging pad with a USB-C plug on the other side. The charger may be my biggest complaint about product design here. I understand why Facebook decided not to go hardwired here, so you can simply pick it up and go without unplugging. But a wired charging option would have been nice, letting you top that battery up faster. At the very least, it would be great to have a charging pad that snaps into place magnetically, because it’s a pain getting the pins aligned to charge the thing. 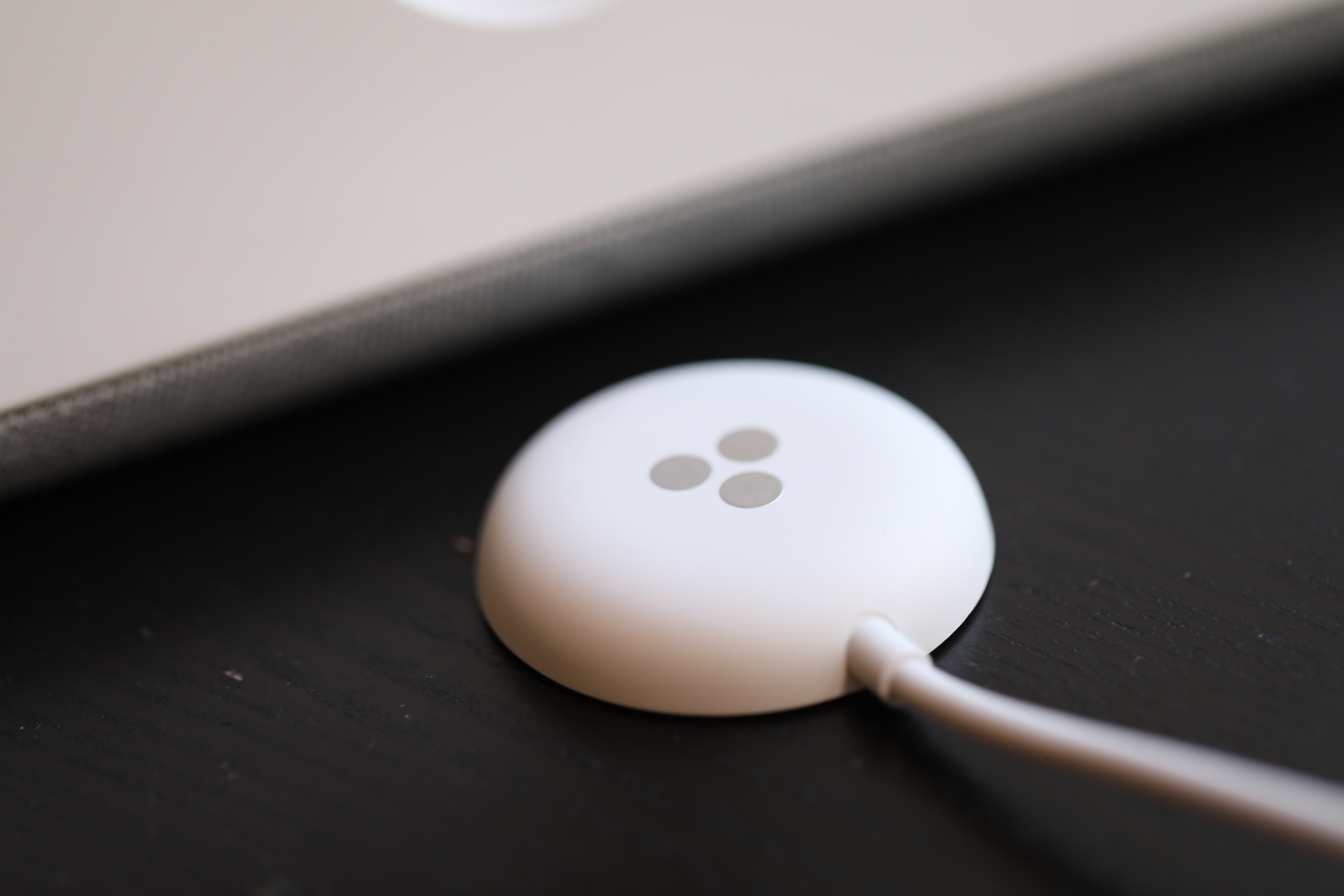 The display is a 10-inch touchscreen, with 1280 x 800 resolution. Nothing to write home about there, but certainly adequate for a vast majority of what you need to do on this thing, from teleconferencing to watching bite-sized videos through Facebook. That’s coupled with a 12-megapixel front-facing camera and a four-mic array. Again, this isn’t going to compete with the teleconference setup you invested in when the world went to hell and all meetings went virtual, but it’s perfectly fine for calling family or even taking the occasional work meeting. The fabric-covered back of the device houses two rear-facing speakers and a woofer. The sound isn’t great. It’s a bit muffled. Not something I would use in everyday music listening, but it works in a pinch.

The device is chunkier than most smart displays. It’s got rounded corners and a sizable bezel, wrapped in a fabric covering that’s standard fare for home products these days. In fact, the design is something of a cross between an Echo or Nest-style home product and something targeted toward kids. The latter lends it a kind of robustness you’d want out of a portable product like this. 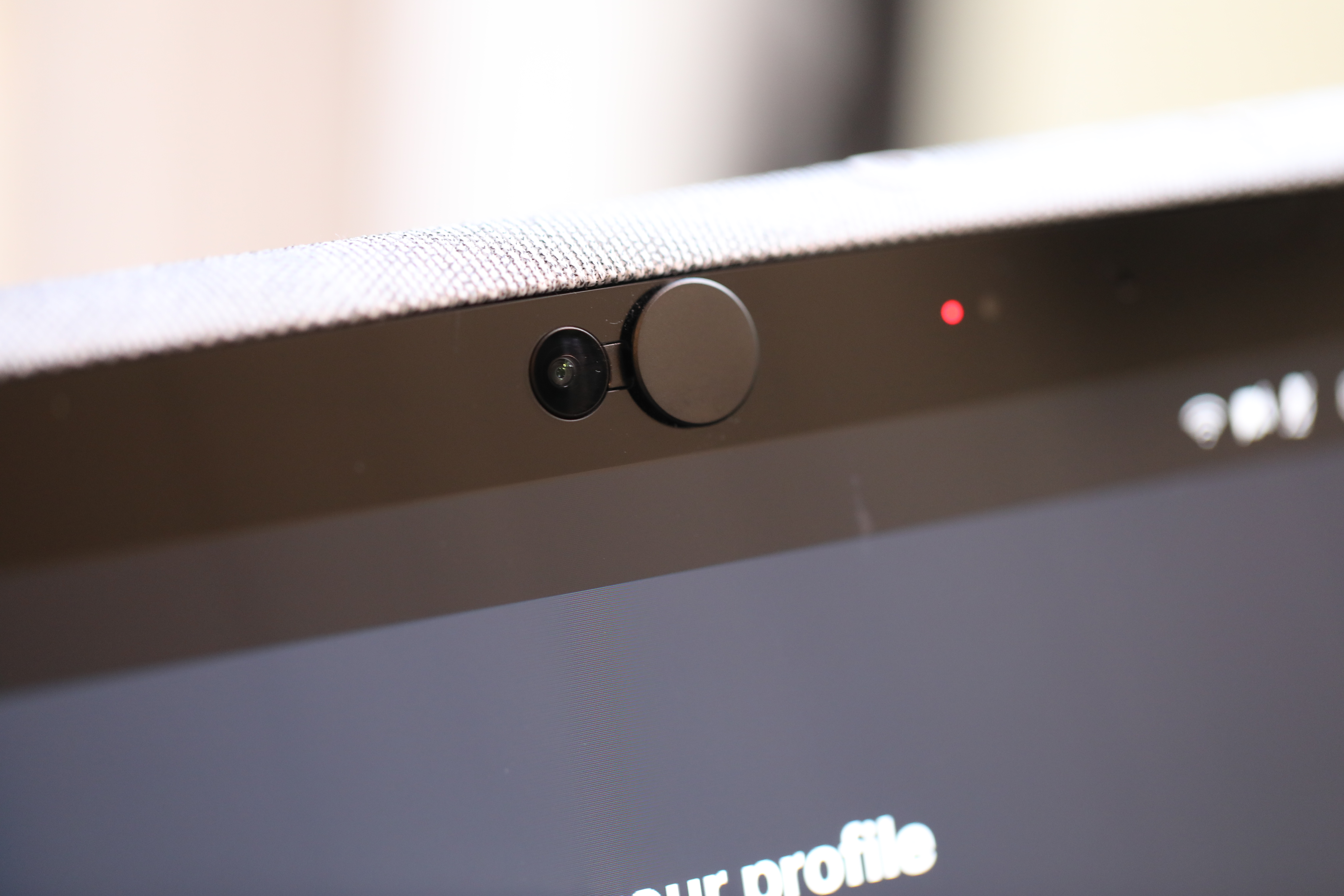 It’s not rugged exactly, but it can probably handle the occasional accidental knocks and bumps better than, say, the Nest Home. That, combined with some of the storybook content, may make the Go better suited than most for a setting with younger kids around. There’s a physical shutter that slides over the front-facing camera. If you’re like me, you’re probably going to keep that on 90% of the time — essentially any time I’m not making a call. That doesn’t disable the microphone, but a circular button sitting next to the volume keys will. Clicking that will take the camera and microphone offline, denoted with a red light.

For Facebook calling in particular, the thing is a cinch. Say, “hey Portal, call such and such,” and it will show you a name and ask if it found the right person. This is really the heart of the product, offering a device specifically tailored to the sorts of conversations you would have through Facebook Messenger. You can add filters and watch videos or read story books together. The device’s strength has always been in these shared experiences, built specifically around Facebook’s software. 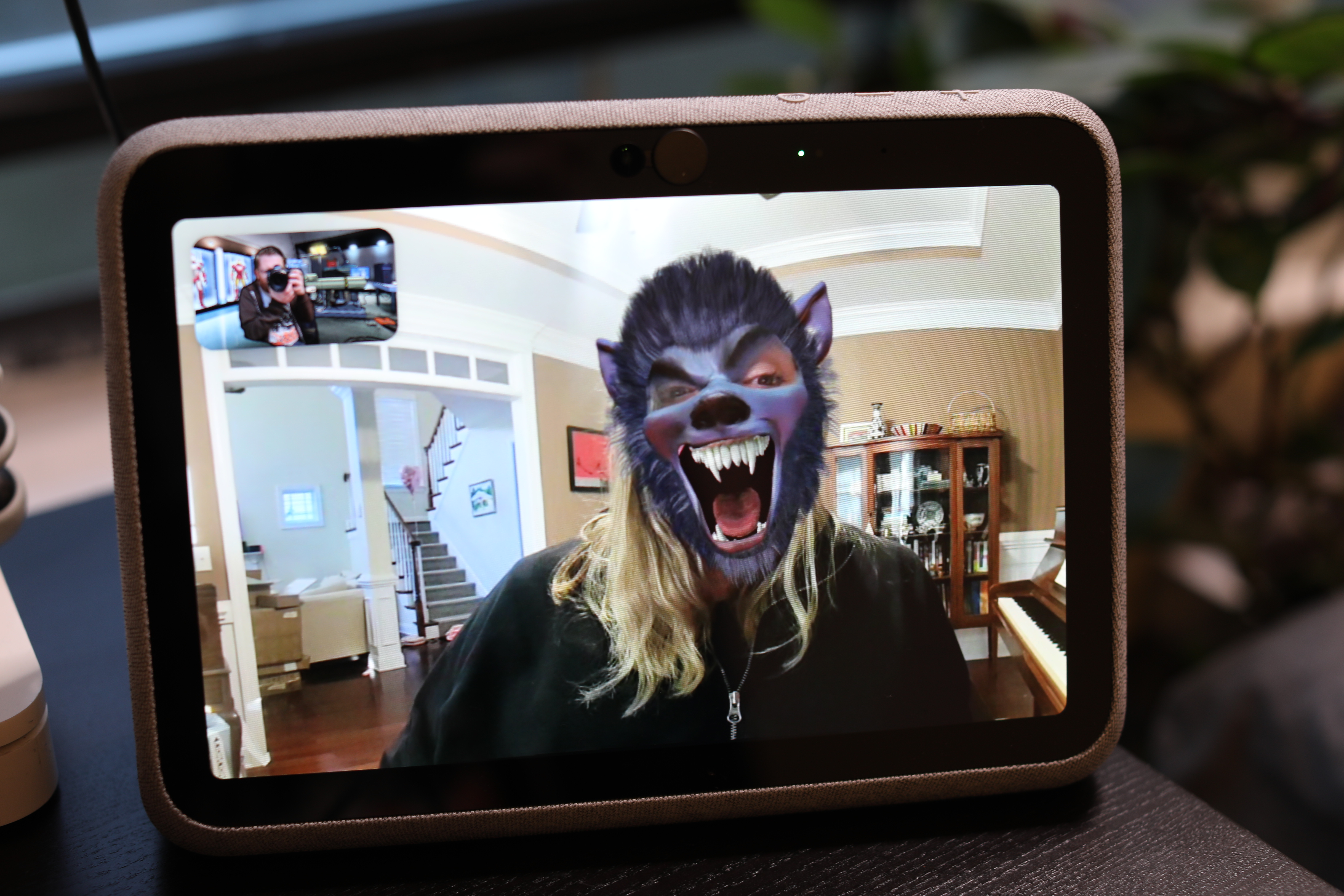 There are shared storybooks, good for grandparents connecting remotely with grandkids. The selection of filters in the Facebook Messenger app is just okay. They’ll add funny hats and occasionally distort your voice, but aren’t really aimed at, say, smoothing perceived flaws, for better or worse. I found that they struggled a bit on slower Wi-Fi, ditto for the Facebook Watch videos — in some cases there was a lag, which can ruin the effect a bit.

The app selection beyond Facebook is limited. Spotify, Tidal, Deezer and Pandora are nice. The Go works as a portable Bluetooth speaker with a built-in display. I found myself turning off the camera, bringing it into the bedroom and listening to music by interacting with Spotify on the touchscreen. You’ve got a decent selection on the teleconferencing front, including Zoom, WebEx and Blue Jeans. It’s not a catchall, but that should cover a decent number of work meetings. 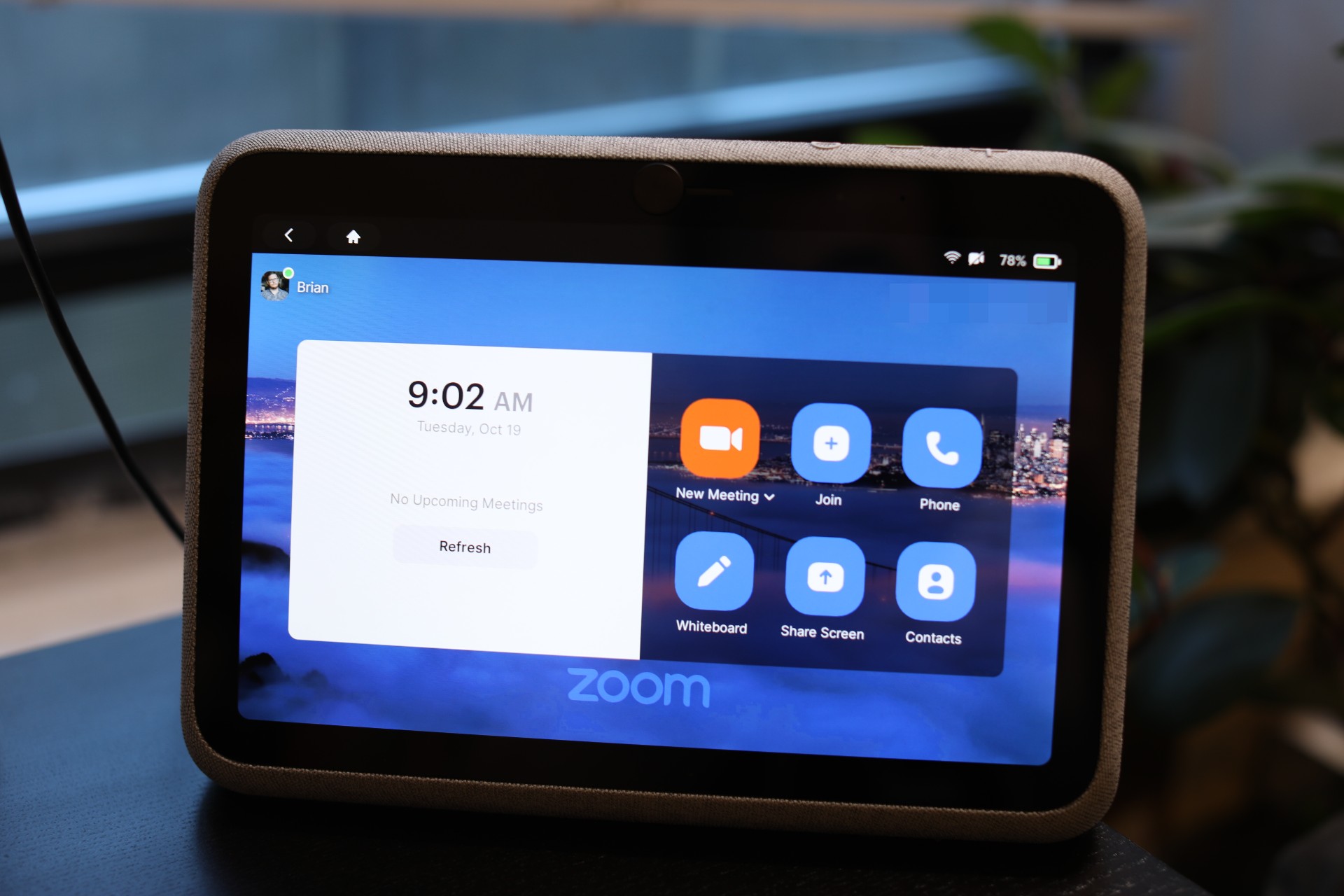 It handles these well — in fact, that, combined with portability, is probably the most compelling use case of the bunch. The leading smart displays all have some compatibility with third-party teleconferencing apps, but it’s nice being able to move it around and not have to worry about finding an outlet if you don’t want to be stuck to your desk all day.

Beyond this, the app selection is bare-boned. There are a couple of news and cooking apps, while popular third-party services like YouTube are available as browser shortcuts. If you want to, say, watch Netflix, you can visit the site in the browser and watch it that way. Ultimately, much of it comes down to that. If you’re all in on Facebook apps (and all of the complications that brings), then one of these is probably the device for you.

On the portability side, there’s isn’t really any direct competition to the Go at the moment. The product doesn’t answer the broader questions of “why” for the Portal line, but at least it addresses the “where.”