In 2019, Amazon introduced a more affordable way to stream Amazon Music with the launch of a free, ad-supported music service that streamed only over its Echo speakers. Today, Apple is catching up with its reveal of a new, lower-cost version of its Apple Music subscription it calls the “Voice plan.” Unlike Amazon’s service, the Voice plan is not free. Instead, it’s a more affordable, $4.99 per month ad-free subscription that limits consumers to only being able to access Apple Music via Siri voice commands.

Explained by the company at its October event today, the new Voice plan will allow customers, in 17 countries to start, to use Siri to play songs, playlists and all stations in Apple Music when the service launches later this fall. This will also include access to a series of new playlists based on moods and activities, as well as personalized mixes and genre stations. That means you’ll now be able to ask Siri to play you music for a dinner party or something that would help you to wind down at the end of the day, for example. Hundreds of new playlists will be available, said Apple. 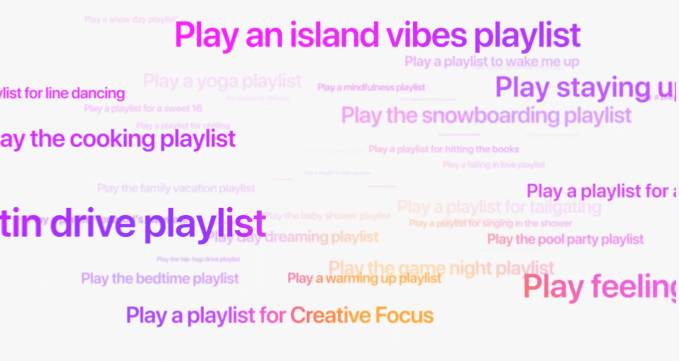 Apple Music rivals, including Spotify, Amazon Music and Pandora already offer such a feature — and have for years. So this is a matter of Apple playing catch-up in the space with its own expanded set of editorially crafted mood and activity playlists. Currently, its editorial selections are more limited to its “Made for You” lineup, which includes personalized playlists like your Favorites Mix, Chill Mix, New Music Mix and Get Up Mix.

While Apple says the new Voice plan can be used to access Apple Music across “all your Apple devices,” it’s clearly been designed with HomePod in mind — similar to Amazon’s free music streaming for Echo. If using a phone, tablet or computer, it wouldn’t necessarily make sense to speak to Siri to play music when you have a device with a screen. However, the service could possibly be interesting to those who primarily listen to Apple Music via their AirPods — and don’t mind speaking all their commands.

Apple says the service will also work via CarPlay, in addition to iPhone and other devices like iPad, Mac, Apple TV and Apple Watch.

Subscribers will see a customized app interface that displays suggestions based on their music preferences and a queue of their recently played music through Siri. There will also be a section called “Just Ask Siri,” which teaches users how to optimize Siri for Apple Music. 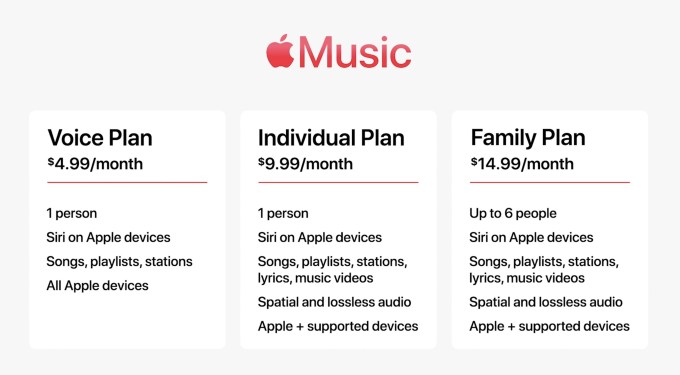 Apple said it will market the service to non-subscribers who ask for music through Siri. They’ll be able trial the service for seven days for free, with no auto-renewal.