On Saturday, some Instacart shoppers will go on strike, protesting the company’s low pay and lack of communication with its laborers. The action is led by the Gig Workers Collective, formed in early 2020, though Instacart shoppers have organized several walk-offs since 2016. At the onset of COVID-19 lockdowns in the U.S., for instance, the collective rallied for better safety precautions amid the outbreak.

The Gig Workers Collective — representing a body of about 13,000 of Instacart’s 500,000 shoppers — launched a campaign last month urging customers to delete the Instacart app as a show of solidarity with shoppers’ demands. But Instacart didn’t address the collective’s demands, which include being paid by individual order, not by a batch of orders; to re-introduce item-based commissions; to ensure the rating system doesn’t punish shoppers for issues beyond their control; to provide occupational death benefits; and to make the default tip at least 10%, up from the current 5% default. Now, the shopper activists will go on strike until these demands are met.

Some shoppers are frustrated that despite Instacart’s $39 billion valuation, they feel it’s becoming harder to make a reasonable hourly rate on the platform. In the past, Instacart had a $10 minimum on earnings for each batch a shopper completed (batches can contain between one and three individual customers’ orders). But after founder and former CEO Apoorva Mehta publicly apologized in February 2019 for subsidizing this $10 minimum with shoppers’ tips, the minimum batch pay changed to $7 for full-service shoppers, who both pick the groceries and deliver them. Instacart framed this as “a higher guaranteed floor” — the previous minimum batch payment was $3, though shoppers always got at least $10 because of the established minimum (which was paid for in part with shoppers’ own tips, unbeknownst to them at the time). But with that policy removed, some shoppers are making even less money than they were before the policy change.

Now, a shopper might fill three customers’ individual orders for a minimum total of $7 base pay, before tips. Instacart told TechCrunch that it considers items, mileage, weight and other factors when determining payment for a batch. But Willy Solis, a lead organizer for the Gig Workers Collective and Instacart shopper, told TechCrunch that there’s “no rhyme or reason” to the way orders are combined into batches.

“You would think that they would be in the same geographic location that you’re delivering to, but they’re not,” he said. “It can be totally different parts of the city, so you have to drive east for one and west for the other.”

Instacart told TechCrunch that batching orders makes it possible for shoppers to earn three individual tips off of one trip to the grocery store. But this means that shoppers can only earn decent compensation if their customers tip appropriately. When customers go to check out, the default tip option is 5%. One of the collective’s goals of the strike is to raise the default to 10%, which was standard on the platform in 2016. If a customer tips higher than 5%, that percentage will auto-populate as the default for their next order, but shoppers are still finding that they aren’t making adequate hourly wages.

The Gig Workers Collective told TechCrunch that workers have seen a significant slash to their earnings over the last three months. A shopper in Canada, Daniel Feuer, recently wrote an open letter to Instacart CEO Fidji Simo, who took the helm of the company in July. He created a graph that shows his hourly wage over the last year.

“It’s not gone unnoticed that, in the company’s pre-IPO drive to profitability, batch earnings pay has been drastically cut,” he wrote. “See how it starts dropping in May this year?” 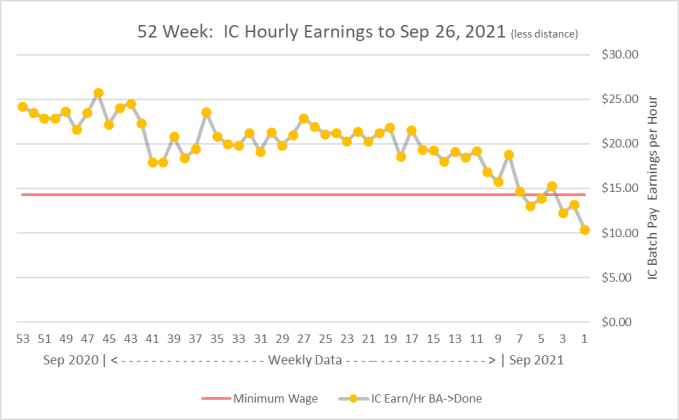 Other shoppers have also observed that their pay has gone down over time. Shoppers pay for their own gas, car insurance and car expenses, so their take-home pay stretches less than it might seem.

Anni McClung, a shopper based in Houston, Texas, started shopping on Instacart four months ago. But she’s already confused by how pay is calculated.

McClung, who will participate in the strike, said that she tried to contact Instacart’s customer service line for shoppers to learn how mileage is calculated into base pay for a batch. She said that she was routed to three different representatives without receiving an answer.

TechCrunch asked Instacart to clarify how base pay is impacted by the distance a shopper has to drive. The company said that mileage is incorporated into a shopper’s base pay at a rate of $0.60 per mile from store to customer delivery, except in California, where the rate is $0.30 per mile. But shoppers aren’t seeing that value reflected in their batches. Instacart declined to tell TechCrunch whether or not the $7 minimum is inclusive of the $0.60 per mile driven. If that is the case, then that would explain why shoppers might see a batch that’s five miles away for less than $8 — if the mileage were added to the minimum labor fee, then a five-mile drive would give the shopper an extra $3 to their $7 base. 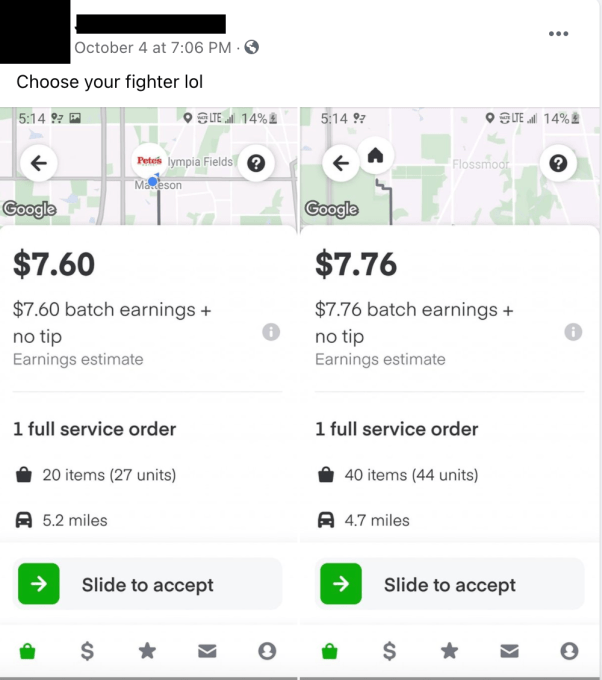 Instacart contracted 300,000 more shoppers during the coronavirus pandemic since the demand for grocery delivery was higher than ever. Instacart told TechCrunch that its shopper population has remained steady at around 500,000 shoppers since then, and that customer demand is four times higher than it was at the start of 2020. Since March 2020, Instacart said shoppers have earned more than $5.5 billion on the platform.

But as customers adapt to the conditions of the pandemic, shoppers observe that fewer customers are using the service, making it harder to get work on the app. Instacart said that there are waitlists to become a shopper in many regions. Shoppers that spoke to TechCrunch from Nevada, Texas and New York all reported that their markets are oversaturated with shoppers’ demand for batches to fill.

“In the beginning of the pandemic, it was great. I was making anywhere from $1,200 to $1,500 a week only working about 30 hours or so,” said JoJo Spatafora, a shopper in Staten Island, New York who has been with Instacart for three years. “But it seems as if things have changed and they over-hired. Instacart has been aware of this and has not done anything about it. They only care about customers, not their shoppers.”

In the past, shoppers would set the hours they wanted to work, and during that time, they would be individually assigned batches — they had four minutes to look it over and decide if they wanted to accept before it would be assigned to someone else. Since 2019, Instacart has used an on-demand system, where shoppers can choose to work at a moment’s notice. Because of that, many shoppers will be offered a batch at once, which shows the base pay, tip, distance to drive, and a preview of the items in the order — whoever swipes on the batch first gets the job. Goen told TechCrunch that her area is so oversaturated with shoppers that when a batch pops up, she needs to accept it without taking much time to look over the details.

“I’m 58 years old, and if I see something that’s got a decent pay, I don’t have the time to see how many cases of water are going to a third-floor apartment,” Goen said. “I just can’t physically do those kinds of orders anymore, and if I were to accept that and then cancel it, that would go against my acceptance rate.” If a shopper has canceled around 15% of their last 100 orders, they will start to receive notices from Instacart before their account is suspended.

Shoppers going on strike hope that this action will get the attention of CEO Fidji Simo. Instacart told TechCrunch that Simo has been regularly conversing with shoppers about their experiences on the job, but Simo hasn’t responded to the Gig Workers Collective’s open letters.

“As far as the strike, I don’t participate in such nonsense because it does not make a difference,” Spatafora told TechCrunch. “Once when shoppers went on strike, Instacart decided to punish us by removing the three-dollar bonus every time a customer gives us a five-star rating.”

Spatafora is referring to a past Instacart policy that would give shoppers an extra $3 for each order they completed with a five-star rating. Workers were tipped off that the bonus would last through January 2020. But when shoppers went on strike in November 2019 to demand that the default tip be raised from 5% back to 10%, the company removed the bonus soon after. Instacart said that it always planned to end the bonus in November 2019, but the Gig Workers Collective claimed that this was an act of retaliation.

“Are we really going to impact business? Probably not,” said Goen. Instacart affirmed to TechCrunch that they don’t expect to see a change in their revenue. “But this will be my sixth walk-off I think. I’m going to keep doing it ’til we make progress. And we have made progress every now and then.”