During the pandemic and shift to remote work that came with it, many people took advantage of their newfound flexibility to try living in different places.

One startup poised to benefit from this is Zeus Living, which is focused on giving people “flexible living” options and has just raised $55 million in a round led by SIG.

Initialized Capital, CEAS Investments, TI Platform, NFX, Opendoor’s Eric Wu and Miras also participated in the financing, which brings the startup’s total raised to $125 million. The company declined to reveal its current valuation, but it was valued at $205 million at the time of its last raise in 2019.

Zeus Living started its life by redecorating landlords’ homes and renting the furnished properties primarily to relocated workers for 30-day stays (or longer) for a new type of corporate housing. Since then, it has broadened its focus and evolved into a company that gives people — not just corporate employees — more options to generally move around with less commitment.

“Since our start, we provided ‘home’ to people traveling for work, but also for grandparents spending extended time with newborn grandbabies, people seeking healthcare and families renovating their homes,” said CEO and co-founder Kulveer Taggar. “Over the past 18 months we’ve superseded corporate housing and are challenging the old, rigid rental market by offering beautifully designed homes outfitted at fair prices and flexible terms in places residents want to live.”

It’s a cool comeback story, considering that at the onset of the pandemic, Zeus Living made headlines for laying off about 80 people, or about 30% of the company. And the demand is there.

As evidence of the pandemic and the resulting remote work shift, Zeus Living says it saw a “6x increase” in residents booking leases with no predetermined end date, for an average stay of 129 nights, over the last year.

Fundamentally, Taggar believes “there is a new American dream” that doesn’t involve buying a house as being a symbol of someone “making it.”

“What we see now for this new generation, that goal or dream, doesn’t relate as much to buying a house,” he told TechCrunch. “They want to invest in experiences over possessions. They want to be more mobile. And they just want to do that without tons of headache and hassle.”

In 2019, Zeus Living offered 2,400 homes on its site, partnering with homeowners to manage their properties and rent them out. Today, that has grown to nearly 5,000 homes in 96 U.S. cities such as Austin, Miami, Portland and Philadelphia. Occupancy is 87%, compared to 82% in 2020, while “revpar” (the revenue it achieves for the homeowners whose properties it manages) has increased 21% this year compared to last.

Over time, residents have spent over 1.4 million nights with Zeus, and 811,562 of those were during the pandemic. The company is approaching $250 million in lifetime booking revenue.

Since those March 2020 layoffs, the company has been able to hire back some of the people it was forced to lay off, according to Taggar. But it’s still operating somewhat lean comparatively speaking, with 122 employees.

The company emphasizes that unlike its investor Airbnb, it is not a marketplace and manages its homes — from curation to design to property management and service. Plus, its homes are priced for 30+ day stays and not nightly. Airbnb is a channel for Zeus, though.

With Zeus, Taggar said, users can browse the thousands of homes that it manages and pick the dates they want to stay there — whether it be five weeks or five months, all from their phone. Residents also don’t have to set up utilities or Wi-Fi. Zeus will take care of that, too.

“You can be flexible and leave with just two weeks’ notice,” he said. “And you can then trust that the experience is going to be good because Zeus has put in the hard work of curating the home in the first place. We’ve inspected it, and we know it’s safe, and then we will design it to make it comfortable for you to live in.” 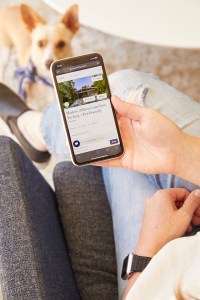 While Zeus was growing revenue 3-4x a year since it started in 2015, it hit a temporary speed bump when the pandemic started, according to Taggar.

“But we’re getting back on that path,” he said.“ We’re making the rental experience very modern and turnkey. Even if the operations behind the scenes to make that all work are quite involved and complicated.”

Looking ahead, the company plans to use its new capital to focus on growth and expansion.

“We’re supply constrained in all of our markets, so we want to go and get more homes,” Taggar told TechCrunch. “We also want to keep investing in, and improving, the online experience for our homeowners and residents.”

In fact, he said, Zeus Living has had $40 million in unmet demand over the past 12 months.

“We know where people want to live and how much they’re willing to pay for flexible living,” he said.

Garry Tan, founder and managing partner of Initialized Capital, is a repeat investor in Zeus Living, having led its seed and Series A rounds and invested in its Series B and C financings.

Overall, Tan believes the world of property management is “stuck in the same place taxi companies were before ride-hailing.”

Zeus Living, he believes, has created something that is a bit of “set and forget” for property owners. At the same time, it’s helping meet a need for people seeing flexible living options in “the absolute best markets.”

“We’re going into this new phase where people don’t have to be in a handful of cities,” he told TechCrunch. “You can be anywhere in the country. And this new idea of FlexLiving is that it makes that possibility more accessible to everyone.”

What makes Zeus even more special, in Tan’s view, is its ability to find properties in desirable areas of town that usually only the people who live in a city know about, so the residents can “live like a local.”

“It’s actually much harder to get those locations, so it’s also much more profitable, because it’s also where customers want to be,” Tan said.

Of course, Zeus Living is not the only player in the flexible rental space. The Guild, an Austin, Texas-based startup that turns apartments into comfortable short-term accommodations for business and other travelers, last raised a $25 million Series B in January of 2020. Last June, hospitality startup Sonder raised $170 million at a $1.3 billion valuation although it’s important to note that the company — which rents serviced apartments akin to boutique hotels — might be more of a competitor to Airbnb.