Reddit today is introducing a new way to post to its communities with the launch of the on-platform feature called “Predictions.” Spun off of the popular Reddit Polls, Predictions allow users to guess the answers to timely questions like “who will win the game tomorrow?” or “which character will meet their fate in the next episode?” or “how much will the price of Bitcoin move by Monday?,” among others.

This is the first new posting format Reddit has introduced in nearly two years, and one that the company says is designed to increase engagement on the platform by reducing the barrier to posting. That is, while some users may not feel comfortable posting publicly or engaging in discussions, they may take the time to respond to a poll or, now, make a prediction.

To use the feature in a Reddit community, or subreddit, a moderator will first create a Predictions Tournament. This is a series of questions where Reddit users will predict the answers. The tournament can include as many questions as the moderator wants to have, and they can continue to add new questions even after the tournament starts.

Each Reddit user receives 1,000 tokens when they join the Predictions Tournament. These are free — Reddit says there’s no monetization model in place for tokens, nor a plan to roll that out in the future. However, users will not be able to get more tokens during the tournament once those 1,000 are used. That means they have to place their bets wisely across all the predictions, or they could risk losing their ability to respond to later questions if they run out.

Users can place anywhere between 10 and 100 tokens on each question, but no more or less. 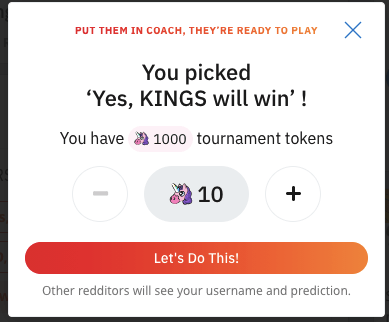 Moderators will choose the correct answers to the predictions, so they control the outcome of the Tournament and decide the winners. Of course, they are motivated to get this right as a community’s leader — and because there’s no financial gain for them either way. In addition, the tokens themselves have no value outside Prediction Tournaments, Reddit says.

Users who were right in their predictions will earn more tokens based on how many they originally put in. That means the better someone’s prediction skills, the more they’ll be able to bet in the future. They will also climb higher on the community’s Prediction Tournament leaderboard. 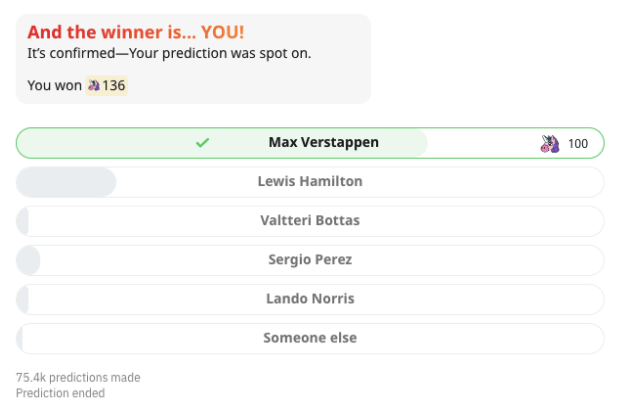 The company isn’t the first to see the value in predictions as a tool for user engagement.

Facebook’s internal R&D lab, the NPE Team, last year introduced an app called Forecast which offered a similar set of capabilities. In Forecast, users could make predictions about world events, like COVID-19, and engage in discussions. Since then, the company went on to announce its entry into the fantasy gaming market, but with a twist. Instead of building up all-star fantasy teams, users make simpler predictions about the games themselves. There are also non-sports games, like those that allow you to guess what will happen on TV shows like “Survivor” or “The Bachelorette.”

Elsewhere on the App Store, there are a number of apps for making predictions with friends, also often focused on sports. And across social media, there are Stories filters for personal predictions and other predictions games. For example, the Wishbone app maker Mammoth Media last year launched a Snap Mini game called Prediction Master for Snapchat users.

Reddit says the new feature will roll out to all communities with at least 10,000 members which are rated as safe-for-work.