The entire smartwatch category had a good Q2, as numbers jumped 27% year over year. That, in turn, was up 20% from a year prior, in spite — or perhaps because of — COVID-19 concerns. The popularity of these devices are the proverbial rising tide, with most of the big players benefiting from an overall increase in adoption.

But one name continues to loom large in a way seldom seen in a fairly mature category. Last quarter, the Apple Watch’s active user base crossed 100 million, according to Counterpoint Research. The company took three of the top four smartwatch spots globally with the Series 6, SE and Series 3, with Samsung managing to sneak into the No. 3 slot with its latest Galaxy Watch Active.

The company has seen competition on the low end of the market, with an influx of sub-$100 devices, but at the premium and mid-range end, Apple continues to be utterly dominate to such a degree that top competitors like Samsung and Google are teaming up to take it on. So, what do you do when you’re Apple? You tweak. You make the screen a bit bigger, you make the charger a bit faster and, most of all, you don’t really mess with a good thing. 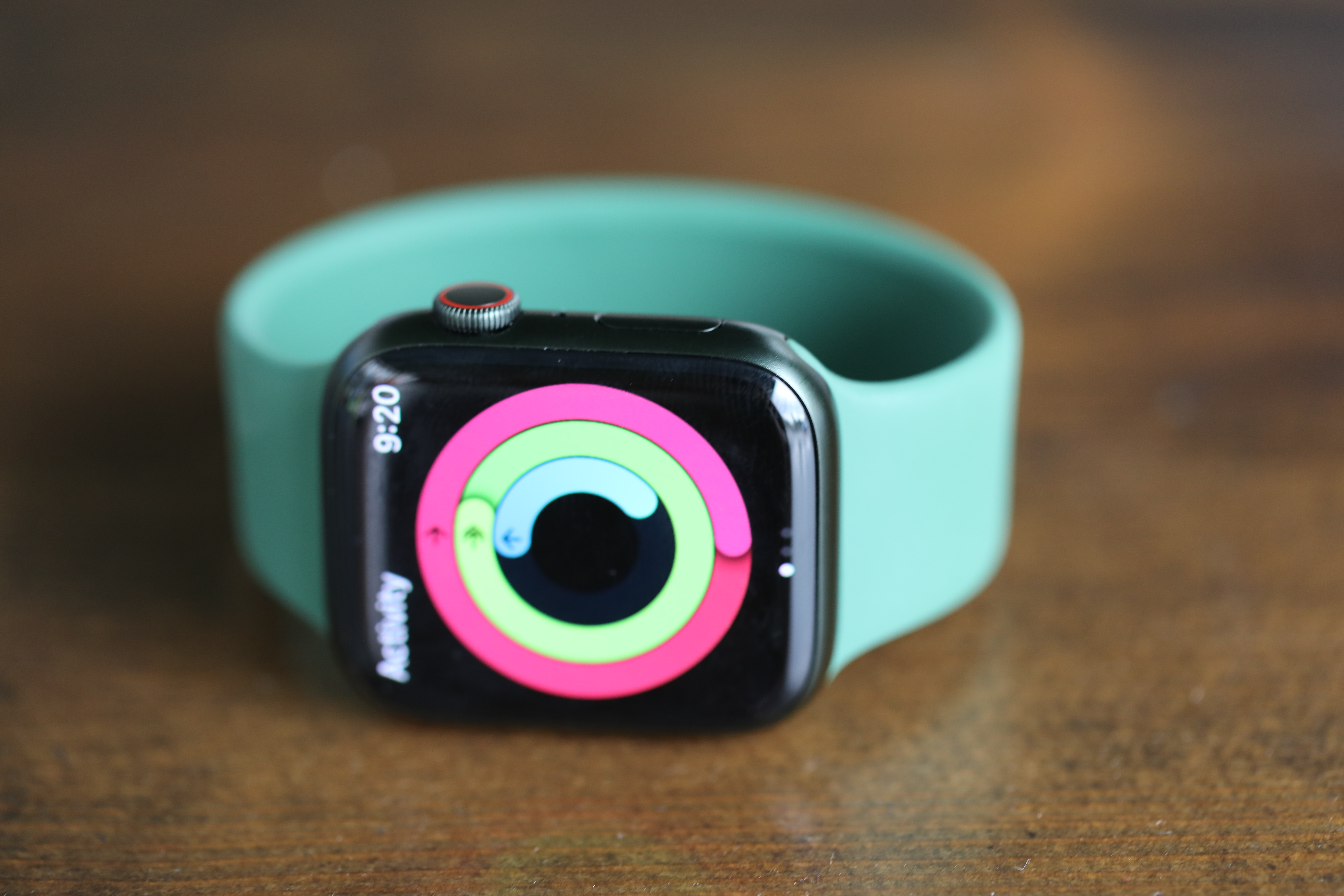 Some of the more outlandish rumors swirling around health-related changes proved wrong, as the company instead opted to focus on making some aesthetic changes to the device. The Series 7 marks one of the biggest changes to the device’s design in several generations, and even that isn’t what one might deem a radical departure. In fact, it’s the sort of thing you can walk around with undetected.

If, on the other hand, you’re a daily Apple Watch user, you’ll notice the difference on your wrist immediately. The upgrade from Series 6 to Series 7. The larger model (which we’ll be focusing on for the remainder of this review) bumps up from a 1.78-inch screen (measured diagonally, à la a smartphone) to 1.9 inches. That represents a 20% increase over the Series 6 and a 50% increase over the Series 3, which somehow manages to keep sticking around.

It’s not a radical departure, generation over generation. And certainly something like 12% larger buttons on the calculator aren’t enough to sell anyone on an upgrade. The truth is that the nature of wearables generally prohibits designers from making too radical a design change because the product needs to fit on your body. The earliest smartwatches suffered from large designs that prohibited wearability among a wide swath of users. 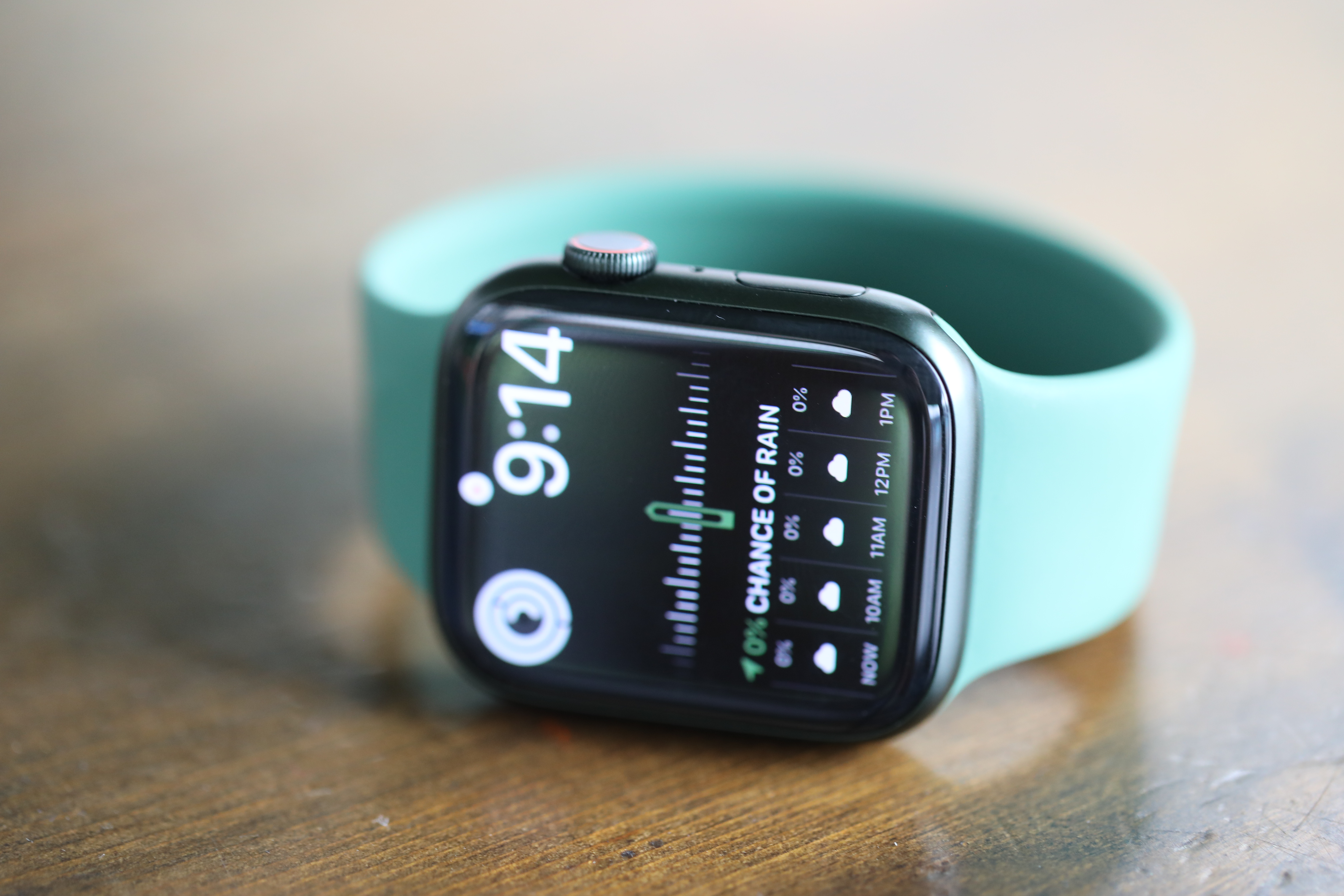 Any increase to screen size should be counteracted by a reduction in the surrounding hardware. This is achieved, in part, by a thinning of the bezels, down to 1.7mm. The black border hasn’t gone away entirely here, but it’s noticeably slimmer, even when compared to the Series 6. In spite of this, the company still had to increase the overall size of the case, from 40/44mm to 41/45mm. As someone who’s had some issues with larger smartwatch cases in the past (I’m looking at you, Samsung), I didn’t really notice a difference with the added millimeter here. It feels the same on-wrist and while wearing it to bed. I’m not sure I’ll ever feel fully comfortable wearing a smartwatch to sleep, but your mileage may vary.

Along with the added real estate comes adjustments to the UI that allow for a surprising amount of additional content — again, when dealing with a sub-two-inch screen, it really becomes a game of millimeters. According to the company, apps like Messages are now capable of fitting in more than 50% additional text than on the Series 6. In other cases, where less content is required, that means two larger font sizes added to the mix, so you get, say, bigger buttons on the passcode screen.

The biggest day to day change, however, is the addition of a full QWERTY keyboard for text input, either by tapping or sliding between letters with QuickPath. I’m surprised at how well both worked on the small screen. As soon as you open up the application, an “Apple Watch Keyboard Input” notification will pop up on your connected iPhone, asking if you’d like to input the text on iOS. In most instances, the answer is probably yes. But it’s nice to have the option if, you’re (gasp) going to be away from your phone for a bit. 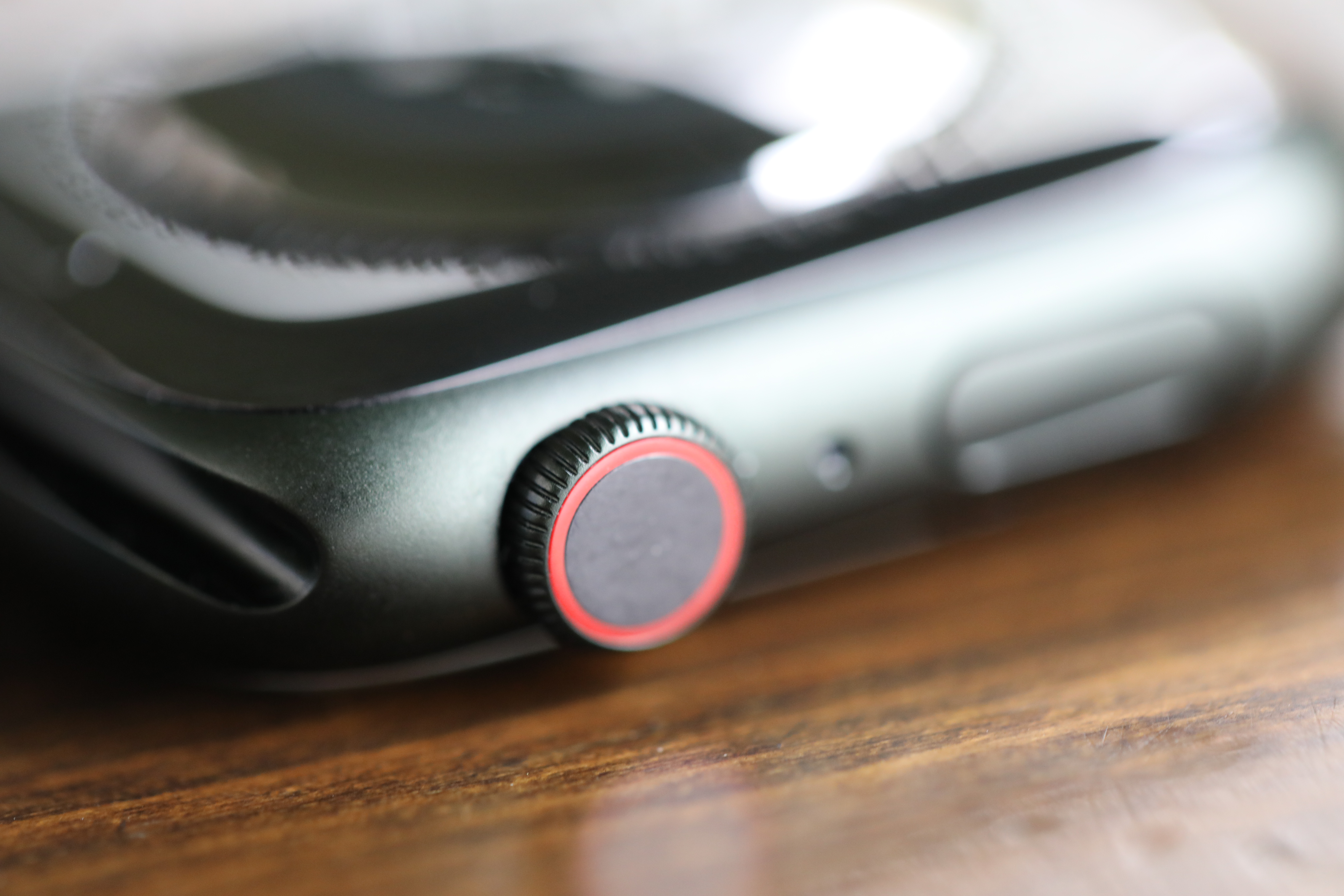 The new watch features a thicker display crystal, adding some ruggedness. Watches obviously don’t have as much opportunity to shatter as phones, but I have a bad habit of taking turns a little too tightly and smacking my watch on a door jam. Nothing’s shattered yet, but there have been some close calls. This is also the first watch to add dust proofing to the existing WR50 water resistances. At IP6X, the system is completely dust-tight.

The edges of the display curve a touch more, meeting flush with the case, making a bit more of the display visible when viewed from the side. The new Counter watch face, which stretches the numbers along the border, take advantage of this, while the other two new screens — Modular Duo and World Time — use the additional real estate to jam in even more watch complications. 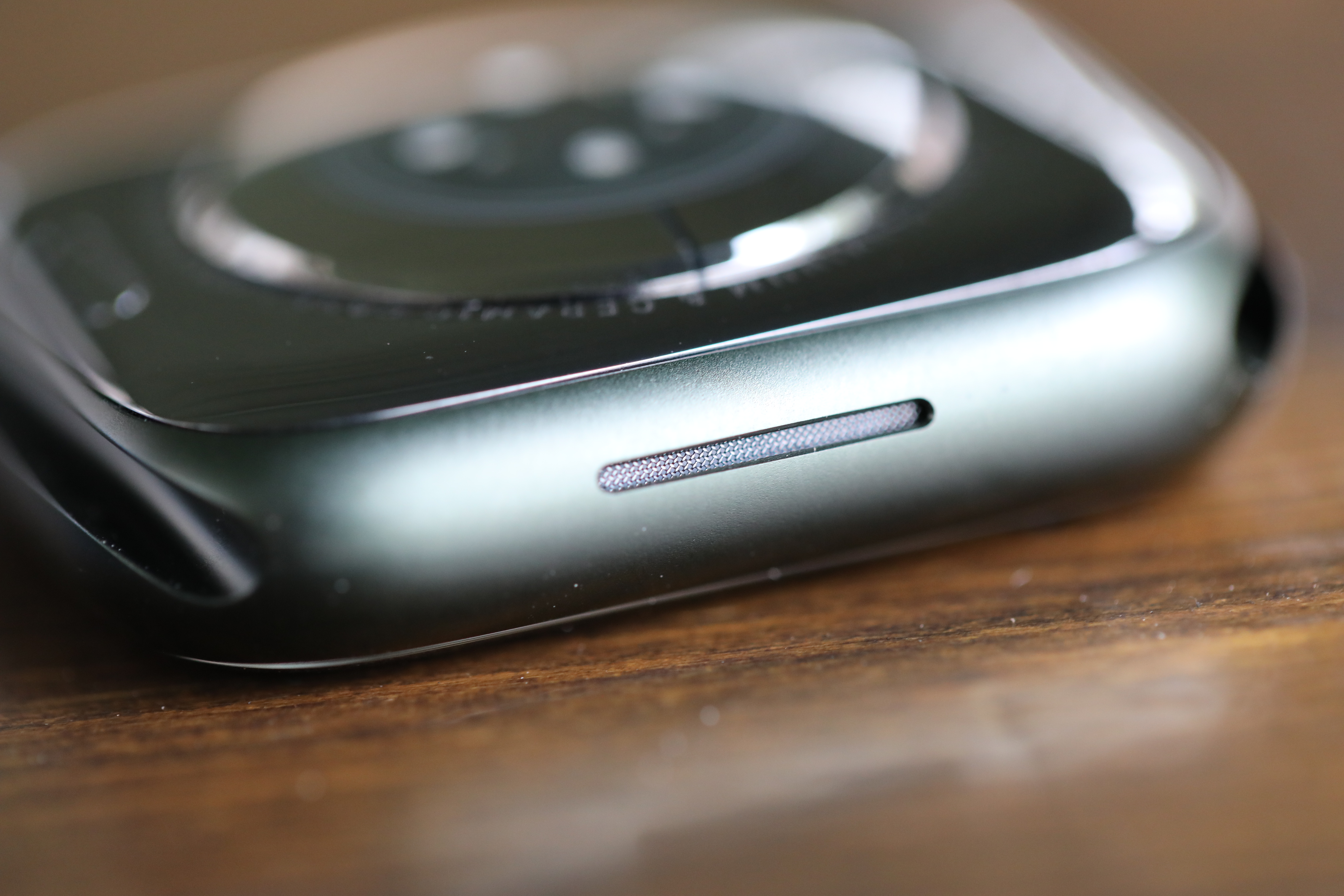 One of the upshots of a larger case is the ability to fit in a larger battery. Apple won’t say whether it’s actually increased the capacity here, so we’ll have to wait for the inevitable teardown. It seems likely the company bumped the mAh up a bit, though, in a bid to maintain the same battery life as before. Apple promises 18 hours, and indeed, you should be able to make it through a day no problem, in spite of a larger and significantly brighter (70% when inside, per the company) always-on display.

I was hoping the addition of legitimate sleep tracking would have meant a more aggressive approach to battery life, especially as some of the competition are touting multiple days on a single charge. What we do get, at least, is a new USB-C magnetic charger that is 33% faster than the one on the Series 6, giving you an 80% charge in around 45 minutes. What that means in practical terms is a full night’s charge in less than 10 minutes. So if you’re strategic about charging, you can effectively wear it day and night.

The new charger is backward compatible with older Watches, in that it will charge them at their standard speed. In keeping with Apple’s effort to reduce waste, the Series 7 doesn’t ship with a wall adapter, however. But it should work with the USB-C ones you (hopefully) have lying around. The company has some new bands, as well, though the 7 is also, thankfully, compatible with all of the existing ones on Apple’s site. 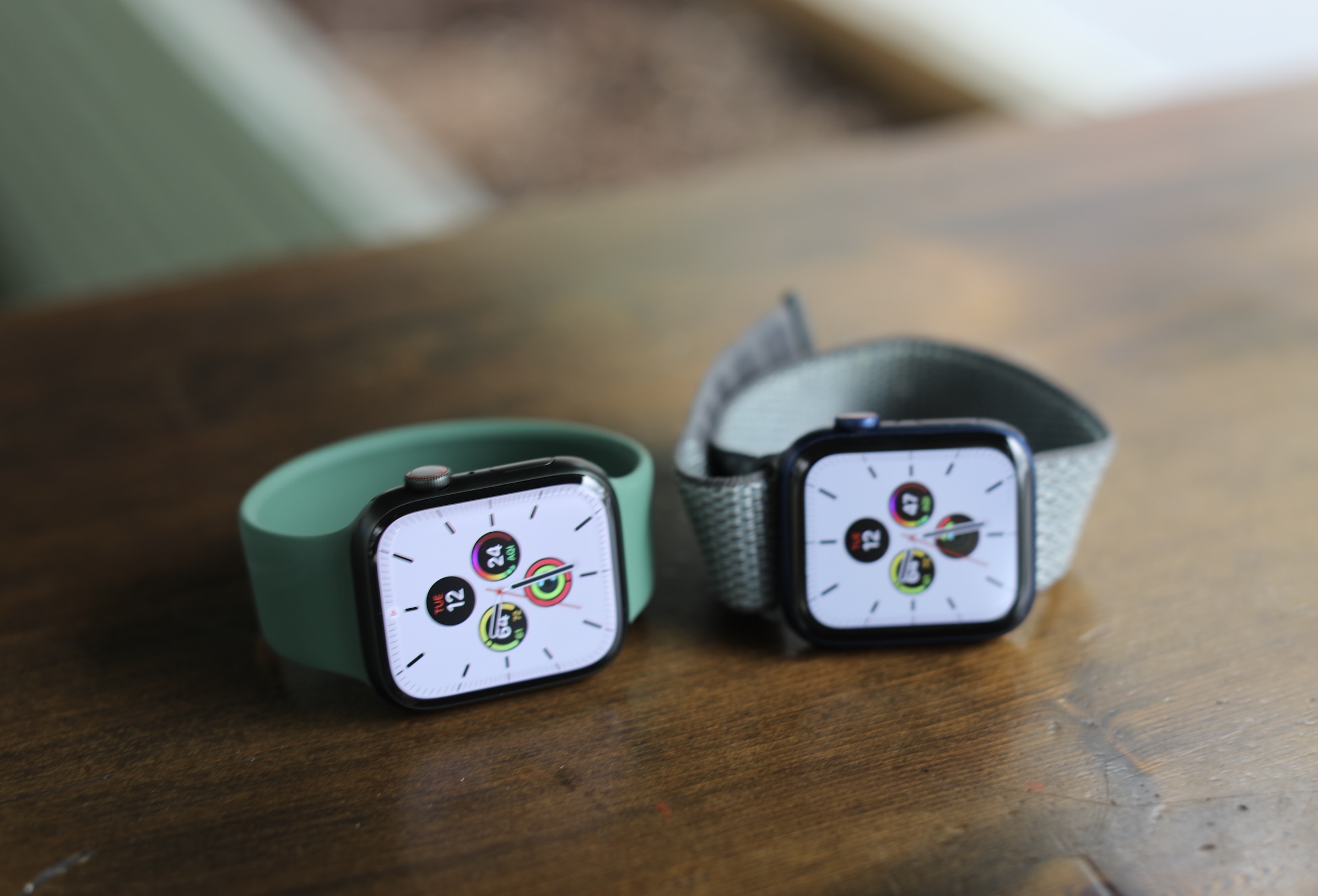 The sensors are largely unchanged, and the Series 7 sports the same processor and LTE chip as before. 5G for the Series 8, perhaps? The new colors are nice. Apple sent along the Green Aluminum, which is subtler than I’d anticipated. It’s a dark olive color, which is easily mistaken for a dark gray or black in certain lighting. If you want something that pops a bit more, go with the red or blue.

The Series 7 starts at $399 for the 41mm and $429 for the 45mm. Prices go up accordingly based on band type and finish. If you’ve already got the Series 6, it’s a not a huge upgrade. Assuming yours is still working, maybe wait a year or two to see what Apple has up its sleeve in the future, in terms of health and other features. As is, there are enough bits and bobs to keep Apple at the top of the pack.