Canva, the $40 billion software startup looking to make design accessible to everyone, has today announced a video editing suite.

Launched in 2013, Canva emerged during the design renaissance, around the same time that Sketch, Figma and InVision were crashing the Adobe party. Unlike the others, Canva focused on democratization of design, creating a UI that allowed anyone to make just about anything, from slide decks to t-shirts to social media assets.

Today, Canva continues on that trajectory in the world of video.

The Canva video software offers a scene-focused interface, meaning that users can break down their video into easy-to-manage pieces. From there, they can trim scenes (coming soon), manage multiple audio tracks and use in-editor video previews to check their work.

Canva is also offering video templates to simplify the process for users based on their end goals. For example, folks making a TikTok video are designing and editing in a different format than folks making Twitch banners.

Considering the growth in educational video — Canva says that 20% of knowledge workers either create or consume video for their job every single day — the company is also introducing screen and in-editor recording, so folks can record themselves or their screen to create a video for the rest of the team or organization. 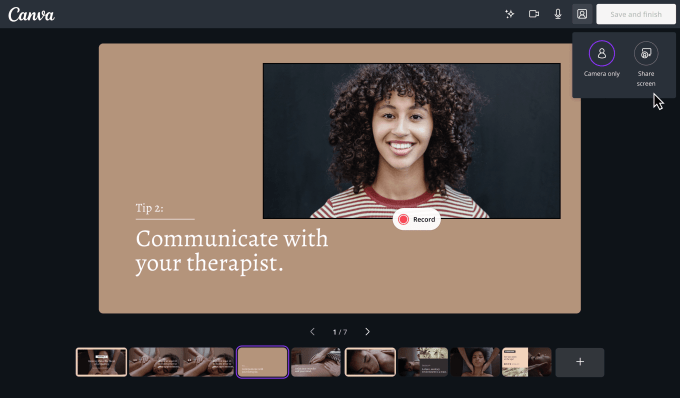 For users who are looking to polish up their video, Canva is also offering animations and automatic transitions in its classic easy-to-use interface.

Moreover, Canva Video is multiplayer, allowing users to edit in the same scene-based editor without having to download, reupload, etc.

In an email interview, Canva’s Head of Product Rob Kawalsky explained that the greatest challenge in building video creation software has been balancing the need for a powerful, robust tool with the simplicity of use that Canva has built its foundation on, adding that most video creation software relies on a multilayer editing timeline.

“We landed on our unique scene-based timeline, which splits videos into scenes that have a similar look and feel to presentation slides,” he said. “This feels instantly familiar, and also means Canva’s editor offers an almost identical editing experience whether you’re creating a static or moving design. Powerful editing features, like the ability to add animations, scene transitions and crop clips are available, but rather than having hundreds of confusing buttons at once, everything is context-specific — meaning the options present themselves as you need them.”

Canva Video is included as part of the company’s free tier.

Video represents a massive new frontier for Canva, which recently raised $200 million at a $40 billion valuation and announced plans to double its workforce yet again over the next year.

The company is on track to do $1 billion in annualized revenue for 2021 with over 500,000 teams using the paid product.

Video only fuels the growth of the company, which has mastered the process of going B2B from B2C.

“People come to Canva to design a specific format, but quickly realize they can do much more,” added Kawalsky.