Roughly two hours pass between my initial email and our first Zoom chat — on a Sunday, no less. I skip the post-gym shower and pop on a baseball cap, because I’m not sure when the opportunity will present itself again.

After more than two decades of espousing the benefits of vertical farming around the world, it seems Dr. Dickson Despommier is still every bit as eager to talk about the subject as I am. This is likely due, in no small part, to the tenth anniversary edition of “The Vertical Farm,” which arrived late last year. In a culture that seems almost irrevocably hung up on anniversaries, this occasion feels earned, largely due to everything that transpired in that intervening decade.

“Although there are at present no examples of vertical farms,” Despommier writes in the original edition, “we know how to proceed — we can apply hydroponic and aeroponic farming methodologies in a multistory building and create the world’s first vertical farms.” 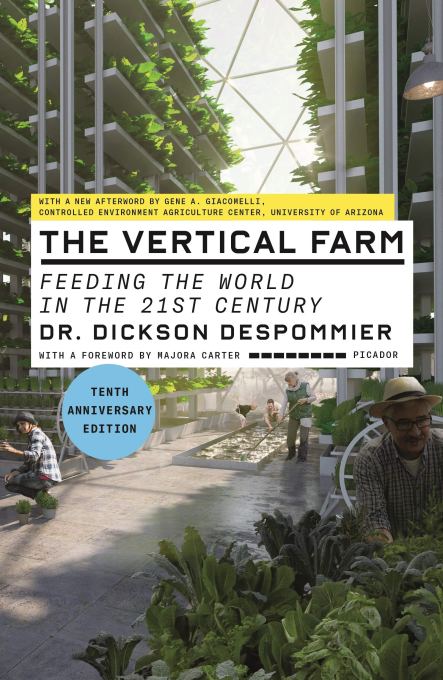 The latest edition of the book offers a coda in the form of a tenth chapter titled, “And Then What Happened?” The answer, as I’ve discovered in my own dealings with the world of vertical faming, is a lot longer than can one can hope to address in a single chapter — or, for that matter, a brief book review on a technology website.

“In 2010, when this book was first published, there were no vertical farms,” Despommier opens the new chapter, describing what began as a slow trickle in the U.S. and Asia. “As of this writing, there are so many vertical farms, I don’t know exactly how many exist.”

The list of vertical farms that follow is hardly exhaustive, amounting to four and a half pages and offering some concessions for space such as only listing Japan’s largest vertical farming company Spread, and noting the country is home to at least 200 such farms. The U.S. list, meanwhile, begins with AeroFarms and Bowery Farming, familiar names to TechCrunch readers.

Even devoid of an exhaustive list, the sheer number of countries and companies that have embraced the concept of vertical farming as a potential method to address the looming specter of climate catastrophe is an astonishing testament to what, for many, is the right idea at the right time. While few (if any) view the concept of tightly packed, vertically stacked crops grown in an urban setting as a catchall solution, there’s been plenty of momentum around the notion that it could be an important piece of that puzzle.

I doubt that, in the year 2021, many who pick up a book called “The Vertical Farm” need much in the way of convincing when it comes to human-made climate change. But Despommier still does a fine job spelling out many of the concerns in his introduction, especially as they pertain to apprehensions about population growth and overfarming. Beyond the clear (and I believe well-deserved) targeting of meat production, there’s probably still education to be done around the impact of food production in general.

These big issues were the catalyst for the development of the vertical farming concept. The modern definition of the idea was born as a thought experiment in a 1999 Columbia University class led by Despommier. A similarly titled “Vertical Farming” was published in 1915, but ultimately shares very little with what we understand the term to mean. (The book, written by American geologist Gilbert Ellis Bailey, is available for free online and includes some fun ideas about farming with explosives. It’s an entertaining way to kill an hour.)

In spite of Despommier’s status as an Ivy League professor (now emeritus at 81), “The Vertical Farm” is written in extremely digestible language. The book is less a blueprint or how-to guide than a continuation of his class’ early thought experiments — understandable again given the fact that there were no major vertical farms at the time of its initial publication. The nature of the book plays into its author’s notions of utopian idealism.

Bowery Farming CEO Irving Fain, who met with Despommier ahead of his company’s 2014 launch, summed up some of the sentiment well in a recent conversation we had, noting,

I think every industry needs a north star at some point. I think Dickson has been a phenomenal north star of the industry, in some ways long before everybody was sort of onboard and believing in indoor farming. Do I think everything he imagines will come to pass? Not necessarily, but that’s not actually the goal of a north star anyway.

This, I think, is the right way to approach a book like “The Vertical Farm.” Despommier is certainly a pragmatist when it comes to the threats of climate change, overpopulation and overfarming, but he’s an idealist when discussing the solutions. In a sense, it’s a breath of fresh air in an age when so many of us are (I think understandably) inclined to something far darker when faced with such existential challenges.

The strongest example of this dynamic at play are important questions around the energy use and costs of growing plants indoors, instead of directly harnessing the power of the sun. The book’s new chapter points to green solutions like clear photovoltaic windows, rainwater harvesting and carbon sequestration as answers. As more farms come online, there will be more opportunities to determine the complex math around whether such solutions are net positive. Hopefully more scale and better technologies will get us closer to where we need to be.

My time writing about startups, meanwhile, has made me, if not more cynical, than at least more skeptical about altruistic motivators in green technology. The pragmatist in me firmly believes that the bar of capitalistic drivers is the first one that needs clearing here — at least in the United States. Companies need to prove out that vertical farms can aggressively generate revenue and then, hopefully, we can see true advances on the sustainability side of the equation.

As a north star, to again quote Bowery’s CEO, the work is a supremely effective one. One need look no further than the agricultural revolution Despommier and “The Vertical Farm” helped catalyze a decade ago.

The Vertical Farm: Feeding the World in the 21st Century by Dr. Dickson Despommier
Picador, 2020, 368 pages

Everything is accelerating in the exponential age