Climate change has been the deepest, most challenging cognitive puzzle for humans to untangle these past years. It’s systems on top of systems, with emergent properties that can easily turn intuitive notions into catastrophic dead ends. Every action has a reaction or 10, and improving one part of the system almost invariably leads to weaknesses elsewhere.

Unsurprisingly given the scope of the challenge, complexity theory and “systems thinking” have become critical to comprehending Earth. It also happens to be a popular framework for technologists, fitting well with software engineering and technology products generally as well as society at large. Rather than see every little feature or change in the world atomistically, systems thinking builds relationships between all of them, finding connections where others only see disparate phenomenon.

In his profound and engrossing book “The Great Derangement,” celebrated Indian novelist Amitav Ghosh trains his sharply analytical and observant mind on the interconnections between humans and the planet, discovering counterintuitive relationships wherever he roams. An edited collection of a series of lectures he delivered at the University of Chicago in 2015, it’s a taut and provocative meditation, and one of the best I have read in recent years. 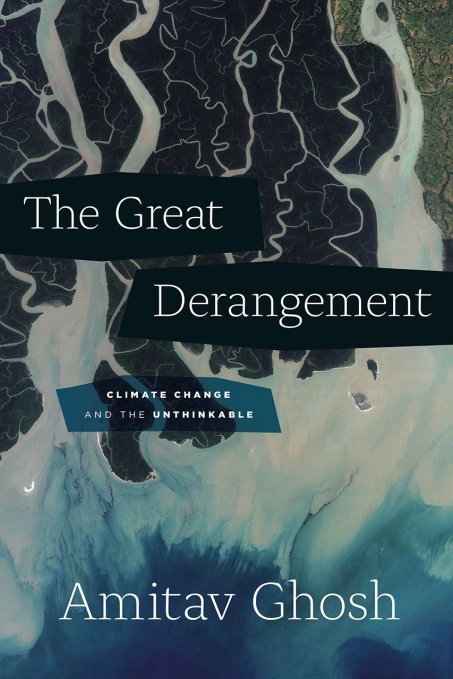 Ghosh’s main argument centers on the role of culture, and particularly literary culture, in contextualizing the climate crisis. He’s all but astonished to find it completely absent, which leads to the book’s title of the great derangement: that climate change is all but incidental to culture, a fact that’s insane in a world increasingly trembling from the daily crises of a planet under stress. In fact, “it could even be said that fiction that deals with climate change is almost by definition not of the kind that is taken seriously by serious literary journals: The mere mention of the subject is often enough to relegate a novel or a short story to the genre of science fiction.”

He narrates his own brush with climate change: a freak urban cyclone that nearly killed him when he was younger. Yet, as he reminisces on this incident, he realizes that his random brush with death would be impossible in the context of a plot. Too arbitrary, a narrative device that would seem hackneyed to even the most open-minded reader. His own lived experience — an authentic, real experience — impossible to write down since it seems almost impossible to have happened.

The likelihood of any individual catastrophe emanating from climate change is unlikely, but the totality of each of those many rolls of the dice all but guarantees frequent disasters. That leads Ghosh into a meditation on the history of probability. “Probability and the modern novel are in fact twins, born at about the same time, among the same people, under a shared star that destined them to work as vessels for the containment of the same kind of experience,” he writes. The randomness of life that was a feature of humanity for millennia became regularized with the rise of the industrial era — we took control of our environments and our destinies after struggling to hold back the chaos of our world. Probability thus became less relevant in the modern age.

Of course, it was precisely that penchant for control that has led to our current climate rupture. Our upgraded standard of living simultaneously cost us the very quality of regularity that we demand. The idyllic nature of the San Francisco Bay Area is now punctuated by successive climate crises, from droughts to wildfires. Our interwoven global community now stutters with supply-chain disruptions, travel cancelations, border closures and policy changes. Our system of regularity has become a system at war with itself.

Air conditioning is one of the greatest inventions of the 20th Century. It’s also killing the 21st

Part of the challenge in Ghosh’s mind is that culture has become centered on narrations of individuals, who are hopelessly outmatched today by Earth’s forces. He borrows from John Updike the phrase “individual moral adventure” to describe much of modern literature, particularly that produced in the West. We want a hero, a protagonist, someone we can viscerally connect with and understand their tribulations as they embark on a quest against challenges they eventually overcome.

The climate is a system though, and thus, practically impervious to individual action. As I pointed out in my review of Kim Stanley Robinson’s “The Ministry for the Future” today, it’s nearly impossible to engage a reader on the bureaucratic struggles that form the basis for any change around climate. There is no villain but all of us, and that just doesn’t match the kind of narrative readers and viewers expect.

Worse, the narrative needs of “individual moral adventure” leads us to a world in which the substance of the matter isn’t even the heart of the story. Ghosh decries where this leads, writing that “Fiction, for one, comes to be reimagined in such a way that it becomes a form of bearing witness, of testifying, and of charting the career of the conscience. Thus do sincerity and authenticity become, in politics as in literature, the greatest of virtues.” That leads to a declining level of agency for individuals and also for groups. “As the public sphere grows ever more performative, at every level from presidential campaigns to online petitions, its ability to influence the actual exercise of power becomes increasingly attenuated,” he writes.

While systems thinking can easily get truncated to just technical and scientific relationships, Ghosh has successfully expanded the bounds to include culture in the equations as well (his three parts in this volume are entitled “Stories,” “History” and “Politics,” which gives some idea of his intended contributions). It’s not enough to just peer into our natural ecosystems and see what’s going on, but we also have to understand how humans conceive and connect with these systems in the first place. His analysis offers another critical stratum on an already deeply-layered problem.

So where does this foray into culture, power and politics lead us? Ultimately, Ghosh sees an important place for traditional religious authorities to take charge on climate. As he writes:

Religious worldviews are not subject to the limitations that have made climate change such a challenge for our existing institutions of governance: They transcend nation-states, and they all acknowledge intergenerational, long-term responsibilities; they do not partake of economistic ways of thinking and are therefore capable of imagining nonlinear change — catastrophe, in other words — in ways that are perhaps closed to the forms of reason deployed by contemporary nation-states.

Ghosh touches on a myriad other subjects across this slim book, but his erudite and at times contrarian thinking successfully reframes many of the debates and points of reference around climate and future governance. As with all good systems thinking, his analysis ultimately others something synthetic: different lenses by which to understand a wicked problem. We should be fortunate that there is perhaps a path out of the morass.

Or not. For it’s clear that while debates around the climate have gone on for decades, we’re still doing little to actually solve the fundamentals. Ghosh quotes U Thant, the third secretary-general of the United States and the first from Asia, back in 1971:

As we watch the sun go down, evening after evening, through the smog across the poisoned waters of our native earth, we must ask ourselves seriously whether we really wish some future universal historian on another planet to say about us: “With all their genius and with all their skill, they ran out of foresight and air and food and water and ideas,” or, “They went on playing politics until their world collapsed around them.”

That history is being written now, and while the puzzle in front of us is indeed vexing, it’s neither impossible to comprehend nor impossible to solve.

The Great Derangement: Climate Change and the Unthinkable by Amitav Ghosh
The University of Chicago Press, 2016, 176 pages