Buckle up, it’s going to be a wild ride.

The pace of change over the last few decades is only set to accelerate in the coming years, as improvements in biology, medicine, spacecraft, manufacturing, software and more continue to transform the very foundations of society, economics and politics. We cover these innovations pretty much daily at TechCrunch, but we rarely get a chance to step back from the frenetic pace of funding announcements and startup product launches to take a look at what all these changes ultimately add up to.

Thankfully, London-based writer and entrepreneur Azeem Azhar is here to add some direction. He just published “The Exponential Age: How Accelerating Technology is Transforming Business, Politics and Society,” and has been the longtime writer of the Exponential View newsletter and podcast. I recently hosted Azhar for a live discussion about his book and the meaning of the world on a Twitter Space, discussing everything from genetic engineering to data privacy laws and the relocalization of global economies. Highlights from our hour-long conversation are compiled below.

This interview has been edited and condensed.

Danny Crichton: How did you get started writing your newsletter, Exponential View?

Azeem Azhar: I started this newsletter six years ago when my company had been acquired. I’m sure there are many founders on this Twitter Space, and some may have been through the process of being acquired, but it’s kind of a strange thing, because you find yourself wearing someone else’s clothes. It’s familiar, but it’s not familiar and it’s not you. So I just started to write a newsletter for a few friends of mine. I’ve been writing newsletters on the internet since 1996, and so it’s always my kind of go-to comfort blanket. 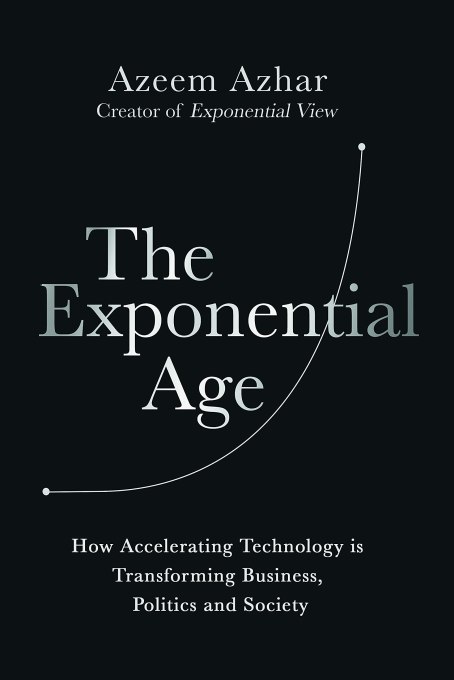 At the time, there was this strange situation, these kind of magical technologies on one side, and the sense that maybe stuff wasn’t playing out the way we expected on the other. I think that the newsletter, as many founders I think discover, just got product-market fit for that reason. It took off, and it sort of took over my life. I spent a lot of time reading about technologies and reading about the political and economic theories that kind of surrounded them and surrounded our societies. Eventually, that started to coalesce into a thesis that actually we are in a really special time in history, with a lot of opportunity but also a lot of peril, and that turns into the book “The Exponential Age.”

You talk about the rise of silicon, genomics, batteries and custom manufacturing, but these are all relatively new technologies in the context of human history. Why is this “exponential age” just starting right now?

When these technologies start, they’re expensive, and although they’re improving at these double-digit rates, they’re still expensive, and it takes time for them to become cheap enough to become more ubiquitous. Once they start to become ubiquitous for all of the complementary businesses, then you need to make them real for the rest of us living in the economy and in society more broadly.

So while we’ve had chips since the late 1960s, that moment where billions of us had access to computing really happens only after the the iPhone shipped and smartphones start to take off. This was roughly the same period at which renewable power started to compete with traditional fossil fuels.

I think that’s just a phenomenon of compound interest. With exponential technology improvement, things start off quite boring, and you have to build up a few years’, sometimes a few decades’, worth of gains, until that next year’s increment is really, really meaningful.

The point where I think we can say we’re entering into the exponential age is somewhere between 2013 and 2016. In 2012, many of the world’s largest companies were still companies of the previous era: the car companies, the oil companies, the electricity companies. But by 2016, all of the world’s largest companies were the Tencents and the Apples of this world. In 2012, less than half of humanity had real-time access to supercomputers, in the sense of how many people were carrying smartphones. By 2016, that had reversed.

We have all these new technologies, but we also have something you dub “the exponential gap” between what technology allows us to do and what society is prepared to handle. Could you talk about that?

The challenge here of course is that the technology provides all these incredible potentials, and we would really not be anywhere without it. But technology and social norms are closely interconnected to each other.

That’s fine when the rate of change of technology adaptation is sort of within the remit of the rate of change of the adaptation of social institutions like laws or regulatory bodies or just habits around the dinner table. But when the technology has reached this tipping point, which I think it has done in the last few years, and it changes so rapidly, then it’s a little bit like one of those three-legged races you might have done when you were at kindergarten or [elementary] school and your buddy runs much faster than you and you’re kind of left behind.

Technologies are adapting and developing incredibly fast, but our institutions — by their design — are meant to change very, very slowly. I mean, if they changed very quickly, they wouldn’t be institutions, they would be fads or crazes. And the problem is that, for most of us, our everyday lives are actually governed, whether we like it or not, by those informal customs and habits, and those really formal regulations, institutional rules and laws.

The challenge here is not so much about the technology; it’s the exponential gap, which if left unaddressed will start to really erode a sort of pleasant functioning of society.

You make reference in the book to the French historian Fernand Braudel, who wrote about many things but showed in some of his work the extraordinary regularity of medieval life. You could live 60-70 years and pretty much nothing changes socially, culturally, politically or economically. You were born, you worked on the farm, you continued working on the farm, you sort of retired from the farm, but there’s absolutely nothing that changes.

In the exponential age, everything changes all the time, and I’m curious how we are supposed to handle the cognitive load of all that?

The load is is huge.

You know, TechCrunch was partly my clock for what was going on here. Let me give you an example. While writing the book, I mention a Romanian company called UiPath, which does automation software. When I wrote the first draft, UiPath had a valuation of a billion dollars, and it had gotten there really, really quickly. By the time I got the comments on the first draft, which was a few weeks later, UiPath’s valuation had reached $7 billion. By the time I got the final draft into my editor, the valuation was $10 billion, and I’m having to change this in the text. Then just before the draft went to press, I called the editor and I said, “Listen, they’ve just gone public on the Nasdaq at a $35 billion valuation. And we have to go in and change that number right now.” That really encapsulates the kind of cognitive load that I’m writing about.

I have to take that burden on myself, but that level of cognitive load is being borne broadly by people because we don’t have the psychology or the brain geography frankly to deal with these exponential changes. We never had to come across, UiPaths, or Ubers, or DoorDashes that grow incredibly fast. Like Braudel points out, we saw things change very linearly and quite often cyclically and in understandable ways. So we’re not well adapted to this sort of techno sphere that we’ve created over the past 30 or 40 years.

You’re talking about a lot of exponentially improving technologies, but on the flip side, there are many technologies that one might have thought would improve exponentially and haven’t. I am curious what you think about some of the limits on technology growth and what that means for your thesis?

I think the question is really about where are there core technologies that lend themselves to this kind of fundamental learning rate and to a kind of composability. That is, they can be combined and integrated with other technologies, which tends to make them much more powerful. The technologies that can become modular and decentralized tend to be ones where learning effects become much more pronounced.

I think one question I’m interested in is what happens when the prices of these fundamental technologies start to drop effectively to zero. I know this is weird for any of us who spent $2,000 on a new MacBook Pro recently, but effectively, compared to where we were when we were born, the price of computing is essentially zero right now. And you can see that it creates all kinds of opportunities around it. Our ability to create energy from renewables, our ability to manipulate the biosphere — whether it’s through protein engineering or through gene engineering — and our ability to make stuff through these technologies of 3D printing … what happens when those costs go to zero?

One argument that you make in the book is how in the industrial era, there was this sort of globalization, but with the exponential age, we are seeing a sort of “relocalization,” which happens to have been intensified with COVID-19. I’m curious why we’re seeing that movement of productive forces?

Many of the technologies that we talk about are ones that don’t rely on enormous supply chains. Wind power and decentralized rooftop solar and virtual, grid-scale batteries made by networking the batteries within electric vehicles, all of those things can be done without shipping hundreds of millions of barrels of oil halfway across the globe.

You’re starting to see this in places like South Australia, where decentralized solar energy is weaning that state off coal. But you could also look at technologies like high intensity, vertical urban farms such as Bowery Farming, who will essentially chop a field up into a sort of a mini-skyscraper that can be put right in the middle of a city or a town and provide food locally so that you’re not optimizing your food for supply chain; you’re just growing it locally and powered by renewable power (see also our review on “The Vertical Farm“).

Then there’s cellular agriculture, which will deliver artificial meats and also doesn’t require fields of cows and can become highly localized. 3D printing gives us the same thing — we don’t need a factory miles away; you could just start to build things. All of that creates this potential for doing things more locally and relying less on on global supply chains.

That is one of the impetuses toward the local, but the second impetus is that there is recognition of a competition in the digital space between nations. Since I’ve written the book, the Cyberspace Administration of China (CAC) has taken strong steps to control that country’s internet industry, and I think also, interestingly, introduced new data privacy laws that are much more stringent than even the GDPR in Europe. One of the key lenses behind China’s data privacy laws is one about technological sovereignty.

So I think there are twin forces of technologies that enable production and consumption in the local that don’t rely so much on global supply chains, together with this move toward technological sovereignty. Together, they start to unwind some of the logic that policymakers have felt toward globalization and start to create a logic to do things more locally.

How culturally deranged is our climate today?