As the average cost of a ride on Uber, Lyft and other “rideshare” services has risen over the years, it’s become clear these companies were never entirely forthright about their business models. Now a pair of studies suggests even the investor-subsidized prices don’t tell the whole story, with costs being borne by drivers and communities.

One study is from Carnegie Mellon University, which analyzed some of the less obvious costs and benefits of transportation network companies (TNC, the favored term in public and academic documents).

For instance, after collecting a variety of data on the activity of TNC cars and users, the researchers found that rideshare vehicles tend to contribute less per ride to air pollution. This is because, as lead author Jeremy Michalek explains in a university news release, “When a vehicle first starts up, it produces a high level of noxious air pollution until its pollution control system heats up enough to be effective.”

Since rideshare vehicles don’t usually need to do a cold start for a given ride, and are generally newer cars with lower emissions to begin with, it’s estimated that a TNC trip produces about half the pollutants as the same trip done in your personal car. That amounts in their estimate to about 11 cents’ worth of value on average.

Good news, right? Well, kind of. The problem is that while the car may be more efficient in that specific way, the practice of “deadheading” (driving aimlessless or idling between jobs) and the need to drive to a pickup location pretty much wipe out those gains. Then when you factor in the increased traffic from cars technically not being “used” still being on the road, accidents, noise, etc., you end up with an estimated 45 cents per trip in costs to the community in general. So there’s a net increase in costs of about 34 cents per ride — a cost that is paid for by taxes or in lower quality of life. 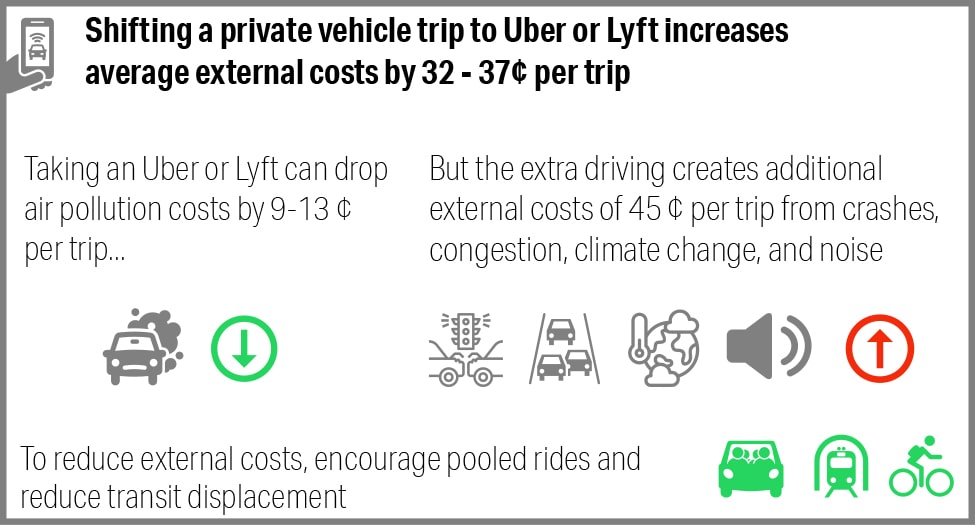 The suggestion the researchers make is to pool rides or use mass transit whenever possible — though of course in pandemic times those have their own drawbacks. Electrification of fleets would help, but that too has major immediate and long-term costs.

Gig workers in San Francisco are mostly people of color and many are immigrants, according to survey

Drivers themselves are carrying the weight of this “decentralized” industry as well. In a survey conducted among unionized drivers in Seattle, the University of Washington’s Marissa Baker found that most felt they received little or no support from the companies they work for.

Almost everyone was worried about getting COVID-19, obviously, and 30% thought they’d already caught it. Most had lost income, not surprisingly, and had spent their own money on PPE — less than a third said they’d received masks or sanitizer from the company. And those who stopped driving during the pandemic reported having trouble getting unemployment benefits. Notably in Seattle, drivers are overwhelmingly black men and often immigrants, groups that face their own compounding challenges.

“For workers who are in this kind of employment during the pandemic, they receive very little support from the companies that they drive for, and this is a population that had a lot of awareness of the potential exposures they could be facing,” said Baker in the release accompanying the study. In Seattle drivers are lucky to have additional protections not available in many cities, so folks in other locations may have it worse. (Delivery drivers were found last year to be facing many of the same problems.)

These studies are only a peek at the hidden costs and soft economics of the “gig economy.” Consumers most often hear from the companies themselves a version of these things viewed through rose-colored glasses, so independent inquiry, even if it’s just a survey or rough estimate of undocumented costs and behaviors, is incredibly valuable.