Analysts say the value of e-commerce in Africa is expected to reach $29 billion next year, yet Africans still find it difficult to make international payments for products online.

Cards, M-Pesa, bank transfer and mobile money, are the most common methods Africans use to make payments. But while various payment gateways have provided better experiences than how things were, say, a decade ago, there’s more work to be done.

Klasha, a Lagos and San Francisco-based startup, sees a niche in cross-border commerce and provides multiple integrations and APIs to facilitate transactions in that space. Today, it has raised $2.4 million in seed to scale.

Jessica Anuna founded Klasha in 2018. At the time, the company’s focus was to make it easier for African consumers to purchase products directly from global fashion retailers.

But Klasha is more than that now, she tells me. It has several features and a new business model centred around helping Africans make payments and get the goods they want (as long as they aren’t perishable), regardless of their location.

Klasha Checkout, which works a lot like Checkout, allows international merchants to collect payments from Africa in local currencies. And unlike Checkout or Fast that only works with international payments methods, Klasha uses what Africans are accustomed to — bank account, card, USSD, M-Pesa and mobile money.

The checkout solution can be integrated into any e-commerce platform, the company said. It has plugins for big-name e-commerce sites WooCommerce, OpenCart and BigCommerce and is set to sign an official partnership with BigCommerce, extending its reach to more merchants globally.

With KlashaWire, consumers can pay with African currencies: naira, cedis, shillings — via multiple payments methods, which Klasha then remits to merchants in dominant currencies like the U.S. dollar or euros in two business days.

Its payment links feature supports merchants that don’t have storefronts to accept payments by sharing links with customers via email or social media.

Next is its mobile application which lets users in Nigeria, Ghana or Kenya send and receive money. They can also create virtual cards and fund them with their respective currencies.

In addition to its payments play, Klasha is into logistics too. Anuna asserts that as Klasha combines both worlds of payments and logistics, it is opening up the global e-commerce economy to consumers in Africa and merchants looking to scale into Africa seamlessly.

“A lot of our merchants have said to us, if we’re going to be able to accept payments from Africa, we need a way to seamlessly ship to Africa in a short amount of time and provide the best end to end logistics experience for our consumers. And that’s what we’ve done,” remarked the CEO.

According to her, the logistics service helps African customers get their products from Europe or the U.S. in five to nine days, handled via partnerships with third-party logistics providers. On a lighter note, Klasha’s time frame is quite laudable compared to industry numbers of up to two weeks. 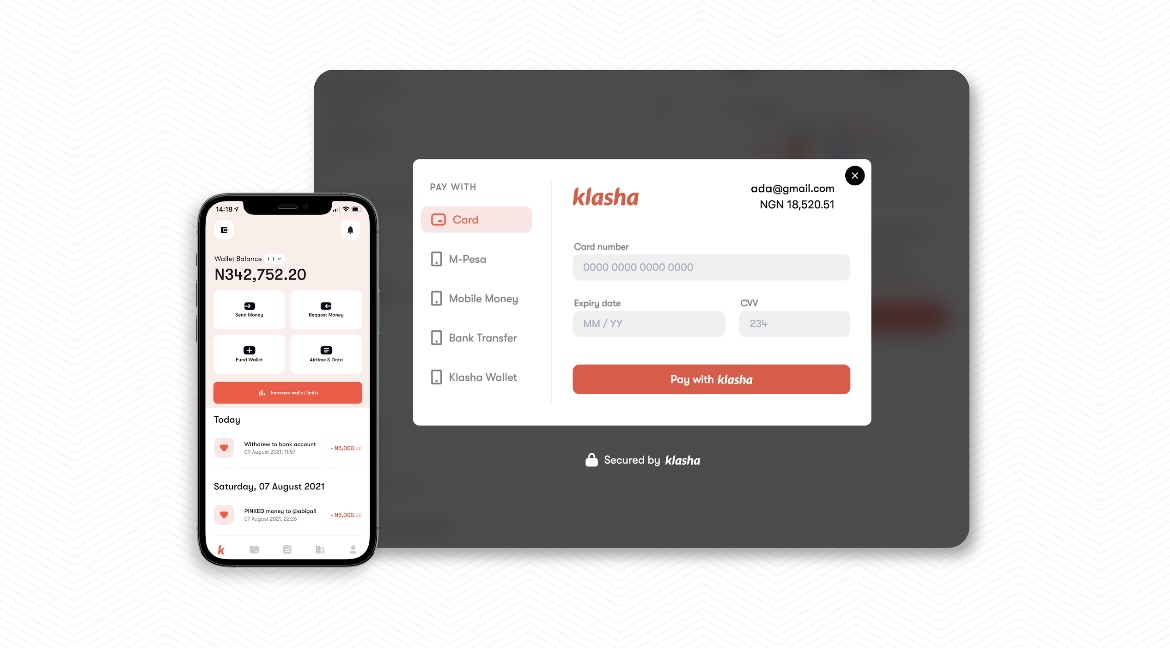 Since Klasha relaunched in May following some iterations, it has processed more than 20,000 transactions and claims to be growing 366% month-on-month. Klasha makes revenue via sales commissions and subscriptions retailers pay to use the platform for analytics to gauge how their products are faring in different markets.

“For a lot of these retailers, this is the first time they’ve ever sold into Africa before. So we offer a complete end to end e-commerce suite for them as opposed to having to use disjointed services that aren’t interconnected with technology,” she said.

Klasha’s technology allows for seamless cross-border transactions at a time when Africa is rapidly growing and needs both payment and logistics solutions for online commerce, Alison Lange Engel, a partner at Greycroft, said.

This is the third significant investment the venture capital firm has made in Africa after placing bets on unicorn company Flutterwave and AZA Group — a fintech company founded and led by Elizabeth Rossiello.

Like Rossiello, Anuna, 29, had industry experience before starting the Techstars-backed Klasha. The chief executive worked at Amazon and Shopify in London and subsequently started a logistics company in China. It was there, while running FMCG exports to the U.K. and U.S. for large wholesalers and suppliers, she figured that merchants in China (Africa’s biggest trading partner) needed more efficient ways to receive payments from Nigerian merchants.

The experience opened Anuna’s eyes to the world of cross-border trade and payments and this has proved vital in how she has been able to raise venture capital as a solo female founder.

Black female founders get 0.6% of global venture funding. There’s no data to depict the situation with African female founders, but if you could paint a picture, it wouldn’t be a pretty one.

But Anuna believes investors are starting to back more female founders, particularly in fintech where recent startup and VC activity have been eye-popping.

Klasha hopes to use the funds to help retailers such as ASOS, Zara and H&M receive payments from African consumers. With a customer base of 10,000 present in Nigeria, Ghana and Kenya, Klasha plans to expand into three more African countries before the year runs out.