CostCertified, a Canadian startup which provides real-time, interactive residential construction estimates, raised $8.45 million in a seed round of funding.

The company is also backed by Y Combinator (having participated in the accelerator’s S21 batch), I2BF Global Ventures, Soma Capital and a number of proptech/construction tech founders such as Willy Schlacks, CEO and co-founder of EquipmentShare; Ryan Sutton-Gee, PlanGrid co-founder and former COO; Jonathan Wasserstrum, co-founder and CEO of SquareFoot and Bill Smith, founder and CEO of Landing.

The raise marks CostCertified’s first external round of funding.

Put simply, CostCertified today is a price configurator tool for construction, but the Calgary, Alberta-based company’s end goal is to build the “Amazon for construction.” CostCertified allows contractors to send a shoppable interactive estimate to homeowners so that they can choose their selections during a project, and see the effect on price instantly. If you’ve ever performed a home remodeling project, you understand that this is something that would be incredibly useful considering all the various decisions required around vendors and products. Being able to see your options and how specific choices will impact your end cost in one place can certainly help make the project less stressful. 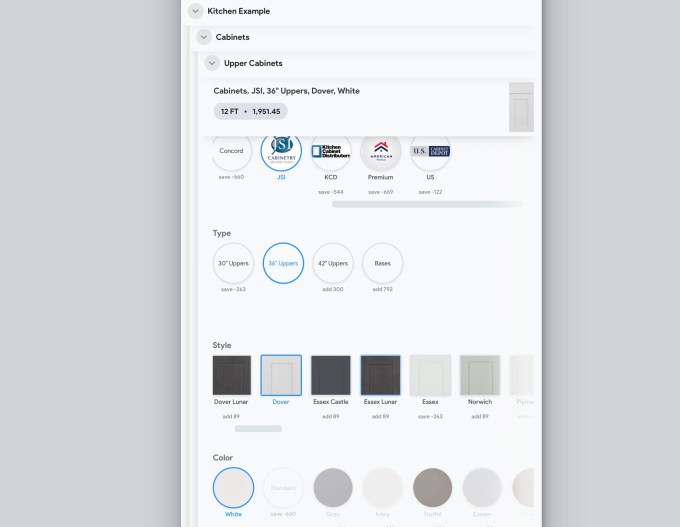 CEO Mike Bignold teamed up with David Vass to start CostCertified in 2017 after running his own construction business and realizing the need for contractors to provide estimates in a more modern way.

“I ended up booking a pretty large project. And I hired a really great project manager who was really good with construction but not comfortable at all with tech,” Bignold recalls. “And that job ended up getting delayed as a result.”

Bignold, who did some coding during college, put together a simple prototype of an app that generated a document with an estimate of project costs that was sent out via email to potential customers. Essentially, he had built a quoting engine that gave contractors a way to provide consumers with “an interactive, shoppable experience” while managing a project.

As a contractor, I didn’t have the tools to support the price complexity of a large construction project,” Bignold said. “I thought to myself, ‘Why can’t you buy or sell construction services with the convenience of an Amazon-like, or Shopify, experience.”

In 2017, he ended up selling his construction business with the intention of spinning out the app he had built into its own company. He teamed up with Vass, who had helped him get that contracting business “to the top of Google.”

Some of Vass’s other contracting clients were looking for a system similar to what Bignold had built so the pair got beta customers to use the app, and become early adopters.

“I don’t think I realized the complex problems that I was getting into solving for large construction companies,” he told TechCrunch.

The pair spent several years on R&D, iterating the app “over and over, listening to customers constantly.”

“There were big structural problems in the industry that we were trying to solve for,” Bignold said.

The SaaS platform came out of beta in early 2021, and today, CostCertified has $72 million in annualized GMV, and says it has seen 2,203% YoY growth (albeit it from a small base).

Users can do things like select their finishes, upgrade, downgrade and build their own renovation or new construction with real-time price changes.

The software also allows built-in financing and payments that CostCertified says automates workflow and, ultimately, reduces the cost and risk for everyone involved in such projects — from general contractors to subcontractors to the consumers.

“We leveraged our capabilities by bringing retailers, the people who sell things like countertops and plumbing fixtures, into the point of sale,” Bignold said. “By bringing all selections to the POS, customers know exactly what they are getting and what it will cost. The contractor can also make more money on upgrades and justify the cost.”

Today, CostCertified has a team of 25 and it plans to use its new capital in part to increase its headcount by over 100 people over the next year and on product development, sales and growth.

FUSE’s Brendan Wales said his firm was impressed with the CostCertified team’s “deep level of experience within the home renovation market.”

“They have lived the pain of being a contractor and built the product for themselves. The product is robust and fully featured for its stage; the product is far greater than seed stage,” he wrote via email. “The customers love the product and that can be seen in the monthly logo growth, which is compounding. Lastly, they are playing within a large global market and there are many ways to monetize this audience than just SaaS fees.”

Another unique thing about the startup, he said, is that most renovation software vendors often only think about how the contractors will use the product.

“CostCertified has put the contractor’s customer to the forefront,” he wrote. “They enable the end consumers of the renovation services to have a more dynamic and transparent service, more akin to a wonderful e-commerce experience, than a construction purchase.”