Apple is making a change to its App Store by returning the “Report a Problem” link to App Store product pages across iOS 15, iPadOS 15 and macOS Monterey devices. The link offers an easy way for users to report issues they’re having with an app, including whether it contains offensive or illegal content, or whether it was attempting to scam consumers out of their money. Apple had removed the consumer-friendly “Report a Problem” button from the App Store years ago, possibly to its detriment. New reports have suggested that many of the top apps are scams costing consumers millions and Apple has even been questioned by Congress over the situation.

The button’s return was spotted earlier this week, but Apple didn’t officially announce it until today.

The company says the “new” feature is currently available in the U.S., Canada, Australia and New Zealand, and will make its way to other markets over time. However, the feature isn’t technically “new” in the sense that it had never before existed on the App Store — a button like this used to have a prominent position in the App Store’s early days. 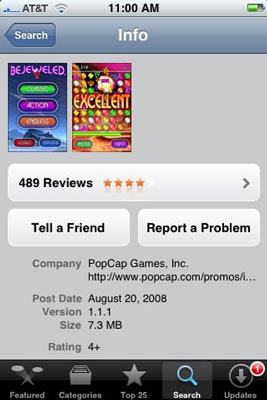 The button appears only on apps consumers have installed.

When clicked, consumers will be able to select from options like “Report a scam or fraud” and “Report offensive, abusive, or illegal content” at reportaproblem.apple.com. They will also be able to report issues with free apps that don’t include in-app purchases. 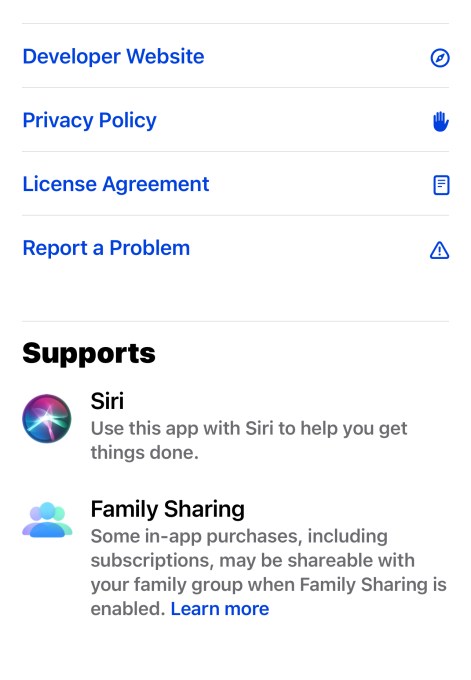 Apple’s App Review, Discovery Fraud and Live Moderation, and Financial Fraud teams will investigate these reported problems for signs of fraud, manipulation, abuse and other violations of the App Store Review Guidelines, Apple says. They will then reach out to developers to resolve the issues they uncover. There is no mention of any sort of immediate financial relief offered to consumers, however. Consumers still have to request refunds from this page as a separate process.

App Store scams have become more obvious, egregious, and, in many cases, more profitable since Apple shifted to the subscription model years ago. Almost immediately, bad actors took advantage of built-in tools to trick consumers into subscriptions, leading Apple to release new guidelines aimed at catching developers attempting to use “dark patterns” or other deceptive measures in their subscription apps.

One developer, in particular, Kosta Eleftheriou — who filed a lawsuit against Apple over revenue lost to scammers — has been making it his mission to highlight some of the worst scams on the App Store.

In addition to the scams that impacted his own business, where a rip-off of his Apple Watch app reportedly scammed consumers out of millions, he’s also uncovered scams that ended up making headlines because of how bold or disastrous they were for the end users. This included a crypto wallet app that scammed the user out of his life savings (~$600,000) in bitcoin; a kids’ game that actually contained a hidden online casino; and a VPN app that was scamming users out of $5 million per year.

Eleftheriou tells us he’s now looking into another case of App Store fraud, which he expects to publish soon, where a developer with millions of app downloads has been raking in tens of millions in revenue.

Eleftheriou’s work has raised questions about how much Apple has invested in fighting App Store fraud. After all, if a single developer can uncover scam after scam in his free time, why can’t the world’s most valuable company?

In fact, Eleftheriou even built a system to help him dig up the scams more easily. Called “Bunco Squad,” his tool offers a dashboard that displays an app’s metrics — like ratings, reviews, downloads and revenue, among other things, and assigns the app a trust score. As many scammers buy fake ratings, it’s fairly straightforward to locate potential scams by comparing an app’s overall star rating to a rating calculated only from written reviews.

The best way to complain is to build it yourself. https://t.co/Wm1PQQ3PyY pic.twitter.com/Y8uVkitSOL

Eleftheriou tried to publish “Bunco Squad” to the App Store, where it was — not surprisingly — rejected. Apple told him some of the information the app offered may be inaccurate, he says.

Issues around App Store fraud have even made their way to Congress this year.

Apple had been questioned about its seeming inability to rein in App Store scammers during a Senate antitrust hearing in April. The company, in part, has justified the commissions it charges developers because of the work it does to maintain a safe and trusted app marketplace — which includes fighting fraud on developers’ behalf. The Senators wanted to know why, then, we had to rely on journalists and other “open source reporting” (a comment likely referring to public efforts, like those from Eleftheriou), to uncover such App Store scams.

Apple’s response at the time was that fighting security and fraud was a “cat-and-mouse” game and that it was working to improve.

The company also issued a statement, of sorts, in its announcement about the App Store change which is likely meant to squash the rumblings that it isn’t working hard enough on fighting fraud because scam app revenue contributes to App Store profits.

“Problematic apps diminish the App Store experience for users and developers, and we’re constantly expanding techniques to identify even more types of problematic content for removal. If we suspect that a developer has engaged in purposeful manipulation, fraud or abuse, we will notify them and take action,” the company said, adding that problematic apps may be removed and their developers may lose their membership in the Apple Developer Program.

“We are deeply committed to protecting users from problematic apps so that the App Store continues to provide an incredible opportunity for all developers,” Apple added.