Uber is piloting new app features aimed at making air travel more hassle-free, including the ability to reserve rides from airports, gain access to enhanced curbside pickup, request a ride once you land and order food in advance from airport restaurants for pickup.

Uber Reserve at Airports will allow users at 20 major airports across the U.S. — including LaGuardia, JFK, Miami International, Dallas/Fort Worth and Ronald Reagan International — to book a ride up to 30 days in advance. The new feature, which includes complimentary wait time of up to one hour, is connected to airport departure and arrival KPIs so it can track flights and automatically adjust reservations if a flight is delayed or early. Uber has also upped its machine learning technology to allow for a feature that helps match riders waiting at airport curbsides with drivers more quickly. 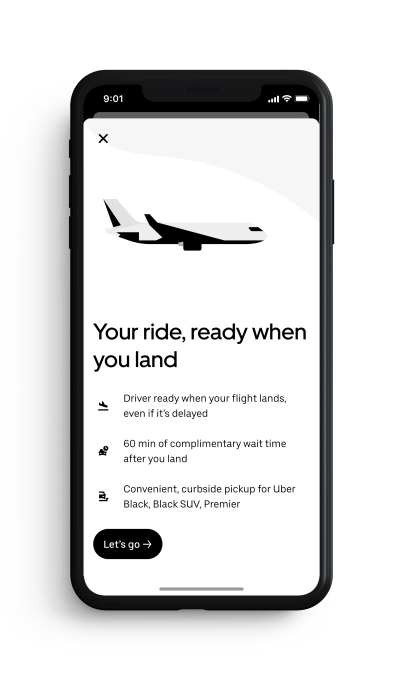 While it’s not exactly news that a car service is going to start accepting airport reservations, this move demonstrates how Uber is using its brand recognition to pivot away from on-demand and toward more traditional black car services. The announcement comes at a time when Uber is working to increase revenues after massive losses last quarter. With air travel beginning to climb back up to 2019 levels, the company has a chance to offer a more luxury, bespoke (and expensive) service to riders.

Airport trips are a good target for revenue growth because they’re typically longer and have higher fares, according to Uber. The company says just over the last week of September, it’s seen a 15% increase in airport trips, so the new reserve function will potentially give drivers the option of earning more money, the ability to plan their day in advance and more control knowing where a pickup starts.

As part of the new feature rollout, Uber is also offering a “Ready When You Are” service that falls somewhere in between on-demand ride-hailing and booking in advance, without an increase in fare. Customers can request a ride once they land with options to be picked up in 20 minutes, 10 minutes or as soon as possible. This feature is being piloted at six airports in the U.S. and Canada, but Uber says to expect a larger rollout through the start of next year.

“Different airports and cities have different regulations and laws that we have to keep in mind,” Jain told TechCrunch. “The complexity amplifies when you get to international airports. Also the pickup zones, the walking distance between where passengers arrive and where ground transportation is available varies and the way the signage works for airports is different, so working with airports is always a challenge, but an opportunity as well.”

Finally, Uber is also tapping into humanity’s collective fear of being in crowds for too long with its Mobile Ordering for Pickup feature, which allows customers to skip the line by using Uber Eats for pick-up while at the airport to order from select restaurants. This feature is currently piloting at Toronto Pearson Airport, and will continue to roll out to U.S. airports in the coming months, says the company.