As competition for creator talent heats up, Snap today introduced a series of new tools, programs and features that will enable creators on its platform to generate revenue. These include the expansion of a Gifting feature to worldwide creators, the expansion of the Creator Marketplace to include Snap Stars (top creators with verified accounts), the launch of a how-to resource called the Creator Hub and a new way for Snapchat creators to be rewarded for making short-form video for its in-app TikTok rival, known as Spotlight.

The latter, called Spotlight Challenges, will offer cash prizes for top-performing Spotlight content, as directed by Snap itself. This is different from other social apps’ Creator Funds, which pay out based on metrics like views and engagement to anyone who qualifies. Instead, this is a “chance” to win cash where each individual challenge will reward an average of 3 to 5 creators as the winners — though sometimes that figure will be more or less, Snap notes. The minimum prize will be $250. Typically, the total prize pots for individual challenges will range from $1,000 to $25,000, but Snap says it may sometimes offer a larger sum.

The challenges will be designed to encourage the use of specific Lenses, Sounds or #Topics, rather than paying out for any top-performing content. These challenges will be featured on Spotlight’s “Trending” page, which you access by tapping the trending up icon in the top-right of Spotlight’s main screen in the Snapchat app. Here, users will be able to view the available challenges, read the details about submission details and associated prize, then tap to open the camera and create content.

The addition follows complaints expressed by Snap creators who had earlier this year grown frustrated with Spotlight payment delays and later, the dwindling amount of money they could earn. While previously, Snap was paying out an incredible $1 million per day to get its TikTok competitor Spotlight off the ground, it stopped that program in late May saying it would decrease payments to “millions” per month as of June.

But creators who had grown to expect larger paydays were not happy with the change, and some began to look for better opportunities on other apps. Today, there are many options to choose from, as Facebook, Instagram, YouTube, TikTok and Twitter are all trying to woo creators in their own ways — including, in some cases, with direct payments in addition to revenue sharing from ads.

Snap’s new system of “challenges” would seem to offer a bit more transparency around payments, as creators will be able to see in advance what the prizes may be. But on the flip side, and perhaps most importantly, it signals to creators there is no guaranteed payday coming here — it’s a “prize,” not a paycheck. That means creators could still produce well-performing content and not “win” the cash.

However, Snap tells TechCrunch it’s not replacing creator payouts with prizes. The new feature will be in addition to the millions it distributes per month to the top Spotlight creators.

The new feature will be rolled out in the U.S. next month on iOS and Android before expanding to more markets. 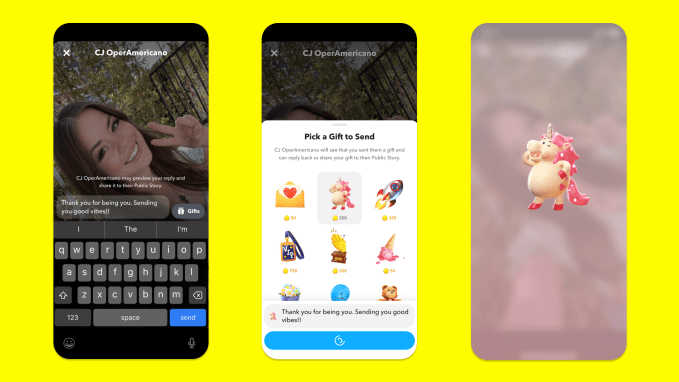 Other additions today include a Snapchat Creator Hub that offers information about getting started in Spotlight and other tips and the expansion of the Gifting feature to Snap Stars worldwide (see above). This feature had been announced in May and allows fans to support creators using Snap Tokens through Story Replies. The Snap Stars receive a share of the revenue from the Gifts they receive, as a sort of virtual tip.

Snap is also expanding the Creator Marketplace, which was previously working to connect Lens creators, developers and partners with businesses that wanted to run AR ads with their support.

Now, the marketplace will serve another purpose as well: it will connect businesses with Snap Stars worldwide for brand deals. This is how creator marketplaces across other top social platforms, like Facebook, Instagram, TikTok and YouTube, already work, so this is a bit of catch-up on Snap’s part. 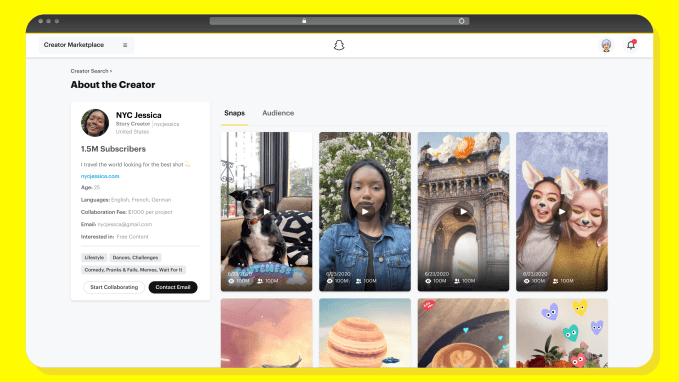 Related to this move, Snap is also introducing a “Sponsored by” tag for businesses with Public Profiles so Snap Stars can tag brands in their sponsored content for transparency. In this case, 100% of the transactions will go directly to creators, Snap says.

Despite the changes to Snap’s earlier monetization efforts, the company claims the production of Spotlight content is booming. During its second-quarter earnings call, Snap said Spotlight submissions more than tripled, daily time spent per user in the U.S. grew over 60% from the prior quarter and daily active users were up 49%.

To date, Snap has paid out over $130 million to creators, it says. And it has seen “all-time highs” in terms of the number of creators posting to Spotlight since the June 1 revamp, the company noted.