Nintendo seems as unable to let go of its decades-old franchises as it is unwilling to stop reinventing them. But in Metroid: Dread the company has acknowledged that sometimes it really is better not to mess with a good thing. The game’s traditional approach may not move the genre forward like some recent standouts, but it’s a hell of a good time to play.

The first new “mainline” Metroid game to come out in more than a decade, Dread is a direct sequel to Fusion, though I’ll spare you the plot summary — like Mario and Zelda games, the story is secondary to the moment-to-moment experience. But suffice it to say that galactic bounty hunter Samus Aran finds herself stranded on ZDR, an alien planet she has been sent to investigate, and afflicted with an inexplicable “physical amnesia” that prevents her from using all the abilities we all know by now.

What follows, as far as I am permitted to say within the confines of Nintendo’s review guidelines, is a very Metroid-esque tunnel crawl through environments artificial and natural, all the while collecting new weapons and abilities that unlock new paths and generally imbue you with new power and confidence. In other words, not much has changed since 1986.

The first thing that must be said about Dread is that the controls and gameplay feel of Samus are wonderfully fluid and responsive. This was a big worry for me, as the feel of the main character is one of the most important parts of any game like this. In Hollow Knight, your character feels crisp and precise; in Blasphemous, he’s deliberate and weighty; in newcomer Death’s Door, smoothly maneuverable. In Metroid: Dread, Samus feels fast and agile. 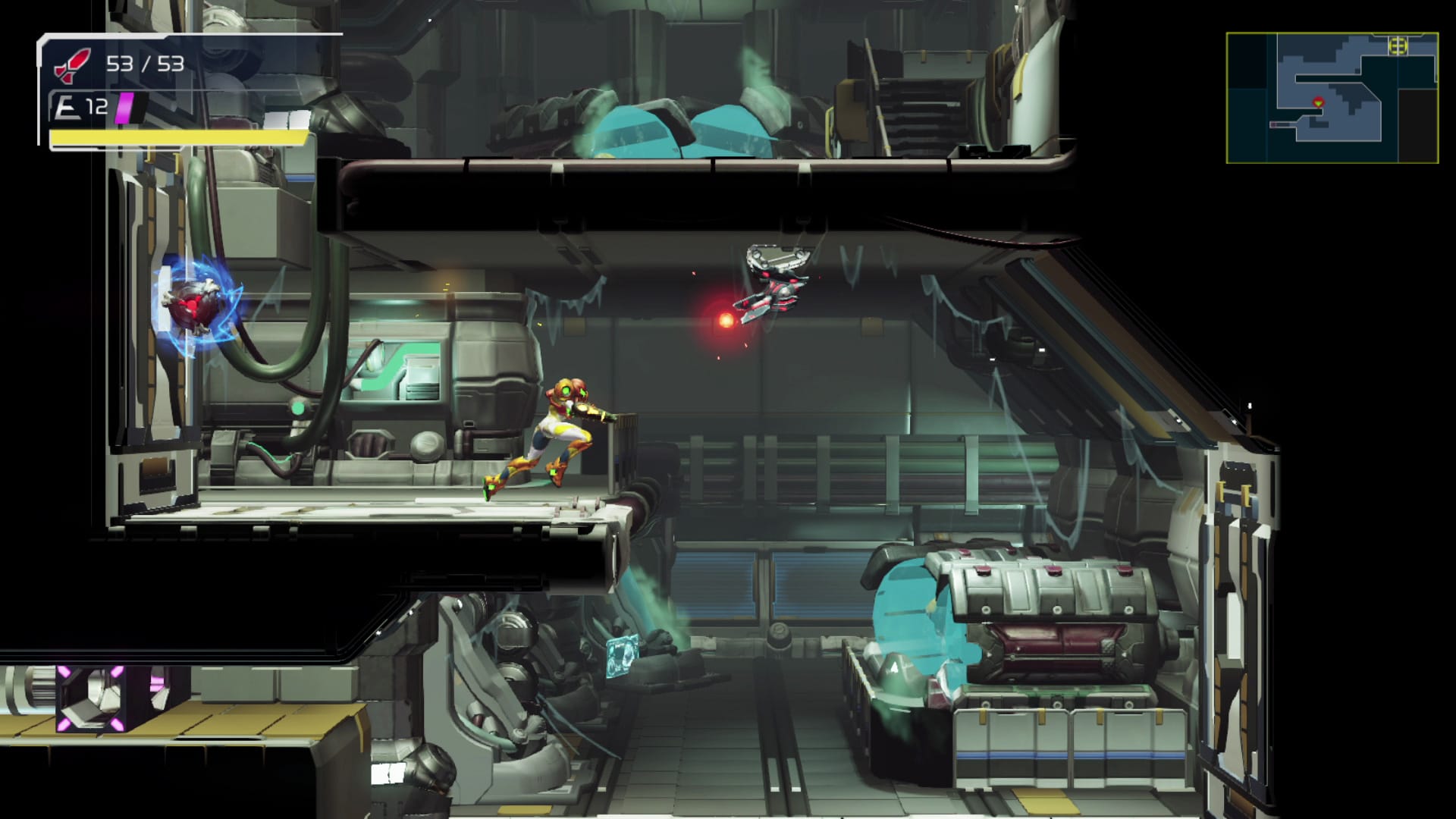 Running at a steady 60 FPS, and with a base movement speed that feels like a sprint rather than the sedate jog Samus has sometimes used, it’s clear in this game that you are meant to be both hunter and hunted, moving quickly and responding quickly. Every action is fast and at your fingertips, and the game seems to want you to play on the run, picking off enemies at speed rather than hanging back in safety. You feel reasonably powerful, but your agility is your best asset.

That’s especially true in Dread’s signature areas where invincible hunter-killer robots known as EMMIs roam, listening for Samus’s step and pursuing doggedly if they detect her presence. Fast and able to scale walls and creep through hidden tunnels, EMMIs are rather like Alien’s xenomorphs, and like one of those, if it gets hold of you it’s all over unless you can pull off a counter with very precise timing. 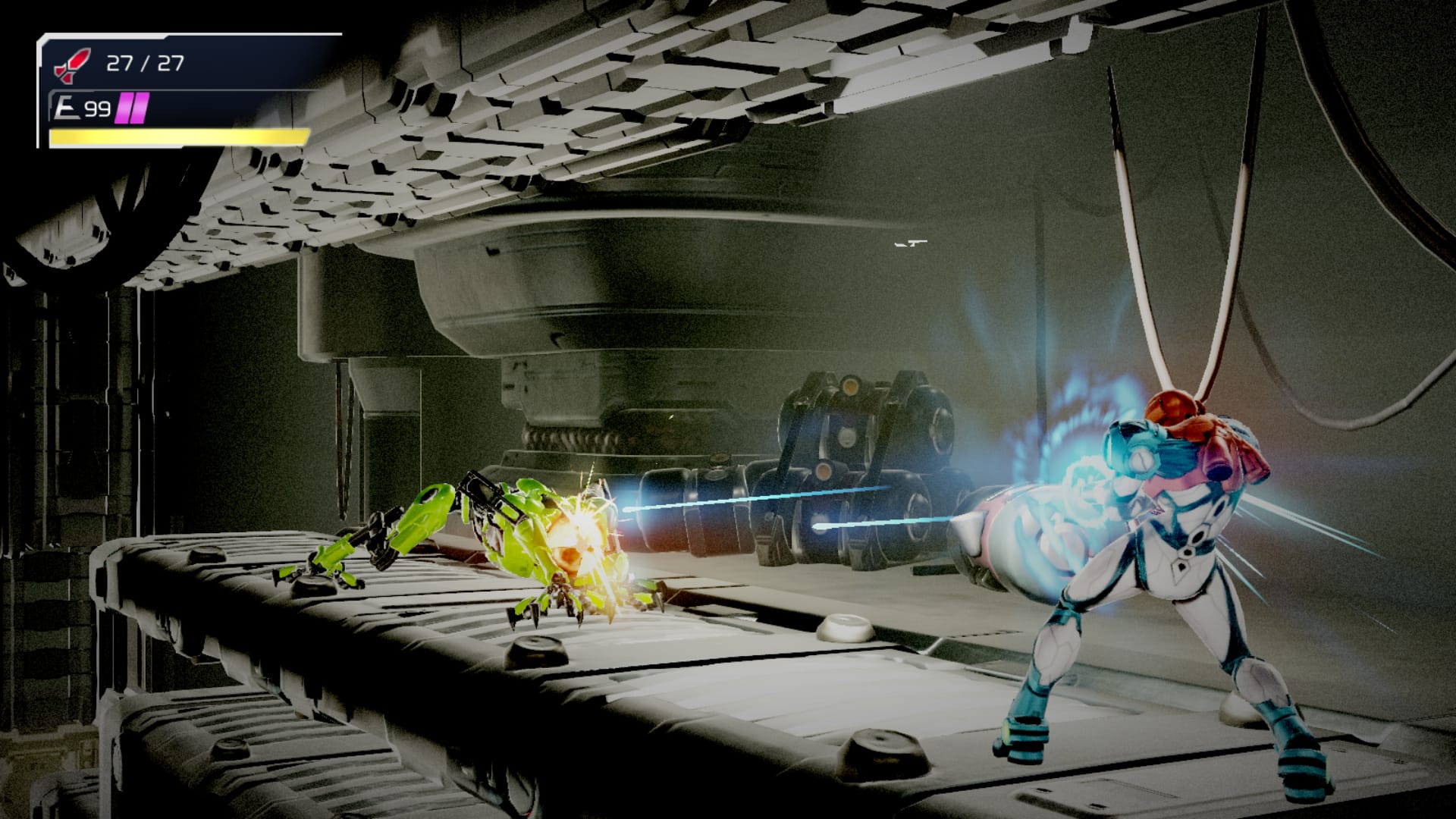 Let’s be very clear on this: you will die in Metroid: Dread, and you will die a lot. Probably about half the time it will be an EMMI, which clambers out of a chute right in front of you and snatches you up as you panic, or corners you as you’re trying to find a safe place to hide. The rest of the time it will probably be as you learn the unforgiving patterns of the various bosses. The overworld doesn’t seem quite so threatening once you have an energy tank or two — but when you enter one of those special EMMI zone doors (and thank god it saves when you do), your stress levels will skyrocket. Even the cloaking ability you gain a short way into the game is alarmingly limited in preventing your capture. And your one surefire way of defeating them, paradoxically, requires you to stand your ground, which is even worse than running away!

For the most part the game is tough but fair — I doubt it will present much of a challenge to the more masochistic class of gamers who do no-hit runs of Demon’s Souls, but it provides a consistent level of danger such that you’re always relieved to reach a save room. I’ve played up to the very end of the game and while there are definitely some difficulty spikes and some hilariously difficult counter timings, generally after a few tries you’ll understand what the game requires of you. Or you’ll get lucky.

You won’t be doing anything in the pause screen other than checking the map or re-checking the tutorial for a new item — there’s no inventory or loadout, every action is available by some combination of buttons, and this can get a bit unwieldy. Hold left bumper to free aim, right trigger to activate grapple, left stick to aim, jump with B and then hit Y… if you can. 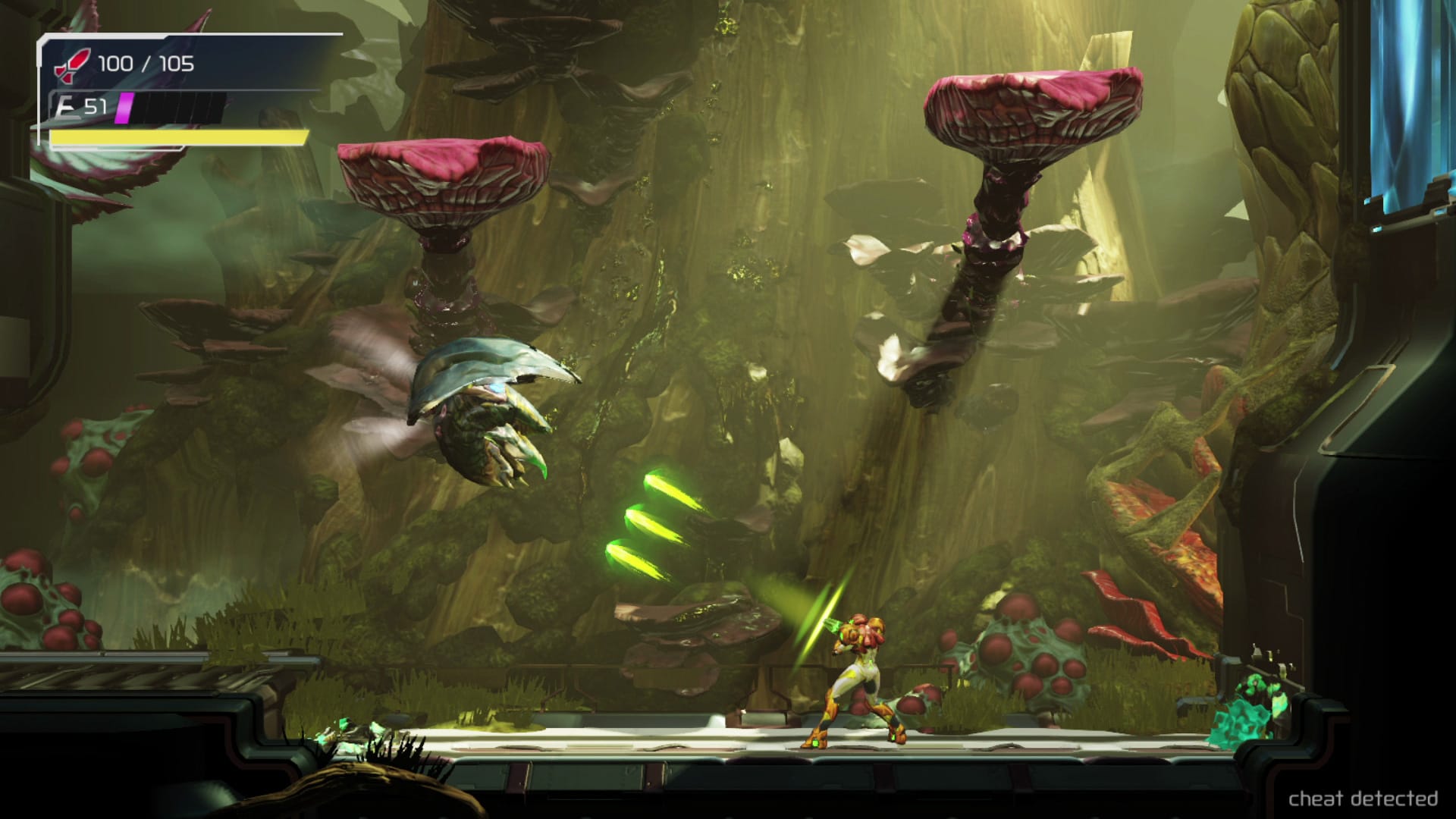 While as mentioned, the story isn’t really the point of Metroid games, it is valuable, and the events in Dread do provide interesting beats and revelations in the ongoing saga. I’m forbidden to speak of it beyond the first couple areas, but I can say that compared with my personal favorite, Hollow Knight, there isn’t a lot of emotional investment. In that game, the combination of visual storytelling and music was a wonder to behold, and you got a sense of the places you visited being storied and tragic. In Dread, they feel much more like video game levels — with different feels and themes to be sure, but without the kind of ineffable consequence that has become a part of gaming vocabulary especially since the likes of Dark Souls.

The upside of that is that the level designers engineer these places very, very cleverly. The way you are funneled and looped through locations in the first few areas in fact makes them almost completely linear, yet you feel like you’re ranging around and following your nose — “Ah,” you think, “I remember seeing a door that I couldn’t open before… I’ll go back there,” not realizing it’s literally the only place you can go. Fortunately the upgrades you get to suit and weapons usually feel consequential outside acting as a key to open certain doors.

There are certainly points where things open up somewhat, but this is very much a guided tour of ZDR. At times it can even feel too restrictive and streamlined — while there is certainly backtracking, much of it is obviated by suspiciously conveniently placed teleporters, which tend to take you exactly where you need to go next. It takes a lot of the guesswork out of the game, which is a mixed blessing — I’ve been stumped in Metroidvanias many a time, but figuring out what to do next is part of the challenge. 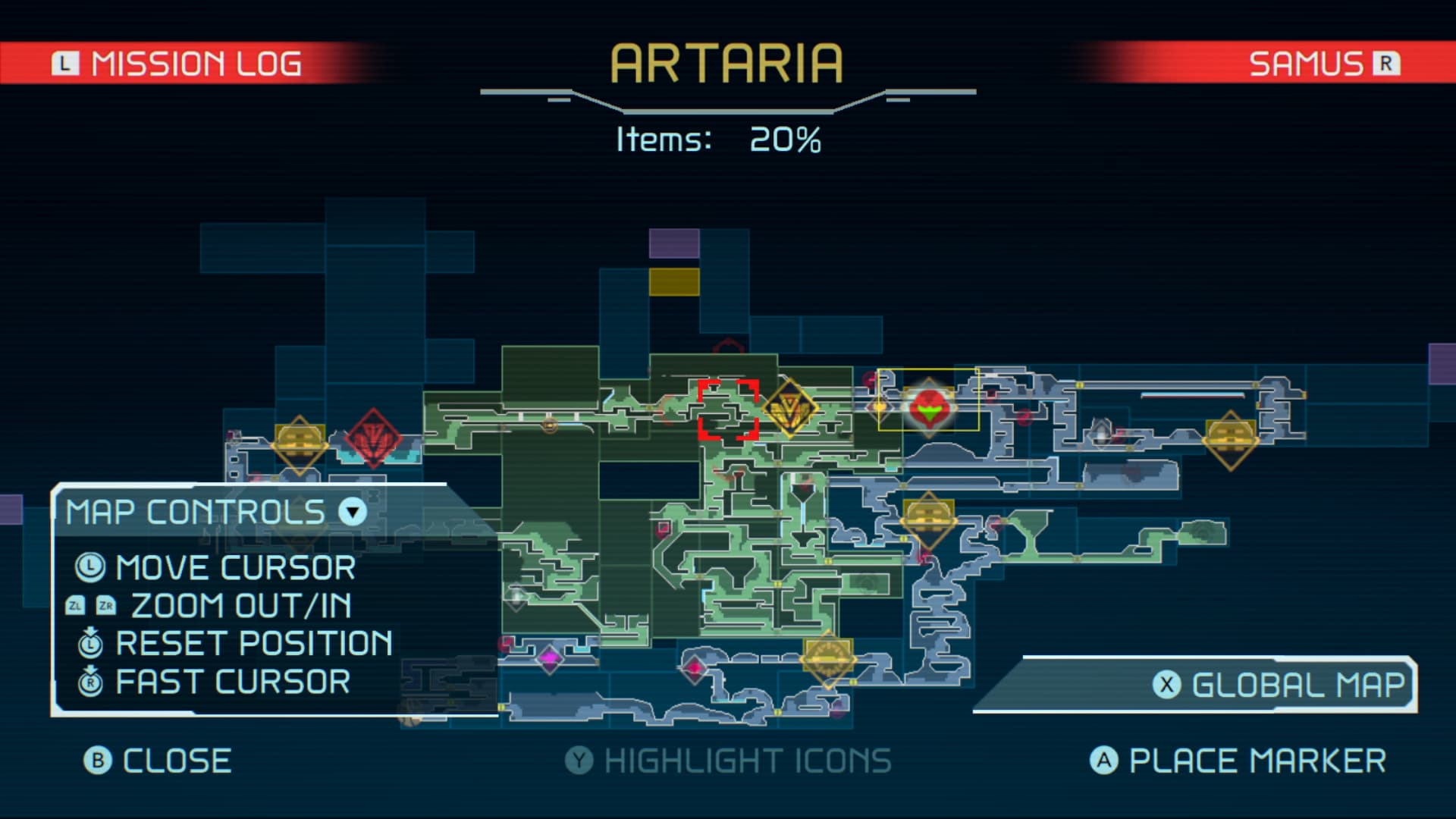 The map is very nice, though, informative without revealing too much, and a “something is around here” flash fills every journey with pit stops as you blast the landscape trying to find the secret passage to the missile tank. Being able to show all of a certain type of door or item is a very helpful time-saver as well for both completionists and those unsure of where to go next.

And here we have the water area

Feeling like you’re in a cohesive world is also nice, and something that Dread doesn’t really accomplish. The different areas you’ll visit are all certainly distinct, but they don’t really fit into one another at all. You get in a train or elevator and you’re in a whole new zone, with no overlaps or secret passages between them. In Super Metroid, for instance, you have the rocky surface with a secret base embedded in it, the wrecked ship crashed into a large ocean zone, all above the fiery core, and you travel through them logically. In Dread, you have the rocky area, the jungly area, the hot area, and so on, but they don’t feel connected.

While it may lack that exploratory je ne sais quoi, the areas themselves are beautiful and fun to get around, and you do repeatedly visit them unlocking whole new sections you had no idea existed. They also change over time as the plot and your abilities evolve, and these changes can feel both clever and overly limiting. 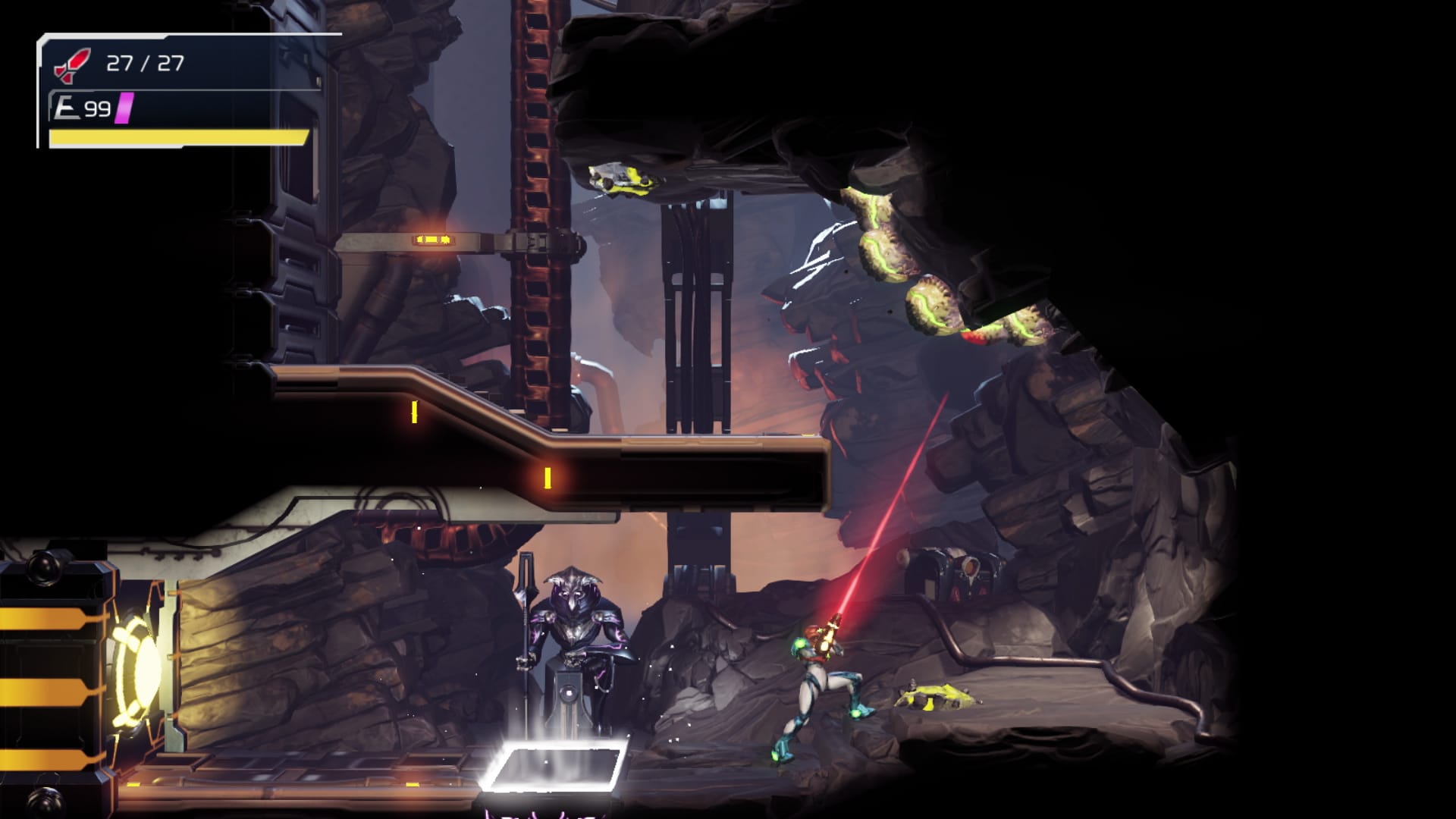 My journey in Dread lasted a little over eight hours, up to what I believe is the final boss encounter (which I have not yet beat — give me a break, it’s hard), and with a disappointing 54 percent item collection — though honestly it felt considerably longer than that despite rushing through it. And of course like all Metroid games, there is pleasure in playing it multiple times with accumulated expertise. If there’s a significantly different new game plus mode I haven’t heard about it, and from what I could tell there isn’t much opportunity to sequence break — a major hobby of Metroid fandom, meaning skipping a boss or ability to tackle areas in a different order. I’m probably wrong, though. (Update: I was, and efficient play has the world record down to under an hour and a half.)

Metroid: Dread is a Metroid game through and through, and while it may not have the sheer size of some of the games that have taken up its mantle in recent years, it makes up for it with its incredibly fluid gameplay systems and propulsive energy. I always wanted to continue playing and had to peel myself away every night, though I don’t think I’d have been able to take my time even had the review deadline not been approaching. This is a game that wants to be played, but also treats your time respectfully, with minimal padding and constant forward movement. It’s not an epic, but not every game needs to be in order to be worth your time and money.