If there’s a sector that has seen the biggest uptick in the number of startups and venture capital in emerging markets since the start of last year, it has to be the digitization of mom and pop stores.

Today, a new activity takes us to Morocco, where YC-backed company Chari just raised a $5 million seed round at a valuation of $70million.

Rocket Internet, Global Founders Capital and P1 Ventures co-led the round, which is the largest of its kind in Morocco at the moment.

Chari wants to digitize informal retail stores in Morocco and provide credit to them. Belkhayat, ex-strategy consultant at Boston Consulting Group, and Alj, an ex-strategy consultant from McKinsey, first got alerted to the shifts in Africa’s e-commerce landscape last year. On a mandatory trip from her former employer, Alj was tasked to understand how FMCGs operated in sub-Saharan Africa.

With Belkhayat tagging along, the couple discovered the pain points small shops faced in the region when they had to get their products. They never noticed such in Morocco before that, but it became evident after going back to the North African country that local mom and pop stores needed such service.

With companies like TradeDepot, MaxAB and Sokowatch bringing shops online in other African markets, the couple launched a similar platform in Morocco.

Chari operates as a mobile app allowing small retailers to order products from partnering FMCG multinationals and local manufacturers and get them in less than 24 hours.

In August, Chari received fresh competition when regional player MaxAB, who, after raising $55 million, moved into the country by acquiring another YC-backed company, WaystoCap, for an undisclosed sum.

But in an identical but seemingly unrelated move, Chari acquired Karny.ma, a Khatabook-esque application, the same month. The platform provides credit and bookkeeping services to about 40,000 merchants and now serves as Chari’s strategy to provide payment facilities.

According to CEO Belkhayat, the acquisition has enabled Chari to stand head to head with MaxAB in the country as it provides more merchants for the company to tap into. He adds that the company’s “great relationship” with the suppliers also gives Chari an edge in the still-nascent industry.

“We have exclusivity on some digital trades. For instance, P&G works with Chari exclusively. So in case any other player wants to sell P&G products, either they have to go through Chari or they have to buy the goods from the supermarket,” he added.

Chari holds distribution contracts with these FMCG companies and takes a percentage (10-30%) from every sale it makes to shop owners. The YC-backed company then employs suitable payment terms: it is not required to pay suppliers in 40 days but collects instant payments from local shops. With an average of 15 days of stock, this system allows Chari to be cash-flow positive.

“The more we grow, the more we have funding. The main reason why we raised this money is mainly to be on the radar of investors and grow outside Morocco,” said the CEO alluding to the fact that Chari is on the cusp of achieving profitability. 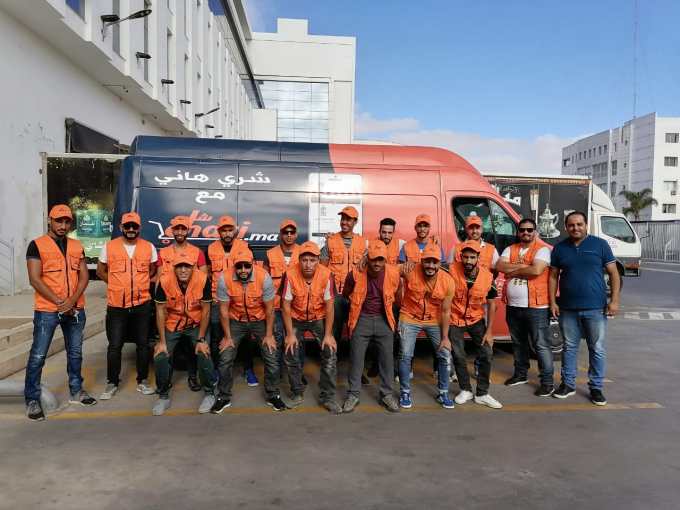 Unlike MaxAB, Chari doesn’t own assets; rather, it rents them. Asked if Chari will adopt an inventory-heavy model later, the CEO said it’s unlikely. There are many warehouses available in Morocco to rent, and doing so allows the company to scale faster, he said.

It’s the same process in Tunisia, its second market after Morocco. And on the logistics end, a total of 100 people work as delivery agents in both regions.

The Moroccan startup currently transacts about $2.5 million monthly, said Belkhayat. It has signed up 15,000 merchants and is growing 20% month-on-month, but just half of those use the platform regularly. When Karny is taken into account, the total number of merchants using Chari’s products extends to over 50,000.

What lies ahead for Chari following this seed round is moving into Francophone Africa; Cameroon, Ivory Coast, Mauritania and Senegal top that list. Also, the company will use the funding to get licences to offer other financial services like remittances, bill payments, mobile top-up and buy now, pay later in Tunisia and Morocco.

A subtle and impressive bit of this announcement is that Chari chose to disclose its valuation which private African startups rarely do. And for a startup from a North African country that isn’t Egypt to command such lofty valuation, it’s easy to see why investors are excited about its prospects regarding B2B e-commerce retail in the MENA region. Will it translate to more investments in Morocco and the Maghreb region? COO Alj hopes so.

“We are happy to lead the way of the nascent Moroccan startup ecosystem,” said COO Alj. We hope that this seed round will be one the first of a long series of noticeable seed funding in Moroccan startups.”