Anyone looking for a job, even in the past decade, knows how difficult it can be or has been — applications going into a black hole of a CRM, no response and follow-ups or the process being drug out for months.

Lydia Han and Christopher Triolo started ModernLoop in December 2020 after seeing the problem of technical recruiting firsthand. Han, who was a product manager at Slack, also worked at Brex the same time that her sister was a technical recruiter there and heard about the pain points. Meanwhile, Triolo came up with the idea for the “charitable donations” platform on Facebook. They saw recruitment as an industry that needed products and technology to work together to provide better user experiences.

“Once you get a candidate in the pipeline, you have to convince them to take the job,” CEO Han told TechCrunch. “This process is the first impression someone has of the company, so you have to move them along in the process, put them in front of the right interviewers and be prepared to deliver on the experience.”

Recruiters have traditionally kept track of the hiring process manually with spreadsheets, but ModernLoop automates many of the repetitive tasks while also scheduling and balancing the interviewing workload so that not only are the right people involved, but also a diverse mix of interviewers. 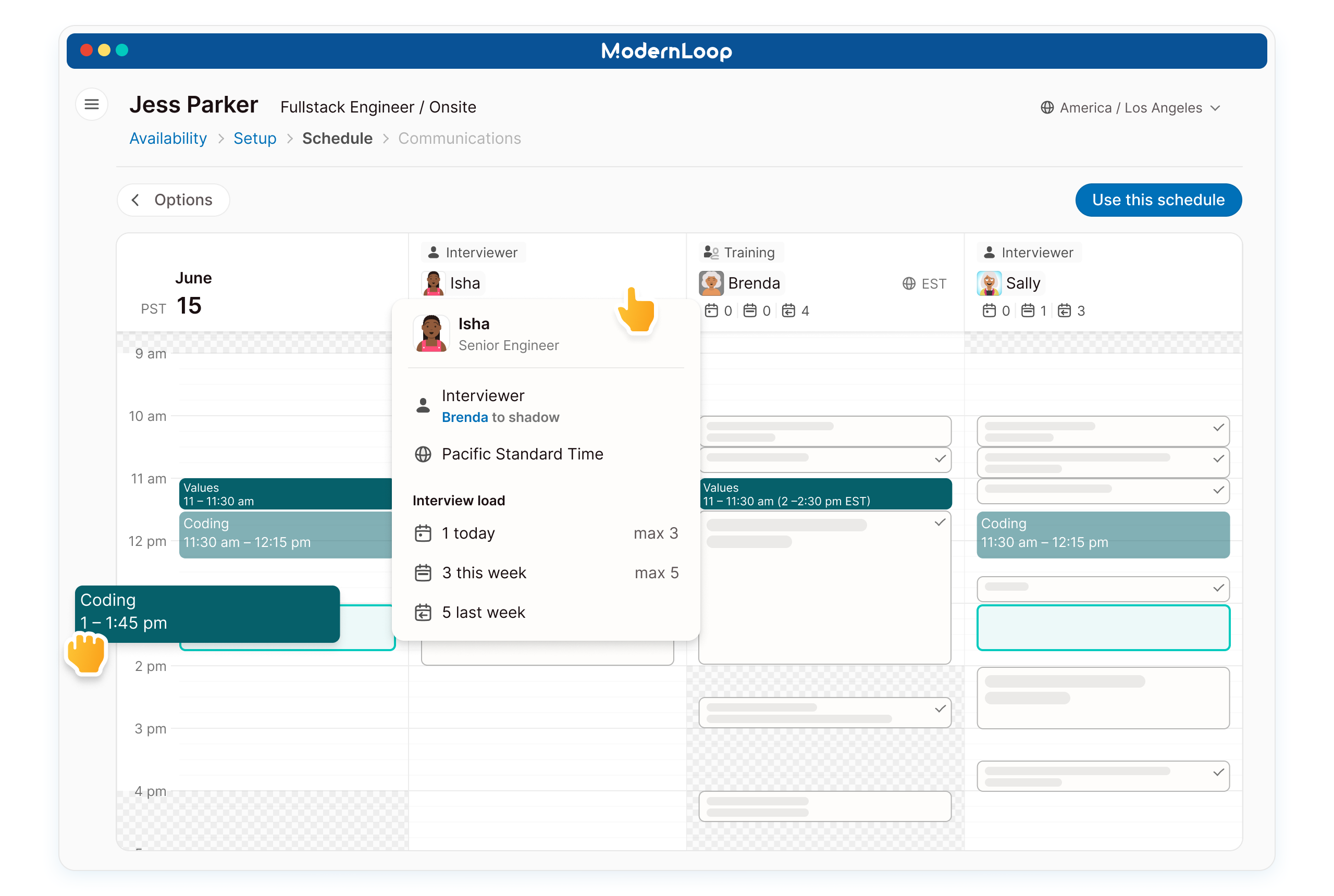 The platform also trains interviewers with a shadowing experience and facilitates communication and coordination via Slack so people on the company and candidate side have all of the information needed for the interview.

ModernLoop was part of the Y Combinator Winter 2021 cohort and announced it raised $3.3 million in funding, led by Accel, that included Webb Investment Network, some of Han’s former leaders at Brex and a Zoom product lead.

U.S. Department of Labor statistics estimate there is already a global talent labor shortage of 40 million workers, and that number will grow to over 85 million by 2030. The hiring sector is continuing to attract entrepreneurs who honed their skills in big tech and now want to solve this problem.

ModernLoop’s approach is one of the latest to receive investor attention. For example, in the past month, recruiting platform Gem raised $100 million to value the company at over $1 billion. Its co-founders are from Dropbox and Facebook. CodeSignal, specializing in technical assessment, brought in $50 million — one of its co-founders is from Google.

Amit Kumar, partner at Accel, also saw the hiring process up close when he was part of the hiring committee while at Twitter. Teams would interview candidates, aggregate the data and provide it to the people making the ultimate decisions.

He says recruiting operations is difficult enough, but the process became much more complicated during the global pandemic. ModernLoop has “real authenticity with the space, the scrappiness and an early response that was resounding.”

“I admired Lydia and encouraged her to start a company and pursue entrepreneurship,” he said. “No one has shown love to recruiting operations folks. I haven’t seen before the kind of early response she was getting with customers, and we were closing 80% of conversations with a bare-bones product.”

In fact, early on, Han reverse-emailed some of the recruiters who had reached out to her for positions to talk to them about the idea of ModernLoop and inquire if they would be interested in the product.

ModernLoop’s customer list now includes Benchling, Chainalysis, Ramp, Primer.ai and VSCO. In particular, since Chainalysis started working with ModernLoop in March, the company grew from 200 to over 300 employees, Han said.

Now that the company has a product and paying customers, the new funding will go toward building up a team of engineers and expanding the customer base.

“We ourselves were founded in the heart of the pandemic, and with companies going remote and staying remote, the interviewing experience also needs to be remote,” Han said. “Also, the better trained your interviewers are, the better your company will be.”

As the economy reopens, startups are uniquely positioned to recruit talent