Chile’s Buk, which has developed a human resources management platform for Latin American companies, announced today that it has raised $50 million in a Series A funding round that values the company at $417 million.

There are a few notable things about this financing. For one, it represents one of the largest (if not the) largest Series A rounds raised by a Latin American startup to date. Secondly, it makes Buk the third most valuable startup in Chile after Cornershop and NotCo.

Historically, Brazil and increasingly, as of late, Mexico, have received the bulk of funding from venture investors. But more and more, other regions in Latin America such as Chile are also attracting global investor interest.

Also of note is that Buk was bootstrapped for the first five years of its SaaS operations. Its first institutional investors include San Francisco-based Greenoaks, which led the Series A round, and SoftBank. Interestingly, a group of founders from unicorns such as Rappi, Kavak, Konfio, GBM, Ualá and Brex also put money in the round.

Founded in 2017 by Chileans Jaime Arrieta, Santiago Lira, Teresita Morán, Felipe Sateler and Ricardo Sateler, Buk is building a cloud-based platform that it says allows companies to manage their human resources “end to end” — from the payment of salaries to professional development. Buk also includes tools like  company climate surveys, performance evaluations, recruitment modules and attendance monitoring with the mission to “build a happier workplace”.

Buk CEO Jaime Arrieta said the company has been growing organically, and has historically been financing its growth with revenues from its sales. While Arrieta declined to reveal hard revenue figures, he told TechCrunch that Buk saw its annual recurring revenue (ARR) increase by 151% in September compared to September of 2020.

“We have been able to double our size year over year [without institutional funding],” he said. “However, our excellent results, differentiated offering, and the comprehensiveness of our product, which distinguishes us from competitors, attracted funds like Greenoaks and SoftBank, who wanted to invest in Buk to boost our growth.”

Today, Buk has more than 4,000 clients that hail from a variety of industries in Latin America, including educational institutions, investment banks, fast food chains, law firms and others. It powers payroll for over 400,000 employees of Buk customers every month.

Buk’s infrastructure is hosted on AWS servers, which means it is able to access multiple tools across its technological ecosystem.

The company says it performs daily backups of its customers’ information, allowing it to keep the service running even in the event of third-party data failures. Buk says it also offers a “friendly” programming language that has many facilities “to quickly develop functionalities.”

Buk also has a social good component. As the COVID-19 pandemic raged last year, the company launched Buk Starter, a free digital remuneration tool for companies with up to 20 employees. Today, the tool is used by 4,000 SMEs.

The company plans to use its new capital primarily to accelerate its growth in Mexico, consolidate the market in Colombia and Peru (where it expanded in 2019 and 2020), double down on technology and product development and toward the acquisition of new companies at the regional level. Buk recently acquired CTRL, an assistance company in Chile. 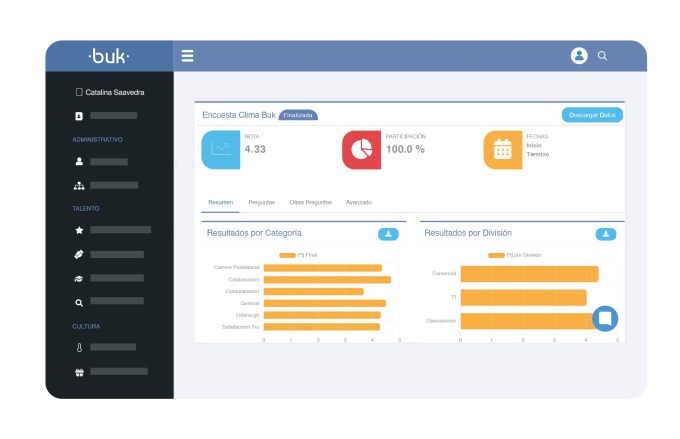 Over the next several years, the company also aims to increase its market share in each of the countries where it operates. In September alone, Buk says it grew 7% in Chile, 20% in Colombia and 23% in Peru month-over-month.

Buk has more than 300 employees, and says that 50% of the company’s workforce are women.

“HR software is the core source of truth for a company’s employee data, underpinning critical functions like payroll, benefits, and people management,” said Neil Mehta, founder and partner at Greenoaks, in a written statement. “But until now, businesses in Latin America have relied  primarily on homegrown solutions that don’t scale or imported software that’s poorly tailored to local needs. Buk is building an HRIS suite made in and for Latin America, enabling more efficient workflows throughout the full employee lifecycle, from recruiting to off-boarding. We think the company is poised to build the region’s #1 HR technology platform.”