Taking a small detour today from traditional Exchange topics — we’ll get to some IPO news later on — to talk briefly about climate, climate tech and pessimism.

Last week on the podcast, the Equity crew spent a bit of time digging into the planetwide impacts that our warming world will endure in the coming years — and the role that startups can play in combating climate change. There are some encouraging companies in the mix, including DroneSeed, which we all rather liked.

Read it every morning on Extra Crunch or get The Exchange newsletter every Saturday.

Then again, who doesn’t like the idea of shooting seed pucks from drones to reseed forests? If you have ever taken part in a tree-planting day, using a drone instead of your hands sounds like a superbrilliant idea. I have done the work by hand and can’t really recommend it.

TechCrunch’s own Kirsten Korosec wrote a long and rather good dig into the climate tech space, which I recommend reading if you want to get a bit deeper on the subject.

All this is to say: Some startups are working on building companies that can profit while helping combat the rising tides, more frequent fires and more powerful storms that appear set to come our way in the coming decades. Which is to say that kids are going to have a tougher go of life than what you or I have enjoyed. Especially if you are older than I am.

It was in that particular mindset that I ran across a bit of commentary from former Y Combinator boss Sam Altman over the weekend that dug into the climate change issue from the lens of conversations with some younger folks.

Here’s the set of tweets: 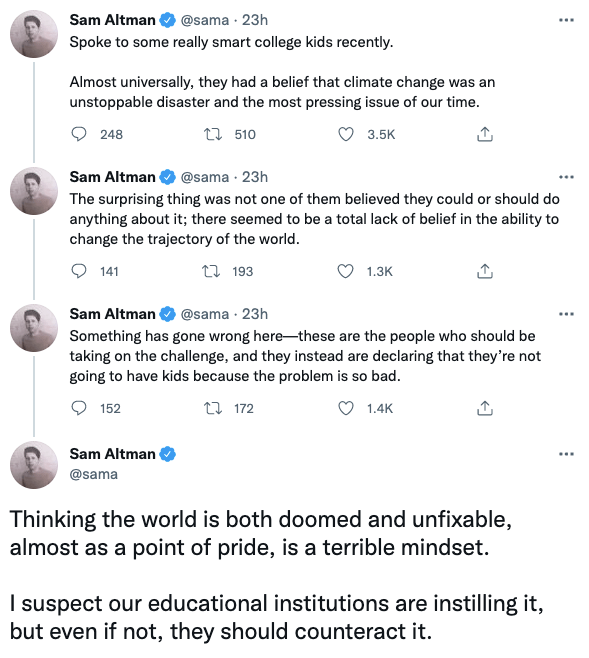 There are a few threads in there worth tugging, but we’re focusing our attention on the youth-pessimism element for now.