A pair of new e-readers from Kobo iterate on the company’s high-end options, adding Bluetooth audiobook and stylus support to the now familiar asymmetrical design of its larger devices. The Sage and Libra 2 also gain a new charging cover so you only have to plug the device in every few months rather than every few weeks.

The Sage is the higher-end of the two models, being an evolution of the Forma, which I reviewed here. The excellent 8″, 300 PPI screen and color-adjustable screen light are getting an upgrade to the new Carta 1200 type display, so rest assured the reading experience will continue to be great. Likewise the Libra 2 is the sequel to the Libra H2O (they’re dropping the H2O, but it’s still waterproof), with the same type of display and light at 7″ instead. (If you want smaller, the Clara is still the best move.)

The new screen promises to be better but not a revolution — same resolution, same temperature adjustment and so on, but it should be faster to refresh and offer slightly better contrast. I’ll do an apples-to-apples comparison to make sure.

New in both the readers is Bluetooth audio that can be used exclusively for sending Kobo audiobooks to your wireless headset of choice. While it’s always nice to have new capabilities, it’s a little surprising that Kobo decided to limit this to its own service. The company has generally been very open to different formats and services, letting you load whatever document formats you want on its readers — so it’s surprising that the approach here is more restricted. It’s possible that tie-ins with other services (like the devices’ solid Pocket integration) are simply forthcoming. Both readers come with 32 gigs of storage built in to accommodate this new space-hogging feature. 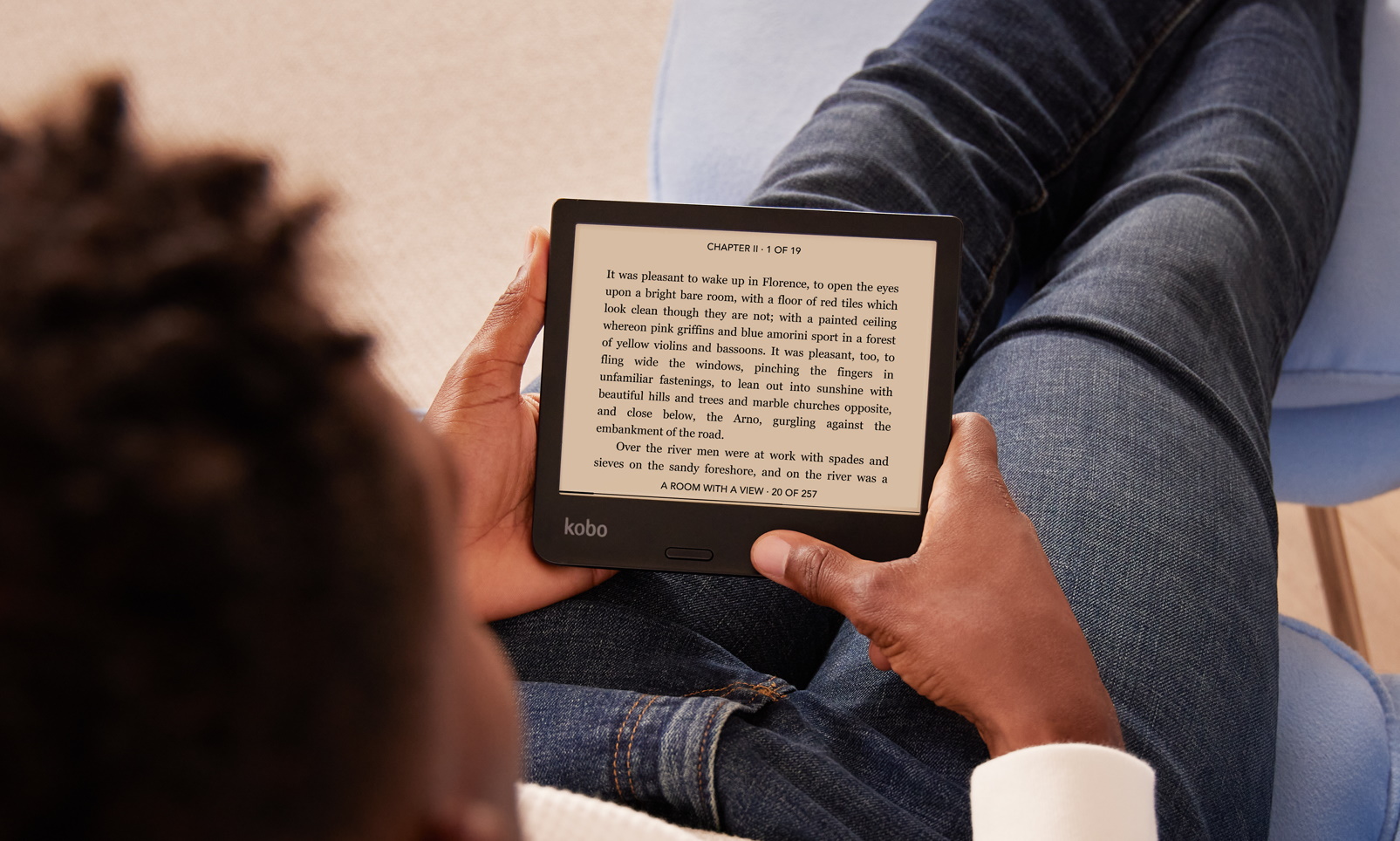 Only the Sage gets support for Kobo’s new stylus, however, which was first put to use on the new, large-type Ellipsa. It was useful there but mainly due to the larger format allowing the necessary space for sketching and jotting down notes. Whether that utility makes the jump to the smaller (but still on the large side for an e-reader) Sage is tough to predict — but we should be able to evaluate that when we review it.

The form factor of the devices has, unfortunately, gained somewhat in size and weight. The Forma and Libra H2O were notable for what you might call their “side chin,” a wedge-shaped bezel you could use to hold and operate the e-reader one-handed. Although as a rule I prefer symmetrical things, the form factor (pioneered, it must be said, by Amazon with the Oasis) has grown on me, partly because the screen part of the device is so thin that it feels rather futuristic and of course takes up very little space.

Side view of the Sage (top) and Forma (bottom). Truly the differences seem smaller than I made them out to be. Image Credits: Kobo

The new Sage and Libra 2 are definitely chunkier, with no extra-thin screen part, instead being as thick as thickest section all the way through. It’s a clean design in some ways and for all I know it may even be more comfortable to hold, but it’s already tough enough to find a pocket the Forma fits in. And it doesn’t help that both are about 20% heavier. While technically that only amounts to a few dozen grams and 3 or 4 millimeters, part of the draw of e-readers to begin with is that they are thin and light.

Anyway it might not matter once you put a case on these things — there’s a new evolution of the SleepCover, which automatically turns the device on or off when you open it, in the PowerCover, which also charges the device it protects. Of course that’ll probably add another few hundred grams too.

Though I grouse about these small changes to design and dimensions, the screen and front light are still class-leading and Kobo’s software is great and straightforward for reading. We’ll see how these new devices stack up to the old ones as soon as we have the chance to review them.

The Kobo Sage will cost $260, and the Libra 2 will cost $180 when they ship on October 19. You can preorder them now if you’re feeling lucky.