On Interstate 45 in Texas, a billboard with “Aurora” emblazoned at the top in giant white letters offers a cryptic message: “A new way to drive is on the horizon.”

It’s hard to know just how many of the thousands of drivers on this stretch of road know what that means or what Aurora is; the autonomous vehicle technology company is hardly a household name even as it (along with several competitors) aims to forever change how people and packages get from Point A to Point B.

But Aurora, which plans to join the public markets via a merger with a blank-check company, placed the spotlight on its products this week, inviting reporters, analysts, and partners like PACCAR, Toyota and Volvo, as well as existing and potential new investors to ride in its autonomous trucks and get a closer view of its tech. It also shared an update on its operations, including that it is beginning to map and test a new route in Texas.

The so-called “Aurora Illuminated” event was held at an auspicious time for the company. Aurora, which was founded in 2017 by Sterling Anderson, Drew Bagnell and Chris Urmson, has more than doubled in size to more than 1,600 employees in less than a year through its acquisition of Uber’s self-driving unit.

It is now on the precipice of becoming a publicly traded company with an implied valuation of $13 billion through a merger with special purpose acquisition company Reinvent Technology Partners Y. That deal, which was announced in July and confirmed TechCrunch’s earlier reporting, is expected to go to a shareholder vote this year. If approved, Aurora will make its public debut on the Nasdaq shortly after. The company has not disclosed either of these dates.

To say that Aurora has officially “made it” would be presumptive and premature. But the company has navigated a number of hurdles — notably raising considerable capital, securing key partnerships and ramping up testing — that puts it on the path toward commercialization. And it has made material progress in the competitive autonomous trucking landscape where other well-funded and partnered companies — such as Waymo and publicly traded TuSimple and smaller startups like Gatik and Kodiak Robotics — are playing.

Aurora first landed in Texas a year ago. Today, it’s using its autonomous trucks (always with two safety drivers) to carry loads for Barcel, the Takis spicy chips and snacks manufacturer, along a route in Texas between its Dallas, Palmer and Houston terminals. The company also began to carry freight for FedEx between Dallas and Houston as part of a pilot program announced earlier this month. Paccar trucks that are equipped with Aurora’s technology will be used multiple times a week to complete the nearly 500-mile route along Interstate 45, according to FedEx.

The plan is to add more terminals in El Paso and San Antonio, then stretch west to Phoenix and Los Angeles, south to Laredo and east to New Orleans. The network that Aurora envisions will encompass the Western and Eastern seaboards and eventually the entire country.

Aurora has not shared when it expects to move beyond Texas. It just started testing — without freight — the 630-mile route between El Paso and Dallas.

On the routes where it is hauling goods, the company has always delivered within the allotted time frame, according to co-founder and chief product officer Sterling Anderson.

“That’s awesome and an exciting example of operational excellence,” co-founder and CEO Chris Urmson said in an interview at the event. “Over the longer term, because we won’t have the hours-of-service limitations when we’re able to operate our vehicles without drivers on board — that when there is a dramatic leap forward.”

The ride, which TechCrunch took twice, began in the parking lot of its South Dallas Terminal in Palmer, Texas.

The truck is a Peterbilt 579 integrated with Aurora’s autonomous vehicle system and customized in partnership with Paccar. The system, which the company has dubbed the “Aurora Driver,” includes cameras, radar and a combination of long- and medium-range light detection and ranging radar sensors referred to as lidar.  The long-range lidar was developed in-house after its acquisition of Blackmore. (Aurora has since acquired a second lidar company, OURS Technology. The medium-range lidar sensors are from an undisclosed supplier.

A massive computer with cooling units sits in the rear of the cabin. Other displays, including one that shows the vehicle in motion, its intended path and image classifications made along the way, are also in the cabin. Two safety operators are in the vehicle. The so-called pilot holds a commercial truck driver’s license, or CDL, and the co-pilot is there watching and calling out the intended path as well as acting as a spotter for other vehicles, pedestrians or objects in the road. 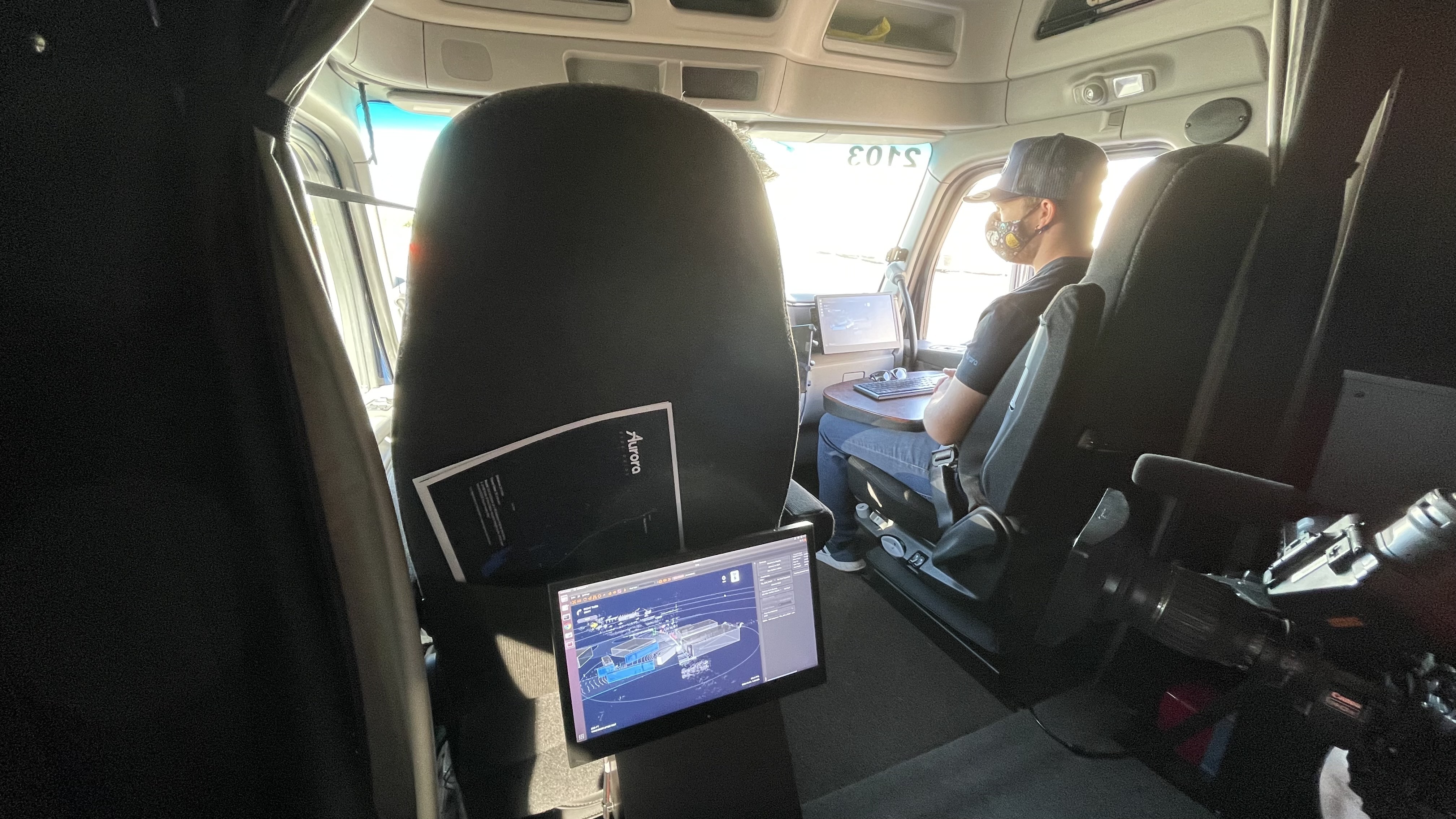 “We don’t just see them as testers; they give us a ton of really good guidance and advice not just in the technology and how they’re feeling it, but also the rules of the road” Lia Theodosiou-Pisanelli, Aurora’s VP of partners and programs, said during a safety briefing prior to entering the truck. “For example, a truck driver wouldn’t do that, you take a wide turn, this is how you do it, this is how you operate, this is what other drivers are going to expect. They also have a really good understanding of customer expectations.”

All operators, which are employees of Aurora and not contract workers, go through weeks of training on vehicle controls, defensive driving and putting them through scenarios on a closed track. Twelve “pilots” have gone through the training, which takes between six and eight weeks, and are in trucks today. Others are in the pipeline.

Both test rides began with the truck driving autonomously from the terminal lot to a frontage road, where it then took an on-ramp onto Interstate 45. The truck traveled along 45 about 13 miles before exiting, turning left to travel under the freeway. After a stop sign, the truck took one more left to enter the interstate once more and head back to the terminal. The round trip was about 28 miles.

While it’s difficult to provide a thorough assessment of AV tech in these kinds of demonstrations, it does provide a snapshot of the system and, importantly, what kind of “driver” a company is trying to develop.

In Aurora’s case, the company is taking a cautious approach. The truck will not exceed 65 miles per hour on the highway, even when the posted speed limit is 75 mph. The truck also stays in the far right lane except to provide space for a merging vehicle or to overtake slower ones. It also always moves to the other lane if a vehicle is stopped on the shoulder, per state law.

Aurora has also directed its safety operators to “disengage,” meaning to take over manual control, in active construction zones where workers are present, instances when emergency vehicles approach with lights activated, and amid any “crazy actors,” as Theodosiou-Pisanelli describes it.

“Anytime we have a disengagement, it’s an experience we learn from,” she said. “We tell them to be proactive about disengaging; it doesn’t impact our ability to learn from that experience because we can put it through the simulator and see what the system would have done.”

The company says it has already driven more than 4.5 million on-road miles, as well as billions of miles in its virtual testing suite.

During my ride, the safety operator took control once on a section along the frontage road as a pickup truck sitting in a driveway inched forward and appeared to be about to turn in front of the semi. For the remainder of the two rides, the truck did operate autonomously and smoothly, with one slightly more aggressive braking event when a slower vehicle moved in front of it.

Underneath a temporary structure outfitted with slick lighting, carpet, seating and decor reminiscent of a Tesla reveal event, the company laid out its strategy and showed off prototypes and educational explainers of its technology, including its lidar and simulation. The aim was to indicate what is behind its plan to deploy an autonomous trucking business by late 2023 and ride-hailing in late 2024.

The company displayed two different vehicle prototypes that it says will ultimately deliver vehicles that move goods and people autonomously through the world. They showed the Volvo VNL truck, a design prototype of Volvo’s first autonomous truck, intended for commercial production. On-road testing of the VNL will begin in 2022.

Aurora also displayed its AV-ready Toyota Sienna prototype that is intended for mass production. Aurora is integrating its AV system into the vehicle and will have a testing fleet of about a dozen vehicles out for testing and validation in Pittsburgh, the San Francisco Bay Area and Texas, the company said.

Aurora was not ready to talk about future partners. But strategically speaking, Anderson noted that the market is huge, that “there are a lot of players, and we’re talking to many of them.”

The pair did weigh in on teleassistance technology, which is when humans in an off-site location monitor and then can send path planning instructions to the autonomous vehicle if needed, that they haven’t discussed in detail before.

“From day one, we’ve thought teleassist would be part of the technology,” Urmson said.

“We’ve modeled at a pretty fine granularity what happens in and around terminals,” Anderson said of its progress to date, noting that it has every step charted out. “So we have a pretty strong understanding of what the end-to-end support requirement is. What we don’t have quite yet is how frequently we’re going to require a teleassistance event or roadside assistance when we don’t have a driver in the truck.”

Urmson and Anderson confirmed that the company is testing a teleassist technology on a closed track and public roads and will be working with its partners to determine the best approach for commercial operations.