DroneSeed started as a tech-powered alternative to the backbreaking work of large-scale tree planting, but this important task is only one small part of forest restoration, the infrastructure for which is being pushed to the breaking point by wildfires. Armed with $36 million in new funding, the company is reimagining reforestation from root to crown in a modern and vertically integrated way, grafting carbon futures and AI to century-old machinery and logistics.

When I first wrote about DroneSeed, the company had just made its debut, showing off its custom-built drones and systems for accelerating reforestation efforts. All the problems and solutions discussed in that article are ongoing — though the company is expanding, it isn’t by any means changing its core product, which is (as you might guess from the name) using drones to deliver seeds to forests damaged by wildfires. 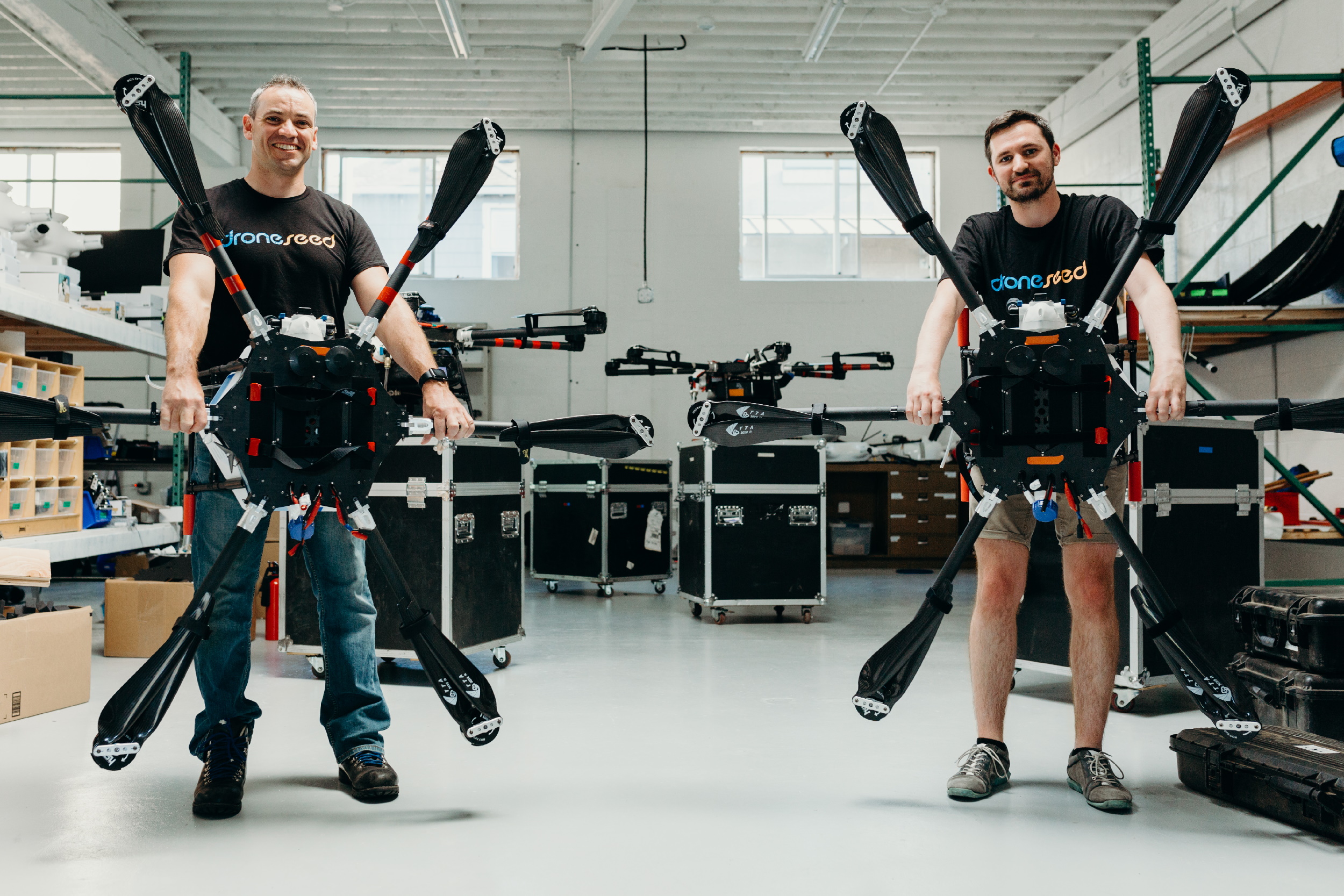 Briefly stated, DroneSeed replaces human tree planters, who do an invaluable job and do it well, but are increasingly scarce due to the difficulty and low pay of the work, and meanwhile the scale of devastation from fires long ago passed beyond the capabilities of manual labor. Instead of people, the company employs automated drones equipped with specially engineered seed packets and dispensers; they fly low over the landscape, identifying the best places for seed packets — not too rocky, a shallow slope and many such variables — and fires them off. Drones can deliver dozens of seed packets or, with a more offensive loadout, spray invasive plants that inevitably appear in the wake of fires before trees can take root.

This approach has countless advantages: It replaces undesirable and dangerous jobs of both planters and brush pilots, whose low-altitude helicopter work is unbelievably perilous; the engineered seed packets resist predators like enterprising squirrels; a truck with a fleet of drones can mobilize faster (in a month versus as much as years) and cover far more ground (about 6x) than human operations; the data-heavy process is easily audited and tracked.

That night, a forest flew

Back then the team was still working on early pilot projects, but now the model has been proven in some large scale deployments. Not only that, but the methods have been supercharged by improvements on the tech, research and regulatory sides. Improved data handling, a larger magazine for seed “pucks,” and FAA approvals for drone swarms and flying beyond line of sight mean the same number of drones can do far more work, faster and better than when they first took to the sky.

But what co-founders Grant Canary and Ben Reilly and their growing crew — now over 60 people, up from a dozen or so when I last talked with them — have found is that no matter how effective they make drone-based planting, it’s only one step in a multiyear process that involves numerous industries, all of which have been stretched to the limit by the continually growing and intensifying wildfires.

The square mileage burnt by fires has doubled in the last 20 years, and the fires themselves are stronger, well beyond the healthy, naturally occurring fires of the past that clear out brush and dead wood and activate a forest’s naturally occurring recovery mechanisms. The ones raging today cover far more ground and leave nothing behind but ash and charcoal. “At some point you run out of nature,” said DroneSeed’s Matthew Aghai, who’s heading up the growing side of things.

Where the heroic work of firefighters ends, the years-long follow-ups by forestry authorities and the private planting industry begins, but now their efforts are being held back by an unexpected obstacle: a tree shortage. 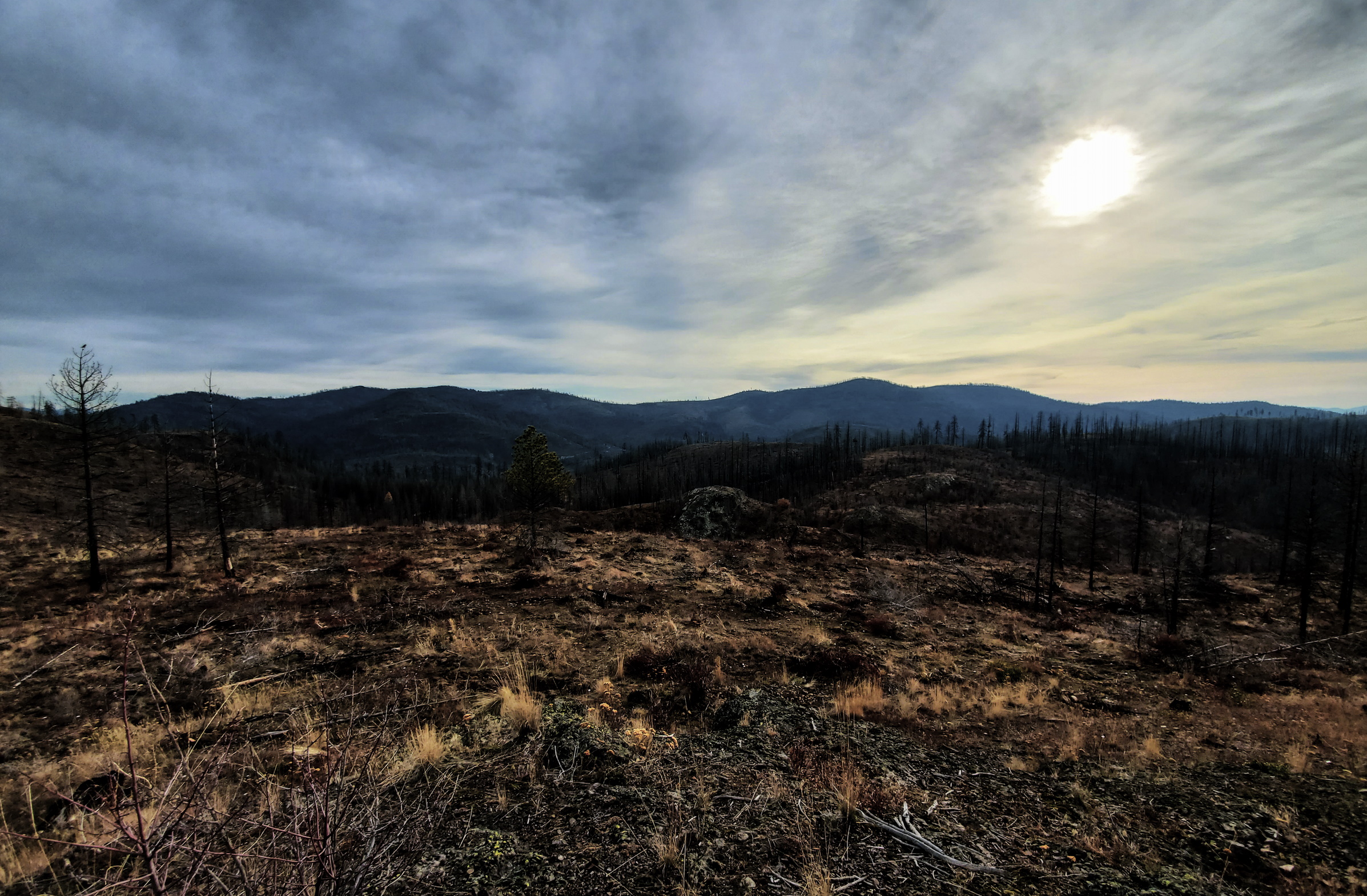 Seed banks and nurseries, both publicly and privately held, have been unable to keep up with demand for years now. Due to market prices (and perhaps manipulation and neglect) beyond the scope of this article, we simply don’t have the millions of seedlings necessary to replant the innumerable acres being scoured on a yearly basis.

Having studied the public-private relationships and markets, DroneSeed determined that it’s true after all: if you want a job done right, sometimes you have to do it yourself. So they bought Silvaseed, a seed and tree supplier that’s been in business in the pacific northwest for around 150 years.

Silvaseed has been successful all that time, supplying customers all over the world going back a century but has remained a modest operation due to the limited capital in the sector. After all, until quite recently there hasn’t been a run on seedlings that suggested the companies growing them could profitably double or triple their operations.

The company’s seed sorting facility is filled with state of the art machinery … from the middle of the 20th century. But DroneSeed’s team was amazed by it nonetheless: an industrial-scale seed sorting and storage facility just waiting to be disassembled, cleaned and oiled, then put back together with some 21st century improvements. They’ve committed to keeping on and in fact expanding the Silvaseed team as well, so it’s not the end of the line for them over there. Anyway, who but the original crew would know the ins and outs of the machinery, and the ancient and comprehensive card catalog tracking decades of purchases? 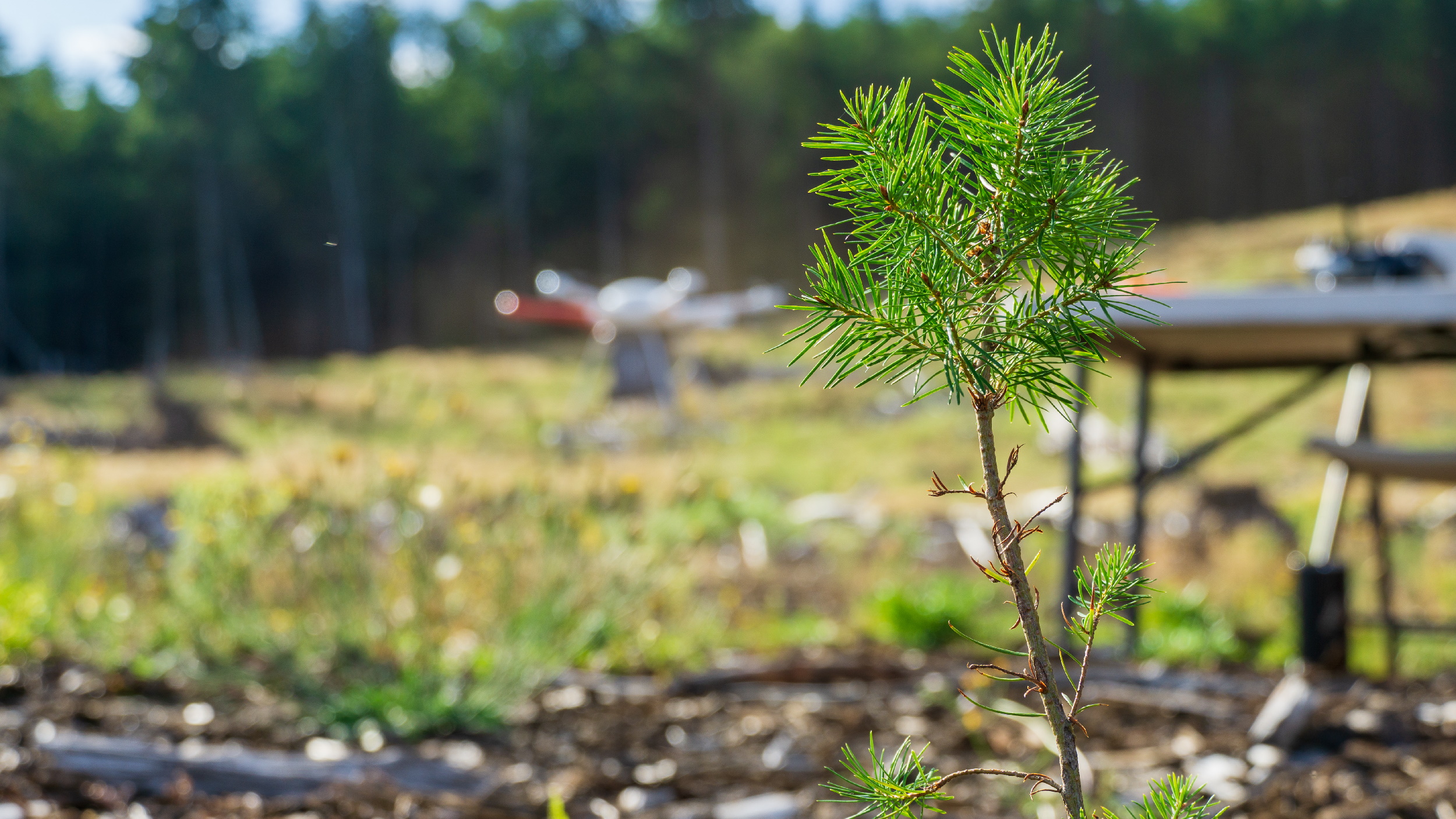 More importantly, however, this is a step for DroneSeed toward becoming not just a planting provider, but the only one-stop shop for wildfire reforestation efforts in the country — perhaps the world, at the scale they are working toward. Today, if you’re an owner or administrator of a large forest and a wildfire rages through destroying 5,000 acres of it, you’re looking at months, perhaps a year or two of calls and paperwork with state agencies, insurance companies, seed providers, planters and half a dozen others. DroneSeed aims to make it a single call, and if all goes well there will be seeds (ensconced in nutrient-filled, squirrel-resistant pucks) on the ground within a handful of months.

“A recent study came out stating that nationally we need to 6x seed collection and 2x nursery space to truly leverage reforestation to mitigate the worst effects of climate change,” said Canary. “We’re doing that work. We’ve expanded Silvaseed to be the largest private seed bank on the west coast. We also grow millions of seedlings each year and are doubling capacity.”

Of course, there are no trees if there’s no money. And the existing pipeline for paying for reforestation is as slow and cumbersome as any decades-old public-private partnership you’d care to name, except with the added difficulty that the work itself takes place in remote and wild areas only recently ablaze. Think getting your street resurfaced is a pain? Try replanting 10,000 acres of wilderness with methods pioneered a century ago. 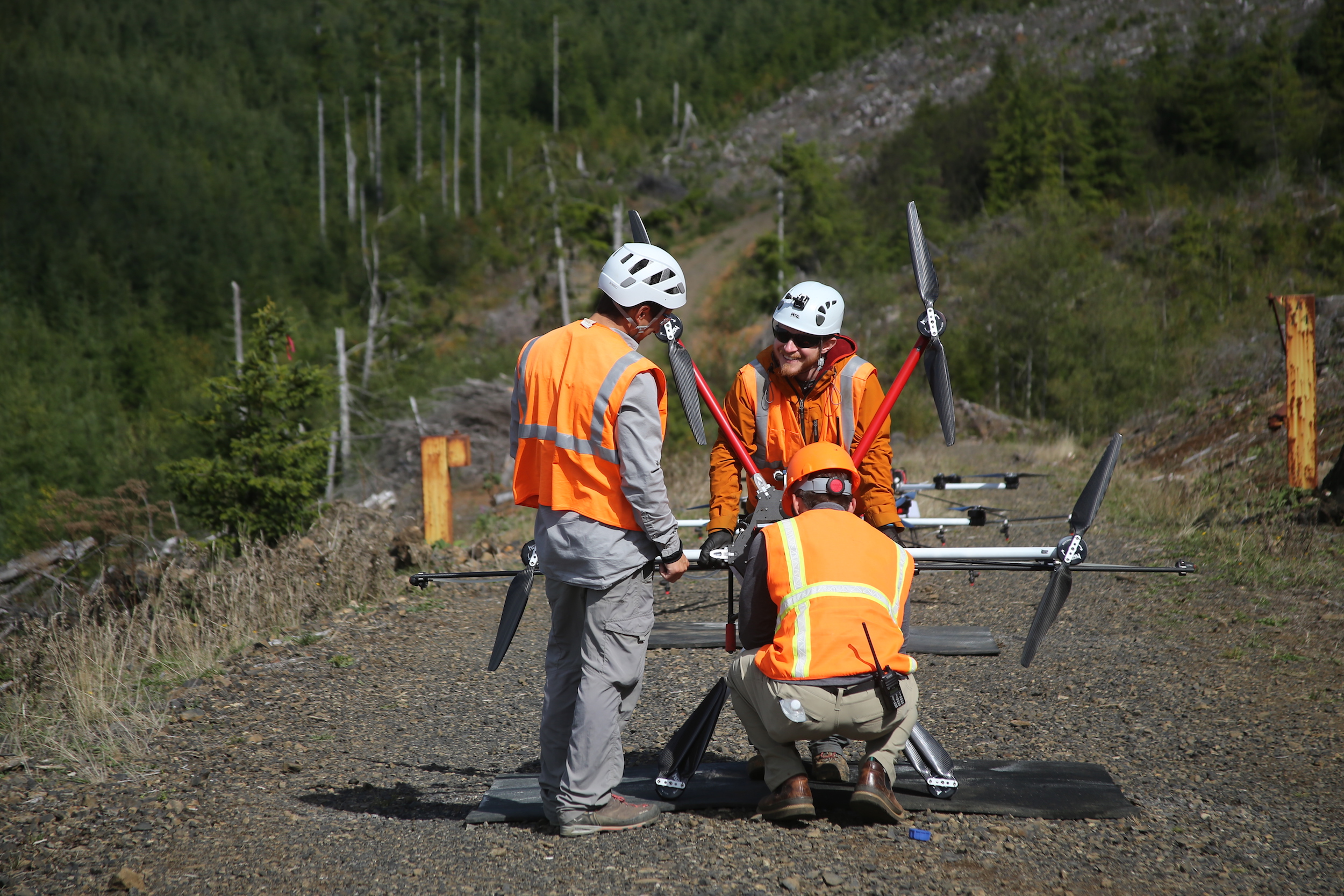 Landowners whose forests have burned down have, in the past, relied on state funds and insurance money to replant, in the hopes that those forests, once they regrew in 15 or 20 years, would realize their assessed value. Many have opted not to restore the forests at all, instead completing the job the fire started by clear-cutting the remainder and converting it to pasture.

In recent years carbon credits have appeared as a new funding source for these projects: Seeking to offset emissions but unwilling or unable to change their own processes, companies will pay to have trees planted. The problem is these credits are very, very limited in volume and also take years or decades to mature. Companies compete over buying them, driving the price up per ton of carbon sequestered.

The biggest, richest companies in the world are dying to show how eco-conscious they are and would spend 10 times or more what they do today on carbon reduction projects, if they only had something to spend it on.

The financial innovation that DroneSeed feels confident will support its work — and empty the bursting coffers of industries straining to appear ethical — is carbon futures, or “ex ante” credits. Think “I’ll gladly grow you a forest tomorrow for funding today,” but with a lot of independent oversight.

Organizations such as Climate Action Reserve have pioneered and promulgated a standard approach. An ex ante credit pays for efforts to begin reforestation now, with no need to wait for growth or confirmation. The trees are planted, and the land then put under a long-term easement to legally ensure it isn’t just going to be logged. An independent forestry team inspects the land after a year or two, confirming the number and health of the planted trees. And DroneSeed improves this process by a number of means, primarily collecting and tracking an enormous amount of data literally from the moment they pick up a seed — its location, type, elevation and other attributes are noted — to when and where it’s planted, down to the minute and meter, and later, that data can be used to more easily gauge growth and planting success.

I had trouble at first understanding the money movement here — financial instruments aren’t my strong point, least of all one so abstract. But there really are billions of dollars waiting to be spent on reforestation that are being held back because there’s no structured way to do so. Sure, Apple could give $50 million to a nursery or forestry concern, but it would just be plain old philanthropy, and there’s little oversight to make sure that $50 million goes to good use. When someone comes to them and says, what exactly did that money accomplish, they can only pass the buck.

While for compliance and regulatory purposes official carbon credits are still the only option, ex ante credits aim to be sort of like a LEED or UL standard: though privately defined and verified, still crucial and even necessary part of the industries they enable. Projects certified with, for instance, CAR’s Climate Forward plan, meet guarantees of growth and oversight, so that when that $50 million gets spent, it’s as sure gone toward that amount of carbon reduction as that a LEED-certified building has certain levels of energy efficiency.

In this way companies can get something a little more tangible out of their greenwashing budget. Being able to say, and prove, that your company covered the reforestation of however many thousands of acres, and in the process removed the equivalent of however many millions of tons of carbon, is a valuable proposition. And the people doing the actual seed collection, sorting, growing, planting, checking and everything else desperately need the means to do so at greater scale or the rate of destruction will overtake the rate of restoration — a tipping point no one would like to encounter.

Meanwhile landowners can take land destroyed by fires and turn it from liability to asset by, essentially, letting an ex ante credit buyer help finance the restoration and agreeing to leave the resulting trees in place for 20, 50 or 100 years. Between that, the insurance and grants, they should come out ahead instead of having to give up the land for lost.

The $36 million A round making all this possible for DroneSeed was led by Social Capital and Seven Seven Six, with participation from many others. DBL Partners (early investors in Tesla and SpaceX) was one of the big ones, along with Shopify CEO Tobi Lütke, Resilience Reserve, Marc Benioff’s TIME Ventures, Spero Ventures and Marc Tarpenning. Then there’s Gaingels with Flight.vc, HBS Lady Angels, Julia Lipton’s Awesome People Ventures and the Coalition angels including Ashley Mayer. A lot of people seem to think this is a good idea.

“Trees aren’t a silver bullet for climate change, but we can buy time,” said Aghai, a veteran of the forestry services. But like efforts in solar, vehicle electrification and other climate-focused actions, reforestation requires an immense up-front investment to make up for lost time.