iRobot’s CEO once told me, with a wink, that he didn’t become a truly successful roboticist until he became a vacuum salesman. It’s a good line, and one that betrays some fundamental truths about the industry. Robots are hard, and in a lot of ways home robots are doubly so.

That no one has managed to crack the code beyond the wild success of robotic vacuums like the Roomba is not for lack of trying. To date, it’s largely been the realm of startups like Anki and Jibo (or the rare exception of the Bosch-created Kuri), but today, Amazon announced that it’s throwing its own tremendous resources behind the problem.

In fact, it’s doing more than that. The company just announced its first robot, Astro. The product is taking its first baby steps to market as part of Amazon’s Day One Edition program. Previously Amazon has used the platform in a manner akin to Kickstarter or Indiegogo, where customers effectively vote with their preorders. The new robot, which shares a name with the Jetsons dog, a track on the White Stripes debut and major league baseball team in Houston, will be available on a limited basis later this year. Astro is, far and away, the most ambitious device to be launched with the program, which has thus far included things like a receipt printer and smart Cuckoo clock. It’s also the most expensive, with a price tag of $999.

The price, however, is set to go up quickly. Per Amazon’s press materials,

Astro will cost $1,449.99, but as part of the Day 1 Editions program, it will be available for an introductory price of $999.99 and include a free six-month trial of Ring Protect Pro. 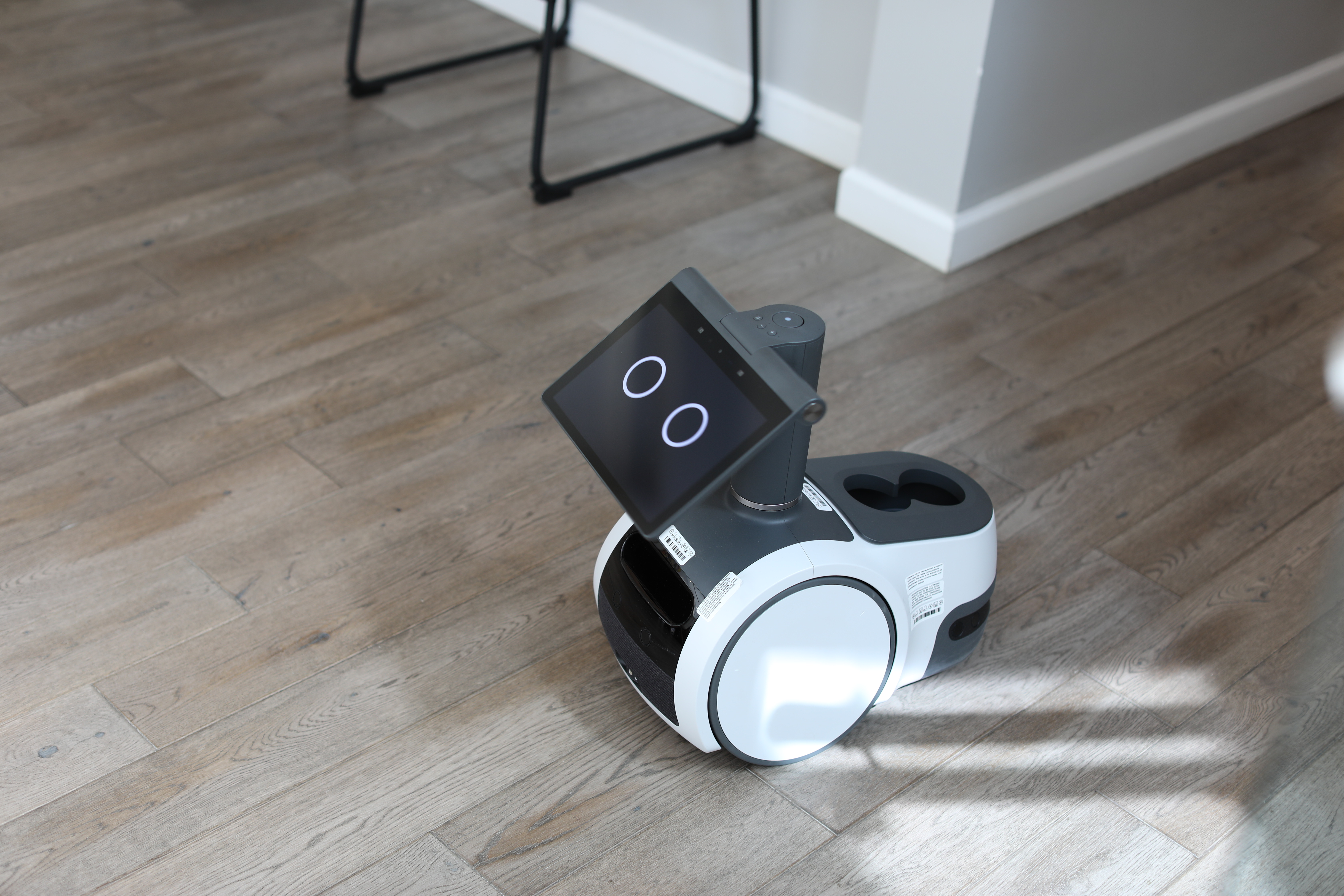 “We talked about AI, computer vision and processing power, and one of the topics that came up was robotics,” Amazon VP Charlie Tritschler tells TechCrunch. “How has robotics changed to make it maybe possible for consumers. We have a lot of experience using robotics in our fulfillment center, of course, but we thought about what could you do for the consumer in the home to make things more convenient or provide more peace of mind. That started us thinking about it, and by the end we were saying, ‘jeez, does anybody think we won’t have robotics in the home in five to 10 years?’ ” 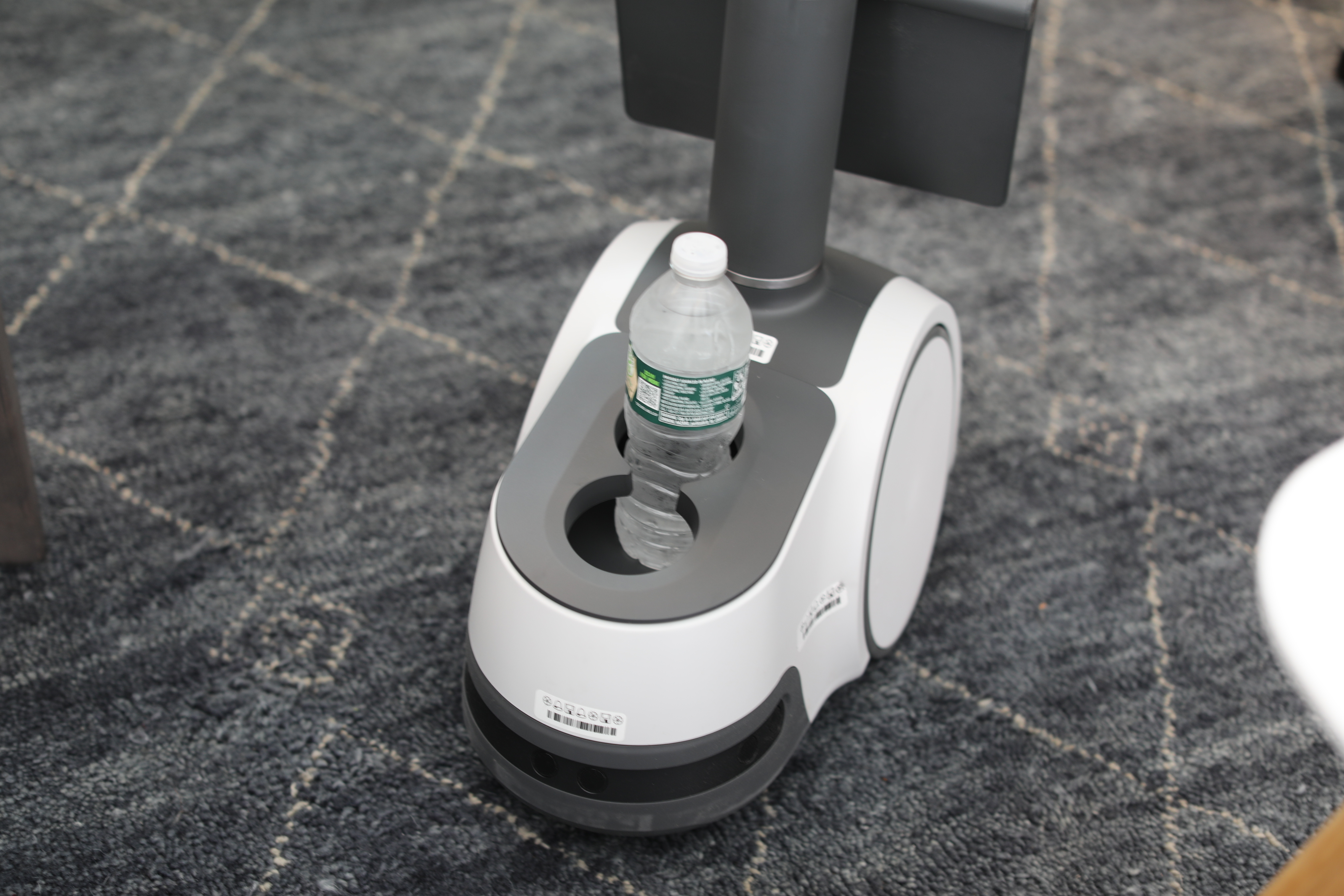 Amazon Robotics — which began in 2012 with the company’s acquisition of Kiva Systems — formed a sounding board for the consumer team’s ideas. But the company’s existing robotics are industrial and primarily focused on getting packages delivered in the least amount of time possible. Ultimately, Amazon said it had to build many of Astro’s components from scratch — including, most notably, the SLAM (simultaneous localization and mapping) system it uses to map and navigate the home.

That last bit struck me as particularly surprising, given not just how complex an undertaking it is (it’s something iRobot has effectively been iterating on for a decade), but also given some of the robotic technologies Amazon currently houses. Most notably, the company acquired Canvas, a fully autonomous warehouse cart startup, in 2019. But Amazon insists that the new SLAM system was built from the ground up, and while it considered making robotic startup acquisitions, it ultimately didn’t do so in order to build Astro. Other in-house technologies did factor in, however, including Ring’s security monitoring and various Alexa and home technologies, built into the robot, which features Amazon’s smart assistant. 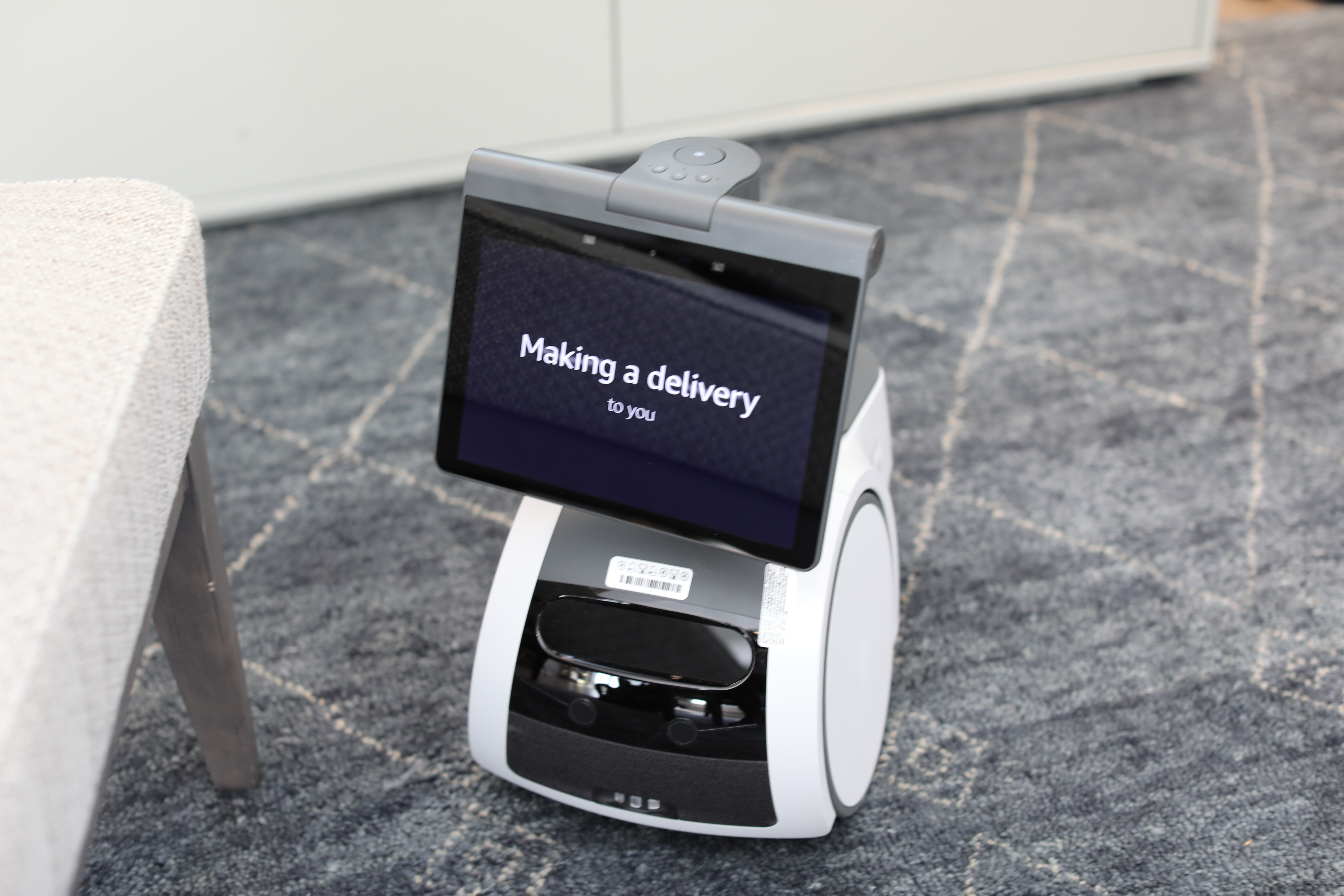 I had the opportunity to interact with Astro last week, and the robot’s got a bit of a dual personality, from that perspective. The robot’s primary personality is best described as something akin to R2-D2/BB8 or Wall-E. Its face, which is effectively a screen or a tablet, sports a pair of minimalist eyes — like a set of lowercase, bolded letter “o”s. They blink and dart around from time to time, but they’re nowhere near as expressive as what Anki hired a team of ex Pixar and Dreamworks animators to create with Cozmo.

This is augmented by the occasional bleeps and bloops, which bring to mind the aforementioned Star Wars droids. The robot can be summoned with a “Astro,” but when you need to converse more directly, that requires an “Alexa,” at which point, the familiar voice assistant takes over.

Beyond offering some personality, Astro’s 10-inch touchscreen face also serves as a standard Echo Show display, so you can do things like watch a movie, teleconference and control your smart home. The screen moves on its own and can be manually tilted 60 degrees for a better look. The screen also supports Amazon’s new Visual ID facial recognition to personalize interactions with Astro.

There are a pair of speakers on-board, as well. Though the robot itself is surprisingly quiet (it’s no robotic vacuucm). In fact, Amazon tells me that they had to introduce sound a la an electric car, so you know when it’s cruising around the house. You do hear the occasional servo sound, however, when it pivots to turn by changing the directions of its wheels.

There’s a cargo bin on the rear (which has an optional cupholder) that can carry up to 4.4 pounds. Inside is a USB-C port so you can charge your phone. Astro itself has a Roomba-like dock and takes less than an hour to charge from zero to full. 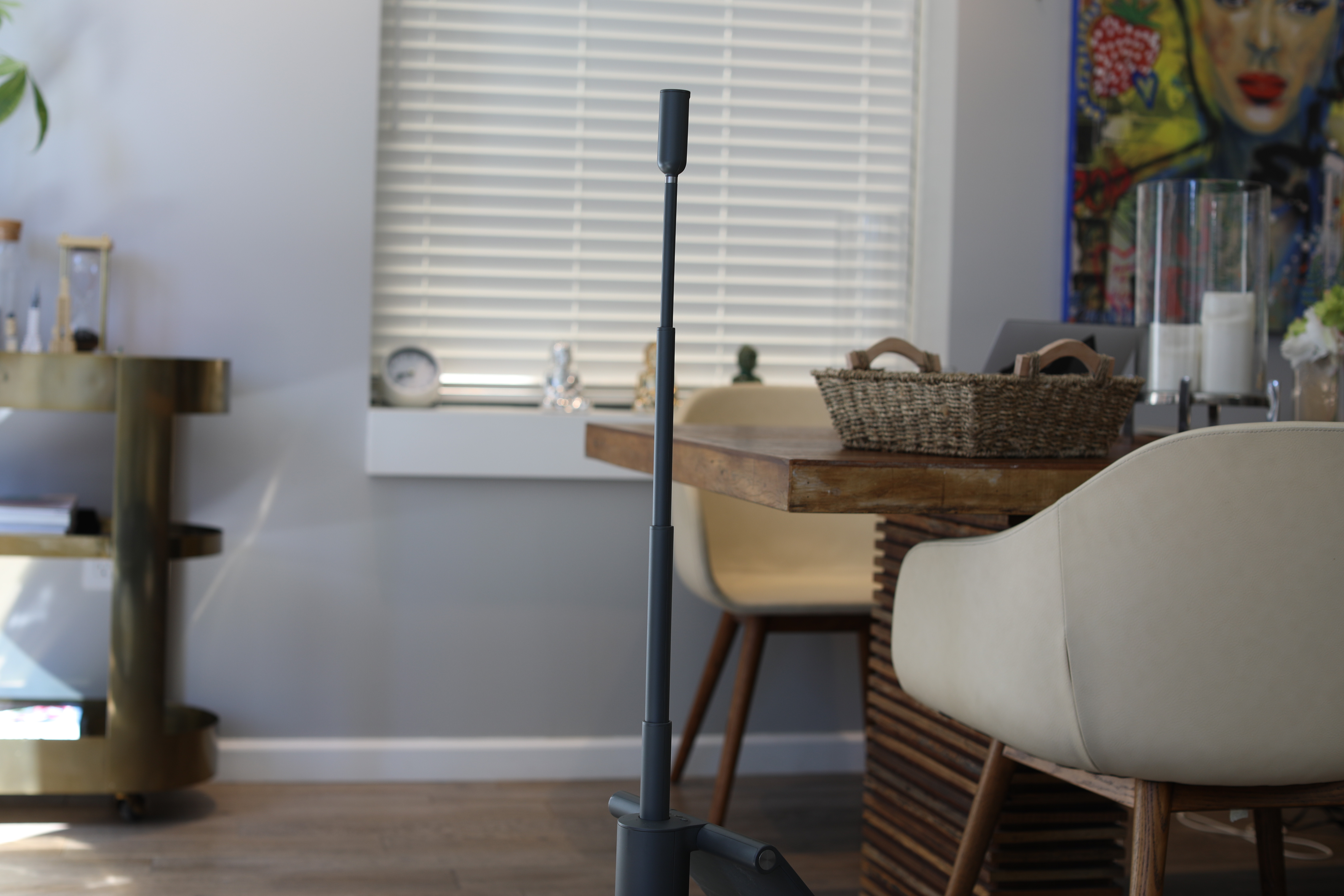 Not surprisingly, there are a whole bunch of sensors on board. That includes proximity sensors built into its base and a pair of cameras, including a five-megapixel RGB built into the bezel of its face/screen. The other is decidedly more surprising, popping out the top of its head. This 12-megapixel RGB/IR camera sticks up for livestreaming purposes. Its retractable base can extend as tall as four feet, to serve as a kind of periscope for the robot to get a better look. 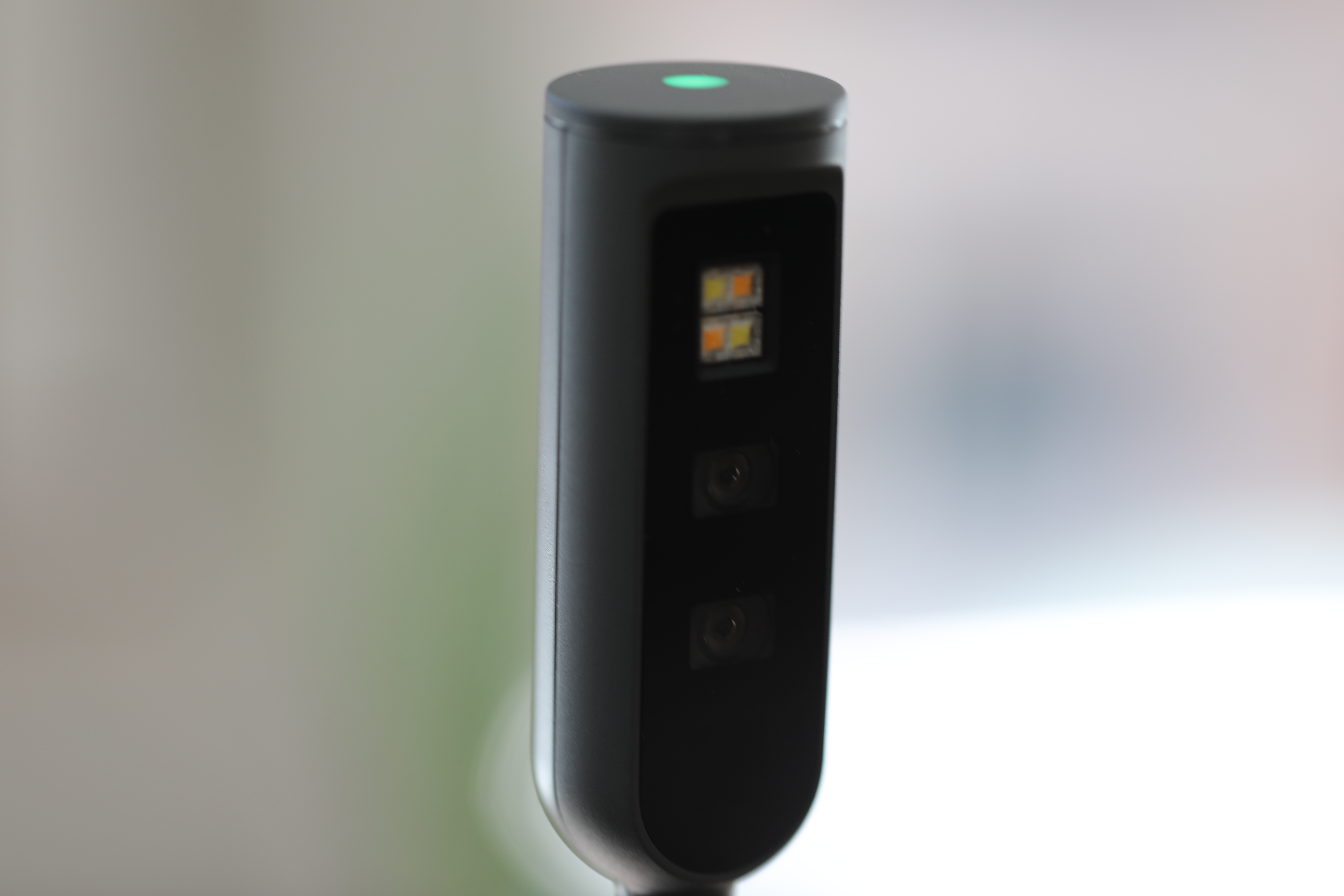 Having spent around an hour with the robot and its creators, I have to say I’m pretty impressed with what the team has built here. Of course, the question of how many people are interested in owning the thing is a different one entirely. The company says it has tested Astro in “thousands” of homes to work out some of the kinks — like getting stuck in the occasional corner. The Day One program is less a public beta than a method for gauging customer interest in the product.

“I think this is the first of the robot series that we’re doing. This is an invite-only program — we want to make sure that people that get Astro can have a great experience with it, given the challenge of homes and different spaces,” says Tritschler. “As we think long term, as we think of consumer robotics, of course we want to have all different kinds of price ranges and capabilities, and have a more directed mainstream product as part of that. But we think Astro is a good place to start to reaffirm all of the work we’ve done to create value from day one and ensure that what we’ve done actually makes sense for the consumer. We’re going to be interested in getting that feedback when we start shipping the product later in the year.”