Ring is just one part of Amazon’s annual devices and services event this year, but they’re bringing a lot of updates, including a new Pro Alarm suite that includes refreshed hardware and integrated Eero Wi-Fi 6 router capabilities. They also have a new service offering called ‘Virtual Security Guard’ that basically keeps an eye on your Ring feeds the way you would in case you can’t, and they’re improving alerts on their existing doorbells and cameras with smarter event recognition.

Ring Alarm Pro is an upgraded home security system suite that includes a base station with Eero built-in. The base station doubles as a Wi-Fi 6 router that is mesh capable for linking up to other modern Eero hardware (which is some nice consumer brand synergy for another Amazon acquisition). Ring Alarm Pro also includes 24/7 backup internet thanks to 3GB of included cellular data use per month, with extra data available at $3/1GB. Ring’s Power Pack accessories can be attached to the base station to keep the internet up and running in case of a power outage, too.

The Alarm Pro base station also has a microSD card slot with support for cards with up to 64GB in capacity, which can provide local video storage for your connected Ring cameras and doorbells.

Like Ring’s previous alarm products, it works with their motion sensors, door and window sensors and fire and moisture sensors and more. The company is also introducing a Pro tier of its subscription product ($20/month), which is how you can gain access to that cellular backup service as well as professional monitoring and (synergy again!) ad blocking, content filtering and threat protection services for your home internet via Eero.

Not to be confused with its new Pro tier subscription (which is offered alongside its existing, $10/month option), is a new separate subscription service called Virtual Security Guard that aims to replicate the benefits of having an onsite security guard.

Basically, this adds an additional level of scrutiny in terms of professional monitoring, through a partnership with monitoring company Rapid Response. Rapid Response personnel will keep an eye on the Ring camera and doorbell feeds you specify if you’re a member, responding to motion alerts and providing interventions including triggering sirens and lights, using two-way talk features and even escalating to actually dispatching emergency services should they judge that that’s required.

Ring is quick to point out the ways in which Virtual Security Guard remains wholly within the control of the individuals subscribing; cameras are opted out by default, for instance, so that a user selects which will be monitored and when. Agents also can’t activate the cameras unless they’re green lighted to be monitored in either Home or Away mode as specified by a user. They can only see real-time videos via Live View, when a motion event is detected, and videos are not saved for download or any other use by the agents. Finally, any Privacy Zones set up by a user are hidden for monitoring agents, and the Ring app also shows live when Virtual Security agents are monitoring feeds, and any past Live Views seen by the agents will also be clearly marked.

There’s no word on specific pricing here, but it sounds like it’s going to be a premium since it requires that a user have a professional monitoring plan in place already. They also have to have an outdoor, hardwired video doorbell or security cam from Ring in place in order to use the program, and it’s going to be available on an invite-only basis starting later this year. 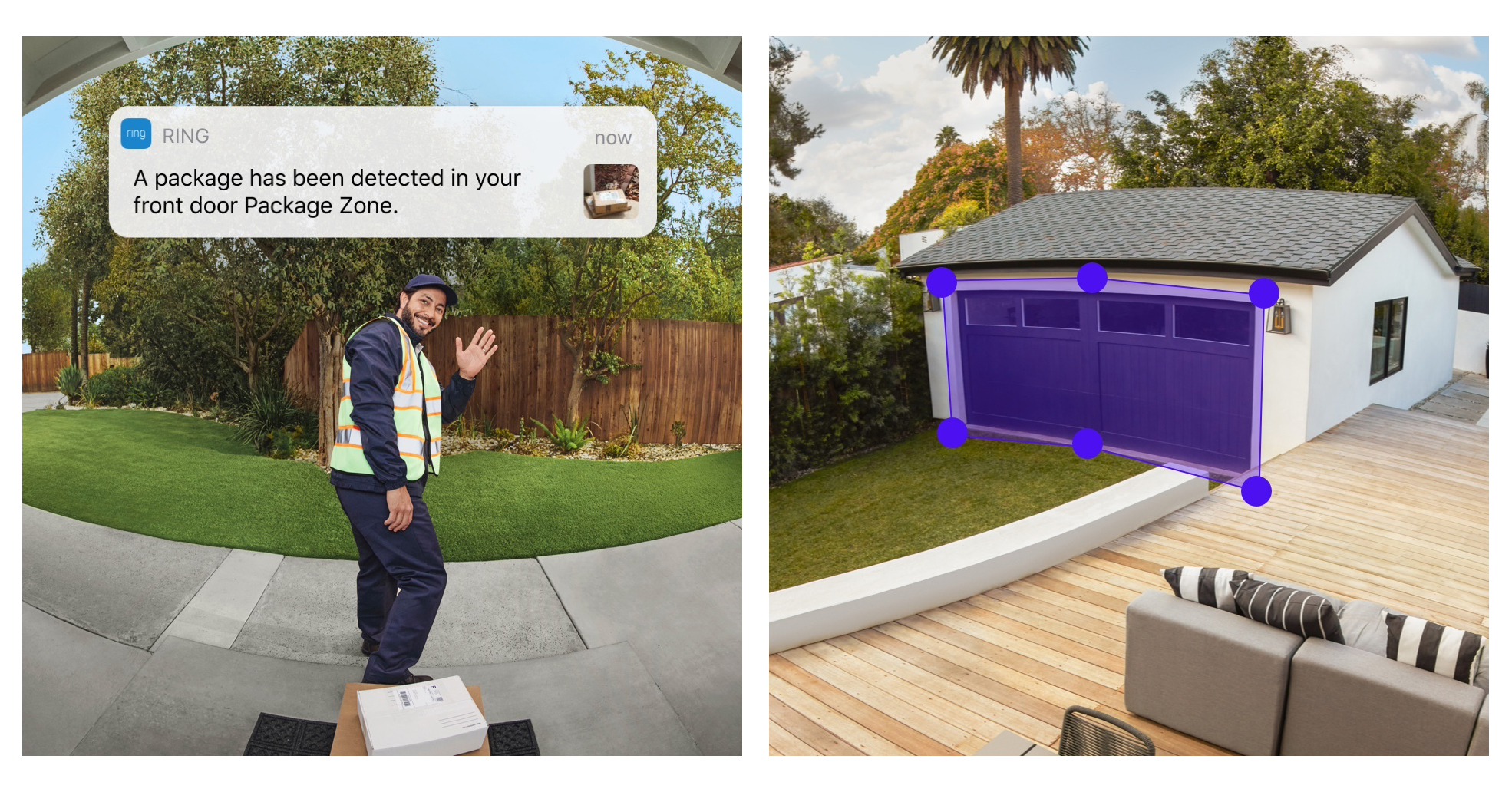 Ring has a lot of pretty flashy announcements this year, including its flying drone actually shipping, but the news that might be the most useful to most of its users is the introduction of new smart alerts, including Package Alerts and Custom Event Alerts.

Package Alerts do exactly what they say, offering you the ability to specify a zone of your choosing and get an alert anytime a package is present in that zone. So you could set it up to watch your front step or your porch, for instance, and get an alert about anything Amazon (for instance) drops off there.

Custom Event Alerts apply for Spotlight Battery Cam users, again provide they have a Ring Protect Plan, and will offer a bit more custom flexibility. So you can, for instance, use a still of your garage door closed as captured by your Ring, and a still of it open, and teach it to differentiate between those two states and alert you about state changes when they happen. Ring mentions this can work with gates and doors, and other types of state changes as defined by users. It’s going to start rolling out a bit later than Package Alerts, with availability expected “in the coming months.” 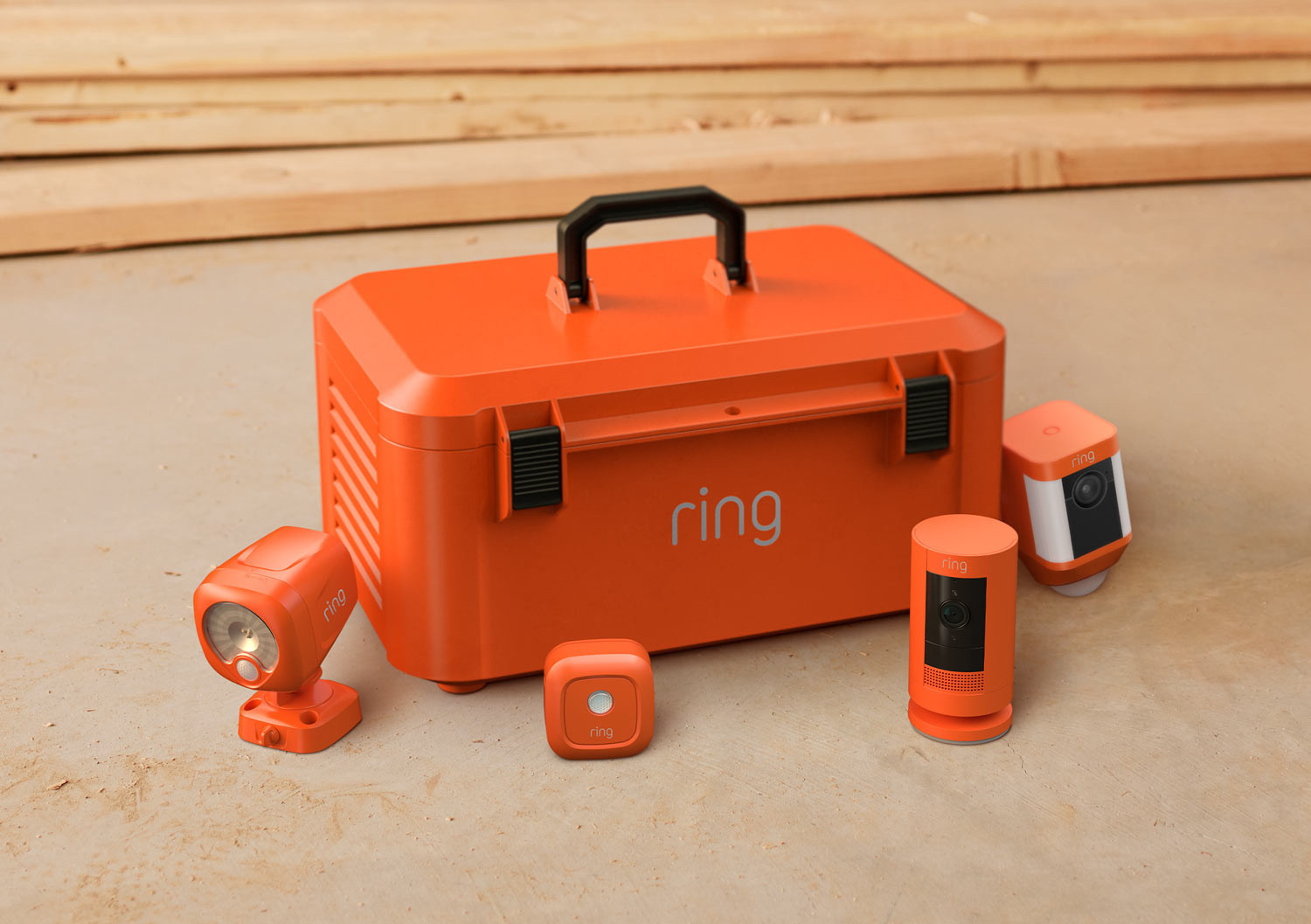 Last but not least, Ring is targeting the contractor and job site management crowd with Jobsite Security, a product based around the Ring Alarm Pro that tweaks it for professional use with upgrades like Outdoor Contact sensors for keeping track of gate open/closed status, for instance. There’s also a lot of Safety Orange involved, which reflects the target audience (pun intended because safety orange is in part used for its reflectivity).

Jobsite Security is a team-up with The Home Depot, which will sell it exclusively starting at $399.99. It’s a smart extension of the company’s brand beyond the domestic sphere, and may be a precursor to more B2B efforts to come.