As cybersecurity becomes a bigger and more complex problem for organizations, a startup aiming to increase its accuracy in fighting breaches — by bringing in an ever-wider funnel of data and vantage points to identify issues — is expanding its business.

SenseOn, which employs cloud-based, AI powered techniques for its so-called “triangulation” approach to the challenge of cybersecurity covering endpoints, networks and microservices, has picked up $20 million. The Series A is led by Eight Road Ventures, with MMC Ventures, Crane Venture Partners and Winton Ventures Limited — all existing backers — also participating. SenseOn — not to be confused with cabinet security business Senseon — previously raised $6.4 million in a seed round of funding in 2019.

The funding is coming on the back of very strong growth, both the bad and good kind.

The bad growth is the sort that we unfortunately hear about every day, in the form of cybersecurity breaches: SenseOn estimates that compromised records passed the 37 billion mark in 2020 — up 141% over 2019.

The good growth is that SenseOn itself has been rising to the challenge for its customers, and as a result its own business has grown (in revenues and engagements) by over 350%. The London-based startup, founded and led by David Atkinson — who had previously been the commercial director for Darktrace and before that spent years pioneering new cybersecurity techniques at the U.K.’s Ministry of Defense as well as other military and government roles — counts a number of financial services firms, consumer businesses and government organizations among its customers.

The problem that SenseOn has identified is that the world of security today has evolved to contain a plethora of point solutions, as well as differing approaches within those point solutions, to address different aspects of the cybersecurity challenge. While some of these are very effective, they are only taking on some of the battle, and if an organization wants to adopt the most secure policy, it might use a number of these in tandem, which in turn can slow down systems and response, or create other issues within them.

SenseOn’s solution has been to build a system that essentially aims to do everything together, with some parts of the solution built by itself, and some parts integrating with other products. 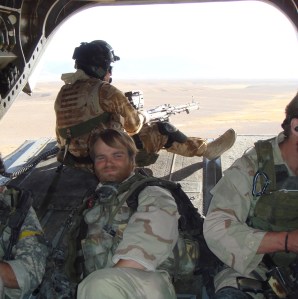 Atkinson describes the approach not unlike “how a human analyst thinks” (which is why the AI aspect of the service, balancing different streams of information, is central to the approach). He also says it is similar to how a global positioning system works: “the more satellites [a GPS] triangulates off, the more accurate it is.”

And to borrow a little from Atkinson’s previous role in the military (he’s pictured here, on the right, in a helicopter in Afghanistan years ago), SenseOn is building not just weapons that security specialists can use to do their jobs better — the platform and the apps — but also ammunition — in the form of data that SenseOn picks up and organizes — to use with those weapons.

Acknowledging the fragmentation inherent in a lot of the most intelligent security technology point solutions, and tackling that by integrating different silos of information to create more complete pictures, is something that seems to be catching on. I’d also argue that it is a sign of the industry maturing, with possibly some distinct platforms emerging as a result.

Cybellum, which LG acquired last week, is taking the same approach but focusing specifically on automotive security (which itself is also very fragmented because of the multiple OEMs and technology systems involved). Others like ActZero are taking the same approach but specifically for one segment of the market, SMBs. Others are looking at specific pain points that result from the fragmentation, such as Secureframe with security compliance, Axonius with managing a plethora of endpoints or vArmour with the challenges of working across multiple clouds.

Making a platform play is significantly more ambitious, in particular in a market with so many strong point solutions, but with a lot of traction already for SenseOn, it’s a bet that investors want to take. “SenseOn is poised to become a global cybersecurity leader,” said Alston Zecha of Eight Roads Ventures in a statement. “We have long looked for a company which coordinates detection intelligently across domains and can consolidate multiple tools into one solution. SenseOn does this and more. We are privileged to partner with such a thoughtful and high-integrity group as Dave and team.”