Earlier this year, Ford Motor Company announced an investment of $30 billion toward electrification by 2025. On Monday, the automaker unveiled some specifics for that plan. Ford and its battery joint venture partner, SK Innovation, will be investing $11.4 billion in the two new campuses it plans to build in Kentucky and Tennessee to produce the next generation of electric F-Series trucks and the batteries to power both Ford and Lincoln vehicles.

Alongside this investment, Ford has also outlined existing plants that it has repurposed to accommodate manufacturing for electric vehicles.

Let’s take a look at where Ford is now and how its electrification footprint will change in the coming years.

In May, Ford and SK Innovation signed a memorandum of understanding to establish a joint venture to domestically manufacture batteries for electric vehicles. The joint venture, BlueOvalSK, aims to produce around 60 GWh of energy annually starting in 2025.

Now BlueOvalSK is spending $5.6 billion on a mega-campus in Stanton called Blue Oval City, which is expected to create around 6,000 new jobs and a new model for vehicle and battery manufacturing. The site is also close to Ford’s battery cell assembly and e-motor plant in Rossville, Tennessee.

Ford and SK Innovation announced on Monday an additional $5.8 billion spend on a battery manufacturing campus to open in Glendale in 2025. The 1,500-acre facility will bring 5,000 new jobs to Kentucky, and it’s well-placed to supply Ford’s Louisville assembly plant, which currently produces the Ford Escape hybrid and plug-in hybrid and the Lincoln Corsair plug-in hybrid.

Both Blue Oval City and BlueOvalSK battery manufacturing campus are expected to be capable of producing up to 43 GWh each, or a total of 86 GWh annually, in order to power Ford’s next generation of electric vehicles.

Only 30 minutes’ drive from where it all began, Ford aims to build its Ford Ion Park, a battery R&D facility where the automaker will house up to 200 battery technology experts and purchasing and finance leaders to help develop and manufacture lithium-ion and solid-state battery cells. Ion Park represents $100 million of a total $185 million investment into building higher-volume battery cells at lower costs.

Ford will refurbish an existing 270,000-square-foot facility to include pilot-scale equipment for electrode, cell and array design and manufacturing engineering and innovation, according to the company. A nearby batteries benchmarking test lab in Allen Park will support Ion Park as it tests cell construction and chemistries. Ion Park will also be close to Ford’s product development center in Dearborn, and its 1,100-acre Dearborn truck plant, which currently produces the F-150 hybrid and the Raptor.

Ford also has plans to utilize its existing plants around the country to aid its push for electrification. In Michigan, the company has identified its Rouge Complex, the Livonia Transmission Plant, the Rawsonville Components Plant and the Van Dyke Electric Powertrain Center.

Ford is building an Electric Vehicle Center as part of its historic Rouge Complex in Dearborn, which is conveniently located close to the Truck Plant. This center will house the production of the Ford F-150 Lightning pickup truck. A spokesperson for Ford told TechCrunch the Rouge plant has started pre-production for test vehicle there, but has not yet begun mass production for commercial sales. 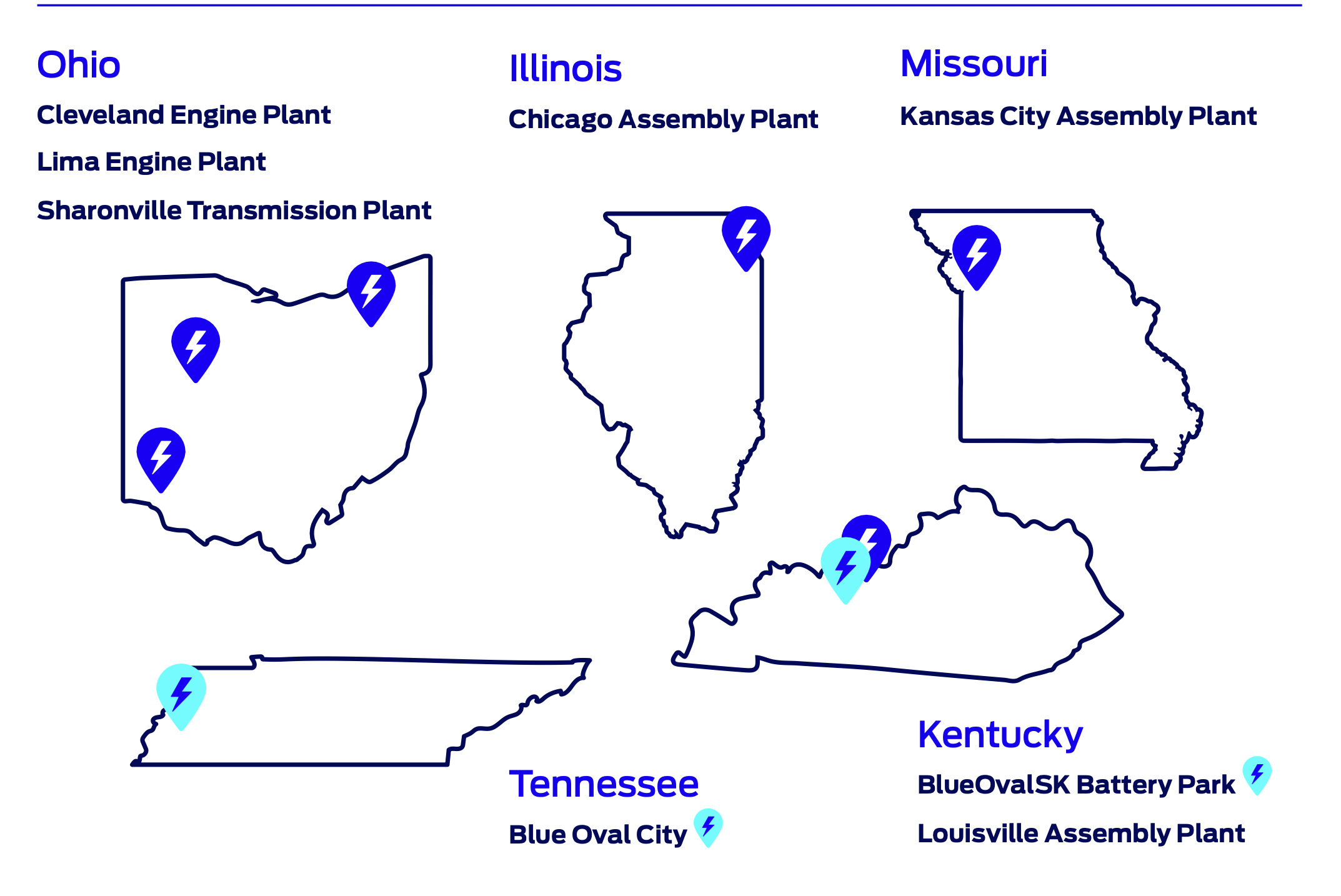 Ford has also outlined existing assembly and transmission plants in Ohio, Illinois and Missouri for electrification production. In Ohio, Ford has identified the Cleveland and Lima Engine Plants and the Sharonville Transmission Plant, which currently all seem to still produce ICE engines or transmissions. A Ford spokesperson said these plants are all producing components for electrified vehicles, but not all-electric vehicles.

At the Chicago, Illinois Assembly Plant, the current vehicles produced are the Ford Explorer plug-in hybrid, a hybrid Police Interceptor Utility vehicle and the Lincoln Aviator Grand Touring hybrid. The Kansas City, Missouri plant currently produces the Ford F-150 and the e-Transit cargo van, which will be coming to market this year, says a Ford spokesperson.

This article has been updated to reflect new information from Ford Motor Company.