The proliferation of affordable and fast mobile data allowed hundreds of millions of Indians to come online for the first time in the past decade. But there are scores of areas in the South Asian nation’s economy that remain largely offline. One of those is factories. There are about 150,000 factories in India, but the vast majority of them lack digital means to connect and sell their products to retailers.

About six years ago, a team of four people (Siddharth Vij, Chaitanya Rathi, Siddharth Rastogi and Shubham Agarwal) — all of whom had either personal or family background in the manufacturing business — came together to tackle this challenge.

On Tuesday, they announced that their effort — the startup Bijnis — continues to make inroads in the market and has won the trust of several investors.

Bijnis has raised $30 million in a Series B financing round led by Westbridge Capital, they announced. The new funding also saw participation from existing investors including Sequoia India, InfoEdge, Waterbridge Ventures and Matrix Partners India.

The New Delhi-headquartered startup operates an eponymous mobile app that Vij, in an interview with TechCrunch, described as an “operating system for factories.”

The Bijnis app helps factory operators generate demand from buyers and other retailers alike and also helps them procure supplies. It also offers manufacturers with logistics and payments services — through partnerships with several popular players in the industry.

“The problem is that these manufacturers spend the vast majority of their time running factories. So they rely on wholesalers and other agents for buying and selling. These players don’t share the identity to the buyers as this is how they get to squeeze a lot of money from the manufacturers,” he explained.

Bijnis is trying to remove the traditional agents from the equation to help manufacturers considerably improve their profits — and also aggressively expand by discovering new customers. One of the ways it is doing so is by helping these businesses establish a digital presence so that anyone can find them online, he said. 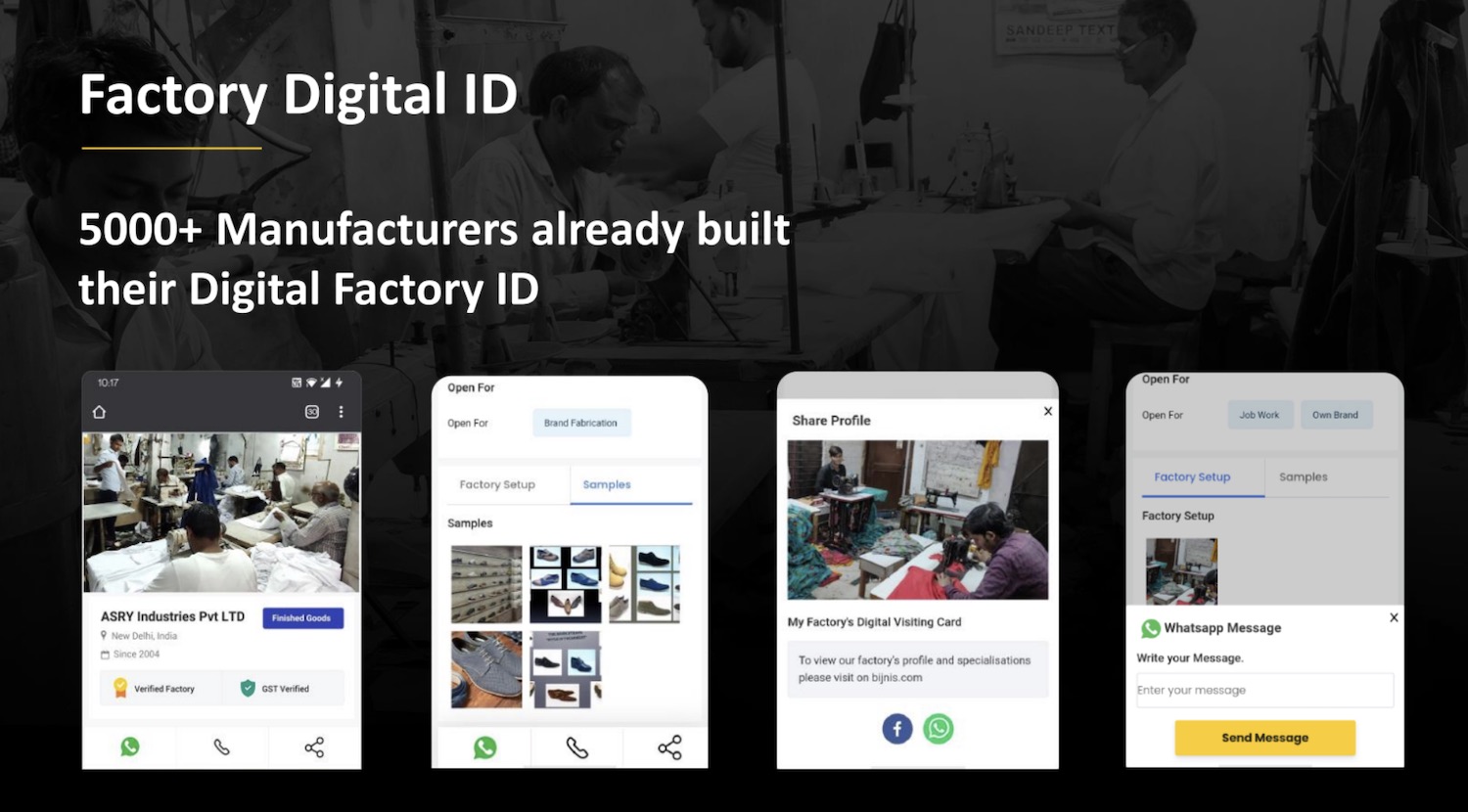 A slide from the pitch deck the startup shared with TechCrunch. Image Credits: Bijnis

“The founding team has very strong category understanding given their family background in manufacturing and that has enabled them to build a compelling proposition for manufacturers and retailers in the fashion and lifestyle categories,” said Sandeep Singhal, partner at Westbridge Capital, in a statement.

More than 5,000 factories operating in fashion, footwear and lifestyle categories are now using the Bijnis app, said Vij, adding that the startup has so far focused more on ensuring that the factories that come to the platform are able to generate enough demand rather than trying to court as many manufacturers as possible. The platform has also onboarded over 100,000 retailers.

But the new fund, the startup said, will help it win more manufacturers and retailers as increasingly more businesses are becoming aware of Bijnis’ offerings. The startup, which employs over 200 people, also plans to broaden its product offerings, he said.

“Traditional supply chains in lifestyle categories in India continue to be extremely unorganised and fragmented. Small and medium manufacturers are the backbone of these supply chains, representing a significant part of India’s manufacturing economy, which is at the brink of massive transformation driven by rapid digitisation across layers,” said Shraeyansh Thakur, vice president at Sequoia India, in a statement.

“The team is very excited about Bijnis’s vision of building an operating system for manufacturing in this segment and look forward to partnering them on this mission.”