Millions of people in sub-Saharan Africa and emerging markets continue to live without access to electricity. Some reports peg these numbers between 500 million and 2 billion people despite the prevalence of renewable energy providers in these regions.

Zola Electric, one such provider, is announcing today that it has closed $90 million in new funding to enter new markets and drive distributed renewable energy.

When Zola Electric was launched in 2011 by Erica Mackey, Xavier Helgesen and Joshua Pierce, the company provided solar home solutions to off-grid rural communities in Tanzania.

The company has evolved since then. In an interview, Bill Lenihan, the CEO who joined in 2015, told TechCrunch that Zola Electric found over time that its singular product could not work for the entire market of customers it wanted to go after — from off- or on-grid to rural or urban and residential or commercial.

“More than 2.2 billion people in the world lack access to reliable and affordable energy. We needed an energy ladder and a series of products that were all connected in some ways but solve different problems for these 2.2 billion people,” he said. “So we then started to grow and provide more power in these systems.”

Zola has now become a technology company whose products can solve energy access problems in almost any market, the company said in a statement.

Last year, Zola launched Infinity, a product the company says can power any home or office appliance while integrated into any energy source — grid, solar or battery. The product works with power grids, solar panels and other power sources before switching to a ready energy source and storing it simultaneously. 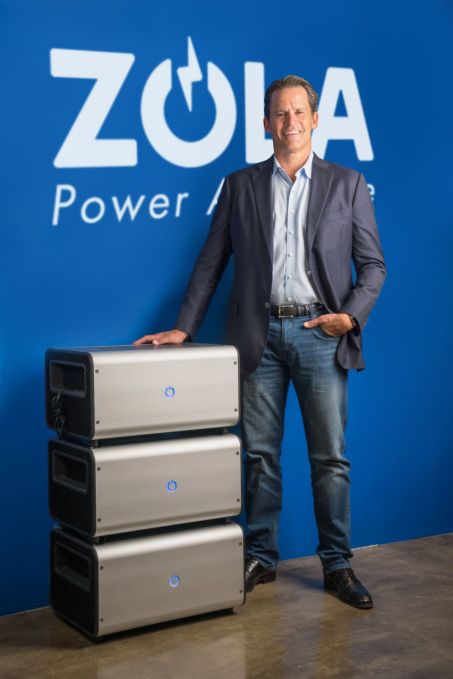 These solutions are managed by Zola’s SaaS software system called Vision and it provides customers with data, analytics and control of their systems.

“What we have is the semblance of an energy ladder where we can pretty much go into any market and solve any problem, no matter what. Now, there are still gaps in that technology and market segments that we haven’t addressed. And that’s where our development and capital is going — to fill out that energy ladder.”

“This group brings more than just capital to the equation. They bring strategic benefit to this company and awareness that is over and above the capital. And importantly, this is the group that demonstrated their confidence and desire to really solve what is a global problem,” said the CEO.

Lenihan shares his view on how the Infinity product is the answer for people in emerging markets where lack of power has resulted in the installation of millions of backup solutions like diesel generations and lead-acid batteries — solutions that can are unreliable and can be difficult to use and manage.

He describes the system as an epicentre of energy provisioning. With a similarity to the offline grid, Infinity connects to all the loads in a residence or business place and controls them digitally while providing data and analytics in the process.

“These are the core differences. The solutions in this part of the world today are backup systems. Zola is primary power, and that’s how we differentiate ourselves.”

Outside Africa, the company is also present in the U.S., Brazil, Pakistan, and the Philippines. It has plans to expand further into Northern Africa, Asia and South America.

While speaking with Lenihan, two primary metrics from this news struck me — the total number of users and the growth-stage non-billion-dollar valuation round.

For a startup around the block these past 10 years, a little over a million customers seems like a meagre sum. While Lenihan somewhat agrees, he cited the concept of digital distributed energy which is yet to take off globally (the startup only employed last year) and a dearth of on-the-ground personnel as reasons behind the seeming low figure.

“It’s not as simple to create technology and drop into the shores of whatever country and think your product would get installed. We need on-the-ground personnel, strong developers and integrators and distributors; people who can connect with the customer on the ground, solve their problems, install the systems and service those systems,” he said.

In addition, this current round comes after Zola’s Series D equity round of $55 million in 2018. Lenihan did not disclose if this present round is Zola’s Series E which if it was the case, would look like a down round. However, the company confirmed that it isn’t a down round.

Since 2011, the company has raised over $230 million in debt and equity financing. And in this age of unconventional rise in funding and valuations, any startup having raised that amount of venture capital could be easily worth a billion dollars. However, that’s not the case with Zola, at least not just yet. When asked about valuation, Lenihan said he thinks about valuation differently from the traditional market play and only stated that “the company is very valuable.”

That said, Lenihan is enthused and believes that digital distributed energy would fix the problems faced by emerging markets faster than other traditional energy providers.

“This is a different ballgame because most people initially thought the solar systems would solve emerging markets’ energy problems because Western technology backup systems and inverters are solid. But now it’s not that solid. We need to start from scratch. We need grid-like characteristics in these markets, and we need integration, modularity and intelligence. That’s our view.”

UPDATE: According to Zola, the figure we attributed to its total fundraise ($230 million) is inaccurate. The company says it has raised $155 million in equity with a total debt balance of $45 million.