Roblox is introducing an optional age verification for its users that will combine an ID check with a selfie scan. While the system will not be needed to play most Roblox games, it will be required for those who want to gain early access to Roblox’s upcoming voice chat features when they roll out later this fall. Additionally, the company says developers will be able to create new experiences that will rely on identity verification in the future.

The verification system is an acknowledgment that many of Roblox’s core users are aging up. The company said earlier this month, when introducing its new “Spatial Voice” feature, that 50% of its users are now over the age of 13. It’s also seeing the most explosive growth among the 17 to 24-year old demographic.

Spatial Voice, which will allow Roblox gamers to have real voice conversations while in games, will initially be made available to a group of 5,000 developers, all 13 and older, who will be able to test voice chat in a custom-built Roblox community space. The rollout to Roblox’s wider user base will proceed slowly, as it will require new moderation tools and safety features to be built in parallel, the company had said. Age verification is now one of those tools. 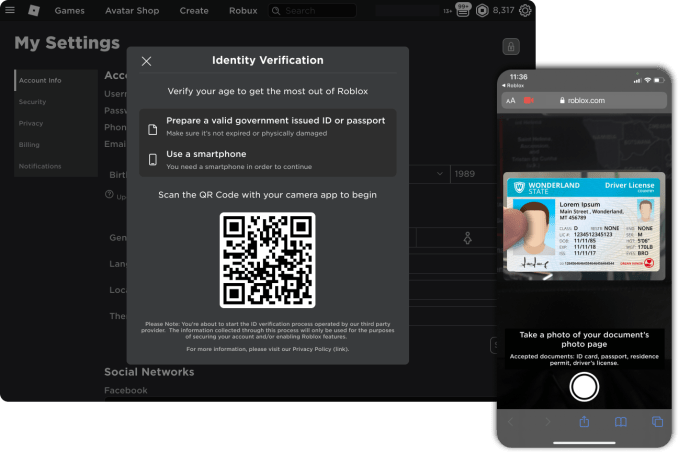 First, using the app, Roblox users will scan an ID card, driver’s license, passport or other government ID. The company says it won’t store the raw ID document data. Instead, an anonymized value is generated, which allows Roblox to verify the identity without risking exposure of the user’s real identity. Roblox matches the data on the document to a library of thousands of global document types to determine if it’s legitimate. After scanning, the user will take a selfie to verify they are a living individual as opposed to having uploaded a selfie image — something that could be automated to trick the system. The selfie is then matched to the person on the document. The process takes a few seconds after the image is snapped, Roblox says.

It’s fairly common for identity verification to be offered on social platforms, as an optional tool. Facebook, for example, may ask users to verify their identity to use its payments or donations services or to have their profile or Page verified. Twitter may also ask for an ID to verify accounts. Tinder recently made its own ID verification available to members, as well.

However, in Roblox’s case, verification will become more common as it’s tied to access to newer voice-enabled games and experiences down the road. Roblox hasn’t yet said what, if any, alternative methods of verifying age for voice chat it may later employ.

The company notes that developers and creators will be able to use verification as a signal of trust when looking for collaborators, too — the verified status, in this case, may hold the same sort of clout that it does elsewhere in social media. On this front, Roblox this summer launched a Talent Hub, where users can look for jobs within the Roblox developer community.

Age verification is rolling out gradually, starting today, and will reach all users over the next few weeks. The opt-in feature will be globally available to everyone 13 years old or older in more than 180 countries on both desktop and mobile.

“Age Verification marks a big milestone in our long-term vision of building a trusted, fun, and civil platform for everyone,” noted Roblox Senior Product Manager Chris Aston Chen, in an announcement. “As part of that vision, we will continue to work on seamless ways to verify a user’s age, always respecting a user’s privacy. Over time, we’ll continue to introduce new and innovative ways for users to easily and securely maintain and protect their identity on the Roblox platform, unlock new and immersive social capabilities, and build and enjoy amazing experiences together,” Chen added.