PayPal has been talking about its “super app” plans for some time, having recently told investors its upcoming digital wallet and payments app had been given a go for launch. Today, the first version of that app is officially being introduced, offering a combination of financial tools including direct deposit, bill pay, a digital wallet, peer-to-peer payments, shopping tools, crypto capabilities and more. The company is also announcing its partnership with Synchrony Bank for its new high-yield savings account, PayPal Savings.

These changes shift PayPal from being largely a payments utility that’s tacked on other offerings here and there, to being a more fully fleshed out finance app. Though PayPal itself doesn’t aim to be a “bank,” the new app offers a range of competitive features for those considering shifting their finances to neobanks, like Chime or Varo, as it will now also include support for paycheck Direct Deposits through PayPal’s bank partners with two-day early access, bill pay and more.

These features could make PayPal more competitive, as getting paid earlier has been one of the bigger draws among those considering digital banking apps instead of using traditional banks.

In addition to shifting their paychecks to Payal, customers’ PayPal funds can then be used for things that are a part of daily life, like paying their bills, saving or shopping, for example.

PayPal’s new ‘super app,’ to include messaging, is ready to launch

The enhanced bill pay feature lets customers track, view and pay bills from thousands of companies, including utilities, TV and internet, insurance, credit cards, phone and more, PayPal says. When bill pay first arrived earlier this year, it offered access to (single-digit) thousands of billers. Now, it will support around 17,000 billers. Customers can also discover billers through an improved, intelligent search feature, set reminders to be notified of upcoming bills and schedule automatic payments for bills they have to pay on a regular basis. The bills don’t have to only be paid from funds currently in the PayPal account, but can be paid through any eligible funding source that’s already linked to their PayPal account.

Via a Synchrony Bank partnership, PayPal Savings will offer a high-yield savings account with a 0.40% Annual Percentage Yield (APY), which is more than six times the national average of 0.06%, the company says. However, that’s lower than top rivals in the digital banking market offer, like Chime (0.50%), Varo (starts at 0.20%, but users can qualify to get 3.00% APY), Marcus (0.50%), Ally (0.50%), ONE (1.00% or 3.00% on Auto-Save transactions), and others. However, the rate may appeal to those who are switching from a traditional bank, where rates tend to be lower.

PayPal believes its high-yield offering will be able to compete not based on the APY alone, but on the strength of its combined offerings. 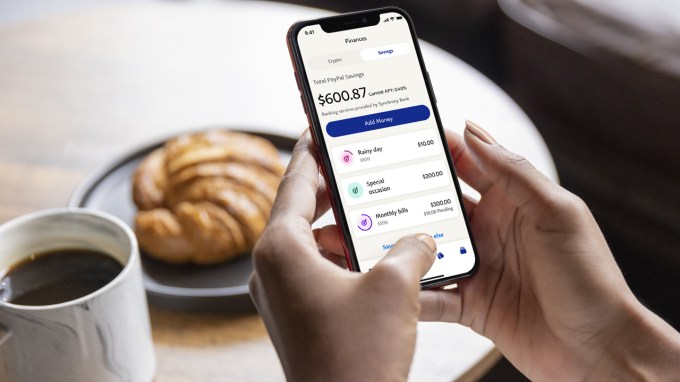 “We know that about half of customers in the United States don’t even have a savings account, much less one with a very competitive rate,” notes PayPal SVP of Consumer, Julian King. “So all in all, we think that by bringing together the full set of solutions on the platform, it’s a really competitive offering for an individual.”

The app has also been reorganized to accommodate the new features and those yet to come.

It now features a personalized dashboard offering an overview of the customer’s account. The wallet tab lets users manage Direct Deposits and connect funding sources like bank accounts and debit and credit cards alongside the ability to enroll in PayPal’s own debit, credit and cash cards. And a finance tab provides access to the high-yield savings and the previously available crypto capabilities, which allows users to buy, hold and sell Bitcoin, Ethereum, Bitcoin Cash and Litecoin.

The payments tab, meanwhile, will hold much of PayPal’s traditional feature set, including peer-to-peer payments, international remittances, charitable and nonprofit giving, plus now bill pay and a two-way messaging feature that allows users to request payments or say thank you after receiving a payment — whether that’s between friends and family or between merchants and customers. This addition could bring PayPal more in line with PayPal-owned Venmo, which already offers the ability to add notes to payments and make comments.

Messaging also ties into PayPal’s new Shopping hub, which is where the company is finally putting to good use its 2019 $4 billion Honey acquisition. Honey’s core features are now becoming a part of the PayPal mobile experience, including personalized deals and exclusive rewards. 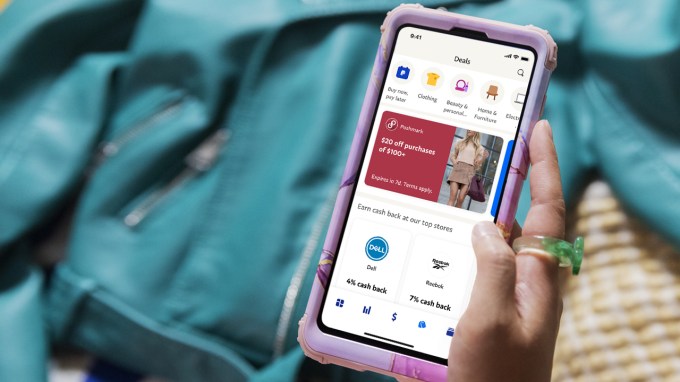 PayPal users will be able to browse the discounts and offers inside the app, then shop and transact through the in-app browser. The deals can be saved to the wallet for future use, so they can be applied if shopping later in the app or online. Customers will also be able to join a loyalty program, where they can earn cashback and PayPal shopping credit on their purchases. The company says these personalized deals will improve over time.

“We’ll use AI and [machine learning] capabilities to understand what kind of shopping deals are most interesting to customers and continue to develop that over time. They’ll just get smarter and smarter as the product gets more usage,” notes King. This will include using the data about the deals a customer likes, then bringing similar deals to them in the future.

Also new in the updated mobile app is the addition of PayPal’s crowdsourced fundraising platform, the Generosity Network, first launched late last year. The network is PayPal’s answer to GoFundMe or Facebook Fundraisers, by offering tools that allow individuals to raise money for themselves, others in need, or organizations like small businesses or charities. The network is also now expanding to international markets with Germany and the U.K. to start, with more countries to come.

As PayPal has said, the new app is laying the groundwork for other new products in the quarters to come. The biggest initiative on its roadmap is a plan to enter the investment space, to rival other mobile investing apps, like Robinhood. When this arrives, it will support the ability to buy stocks, fractional stocks and ETFs, PayPal says.

It will also later add support for paying with QR codes in an offline environment, and tools for using PayPal to save while in stores.

The updated app is rolling out starting today in the U.S. as a staggered release that will complete in the weeks ahead. However, PayPal Savings won’t be available immediately — it will arrive in the U.S. in the “coming months,” as will some of the shopping and rewards tools.