Traditional meat production is about as far from a sustainable process as we’ve got, but our chances of getting everyone to give up “real” meat are lean. Animal Alternative is one of several companies looking to make meat indistinguishable from the animal-based kind using bioreactors and cultured cells, and it aims to empower local producers to do so with a customizable process powered by data and AI.

Animal Alternative, which presented today at TechCrunch Disrupt Startup Battlefield, is the brainchild of two Cambridge grads who repeatedly encountered each other during their studies in biotech there. Clarisse Beurrier and Yash Mishra found that they shared a conviction that meat production desperately needs a reboot, and their skills complemented each other as well. They decided to start a company to pursue a new, data-heavy approach that could make cultured meat production as much a software problem as a hardware one.

Cell-cultured meat, in case you’re not familiar, is where cells derived from animal tissue are grown in an artificial environment until they are numerous enough to be considered what might generally be considered “a piece of meat.” But you can’t just shave some beef off into a nutrient tank and hope it grows into a 12-ounce ribeye — recreating tissue the way it grows in nature is remarkably difficult. Animal Alternative believes data is the answer.

Mishra hails from a lab that was doing bioelectric monitoring of cells and tissues for research and medical purposes, and it occurred to him and Beurrier that the same technique could be applied to meat production. 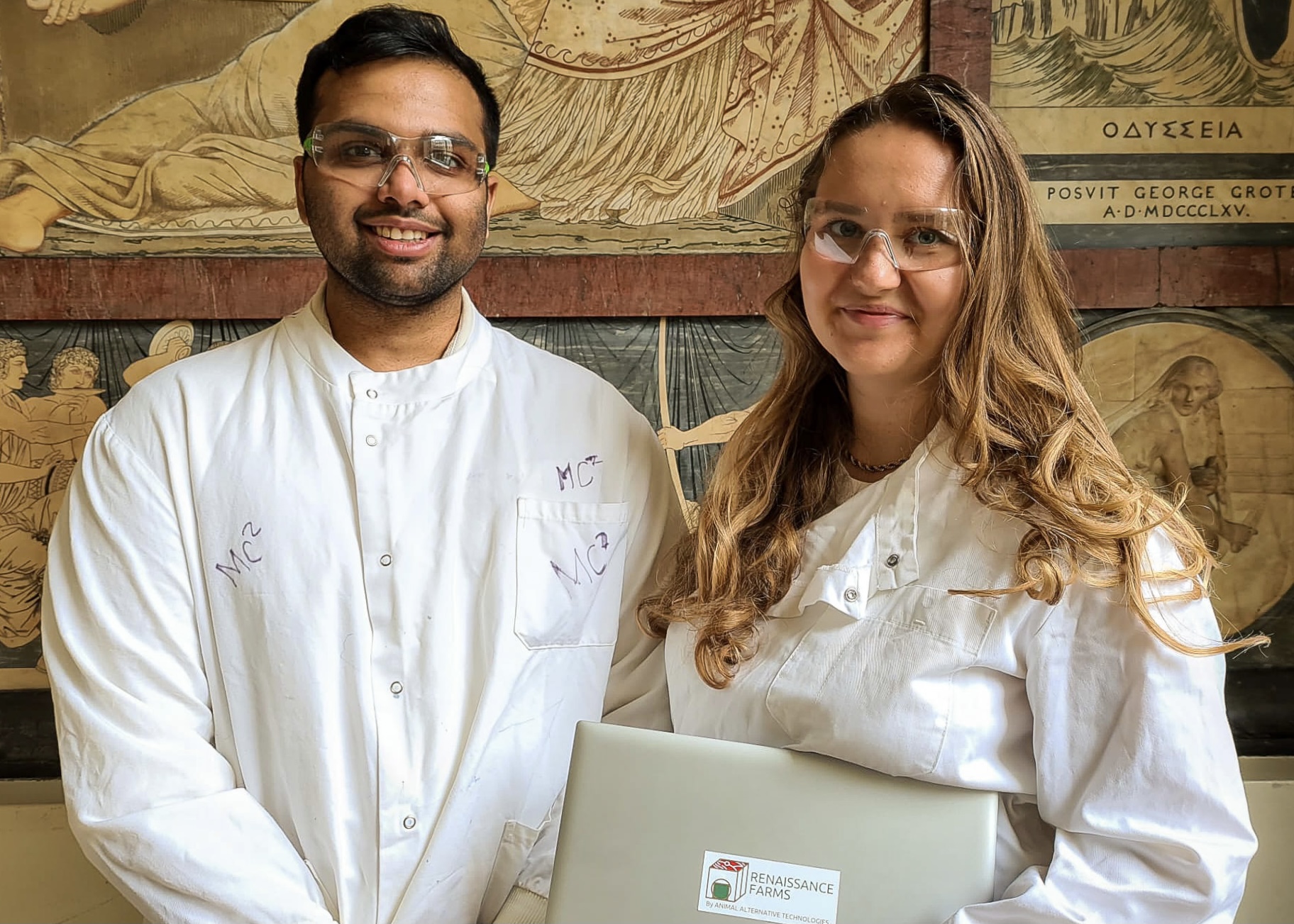 “We created these bioreactors, smaller than my thumb, that let us use minimal resources and get lots of information, so we can find the best process for making meat in a sustainable way,” he said.

Monitoring cells for any reason is a complex proposal, often involving slow and outdated techniques like stains and collecting samples to test elsewhere. Beurrier explained that their innovation is in both improved real-time cell-monitoring tech and the instant feedback it enables to guide the whole process of cell growth.

“Everything has to work together. If, for example, our clients want to make a piece of lamb, there are all these parameters. It’s a very dynamic process,” she said. Although they were wary of revealing too much about the patent-pending bioreactor, the two explained that it provides powerful monitoring and AI-powered feedback.

“A lot of parameters, such as nutrients, flow rates, pH, temperature, etc., have a major impact on the taste, texture and quality of meat produced. Our proprietary bioelectronic analytics give us unprecedented insights into these,” Mishra explained. “Our revolutionary platform also includes AI-driven software that uses all the data we have to help us reduce costs and improve efficiency. This has already reduced costs and energy requirements by over 92% compared to where we started.”

Just like testing a field-based crop to see if it needs more water or nitrogen, cultured cells have to be monitored in real time to make sure they’re developing in line with expectations. Beyond just maintaining the growth and health of the tissue, this can be used to differentiate it proactively, producing fat or vascular tissue where it would likely be in a real cut of meat. The plan is to build a one-of-a-kind database for cultured meat, from which can be trained or deployed numerous AI agents that specialize in lamb, pork, or even different breeds like Wagyu or Angus beef.

All this is being demonstrated right now at a small scale, but the team has planned for scaling up by going from large to small rather than vice versa. “The design for the bioreactor is for the large scale, and the microscale system has been deliberately designed and purposely built to be a model of that system, recreating it down to a molecular scale with microfluidics and bioelectronic monitoring,” Mishra said.

In other words, if they can do it at the bench-top scale they’re currently prototyping in, they should be able to do it at a much greater scale. And it’s the larger bioreactors, which they call Renaissance Farm, that they plan to make available to meat producers as a more or less turnkey process.

Meat is a global industry, but not all countries and regions have the space, resources or infrastructure to support it. Yet every country consumes it — which means many must import meat at great cost and expense. What if a country rich in minerals or oil but not in pasture could produce its own meat with its own resources? That’s what Animal Alternative wants to enable.

“Our goal is to provide a viable alternative to the largest commercial factory farms,” said Beurrier. By their estimates, a 2,000-liter bioreactor should be able to make a million kilograms of meat per year for about the price of traditional farming, at only 5% of the land, water and emissions cost.

Animal Alternative would provide the hardware, and customers would need to buy new supplies of stem cells (which are taken without harming live animals, they noted) on a regular basis. The main costs at the production facility would be raw materials in the form of liquid growth media and growth hormones, both sourced from non-animal sources. Revenue sharing for sold product would be the main revenue source.

The decision not to fund its own network of factories and make their own product came down to the scale of the problem.

“We can’t do this on our own,” said Mishra. “This is a huge challenge to take on — we’re ambitious, but we have to work with the other great companies in the ecosystem.”

Partnering with the food industry giants in positions to supercharge this process is the natural way forward if they want to achieve their goal of decarbonizing and democratizing meat production as fast as possible. Once there’s a commercial-scale process for creating cultured meat, it should sell itself as a sustainable way to get a product indistinguishable from the original.

Just how indistinguishable? We’ll know for sure after their first tasting coming up soon.