Mynd, a company that aims to make it easier for people to buy and manage single-family rental properties, announced today it has raised $57.3 million in funding from QED Investors.

The financing values the Oakland, California-based company at $807 million, and brings the company’s total raised to $174.9 million since its 2016 inception. Invesco Real Estate led its previous round, a $40 million raise, and committed $5 billion to purchase and rent 20,000 single-family homes through Mynd over the next three years.

“We don’t outsource to partners. We do that all in-house,” Brien told TechCrunch. “We remove the geographical barriers to real estate investment, making it possible to invest in 25 cities from anywhere in the country — all from the comfort of home through our desktop interface and/or mobile apps.”

Currently, Mynd manages over 9,000 rental units in 25 markets across the country. The startup plans to expand to 15 additional markets over the next three years including, Indianapolis, Indiana and Memphis, Tennessee.

Mynd’s tech product is complemented by “boots on the ground” people in local markets, improving the speed and clarity of communications that the company can provide to Mynd residents, Brien said.

“Plus it provides total visibility and transparency for our owners around the health of their investments,” he said “Unlike other companies we have our own purpose-built system called OTTO. It’s almost like a ‘Snowflake meets Zendesk’ — but custom-built for real estate investing and property management.” 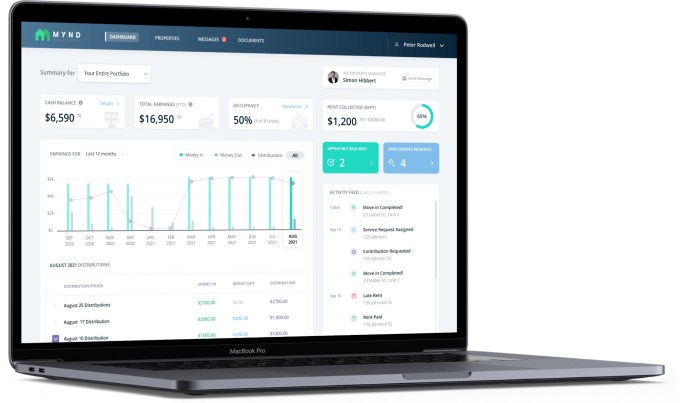 Last year, Mynd added 1,846 homes to the platform. This year, it’s on track to add roughly 8,500 across both retail and institutional — enough to nearly double the total homes managed by Mynd year over year, according to Brien. Invesco is its largest institutional client. On the retail side of its business, it has roughly 4,000 investors using Mynd.

“We believe that investing in the single-family residential asset class is the best path for building long-term, generational wealth,” he told TechCrunch. “Mynd is committed to democratizing real estate — making it accessible to a whole new crop of investors who were previously too intimidated and/or were constrained by geography.”

The pandemic underscored the urgency of what the company was building, he said, as people sought more space to live and work. Renting also became more common as more people wanted increased flexibility.

Mynd plans to use its new capital to continue upgrading its digital platform, which it says is powered by “an extensive proprietary data set.” It also plans to enhance its automated workflow engine, underwriting, mobile applications and omnichannel communications. The startup also plans to keep hiring and expanding into new markets.

QED partner Chuckie Reddy said the Mynd team was “one of the best” his firm had seen in the single-family rental market with a “purpose-built” tech stack designed specifically for such properties.

“They have a customized offering that is superior to anything else on the market today,” he said.

Generally, QED believes the single-family rental asset class is one of the fastest-growing in the country, “because of how big the housing market is, the need and desire for the product and the tremendous amount of capital formation we have seen since the last financial crisis,” according to Reddy.

“There is a shortage of quality, affordable single-family rental housing, and Mynd has technology to manage this asset class,” he said.

QED Investors closes on $1.05B across two funds to invest in fintech companies globally