When you’re hot, you’re hot. And 1047 Games is making the most of the heat generated by Splitgate, its first game and now a breakout success. After working on a shoestring for years, the team has since May raised three rounds, the latest for a massive $100 million.

Co-founder and CEO Ian Proulx credited a dedicated community and, as he described it, “taking a Silicon Valley approach to running a game business.”

At the time 1047 Games was founded, about five years ago, free to play (F2P) PC games were a niche genre. While games like World of Tanks and Warframe were seeing success, and of course many mobile games relying on in-app purchases, Fortnite had yet to show the industry that F2P could be so ludicrously profitable.

“Five years ago it was very hit-driven: You spend years developing a product, put all this money into hyping the launch and then hope it’s a success,” Proulx explained. “Our process was, there’s no way we can take that risk — if we spent our entire budget and got it wrong, we’re out of business. So we thought, let’s do a soft launch, put it out there and see what happens, learn, listen, look at the data. Why would I spend money marketing a product that I have no idea about whether it will be a success? If we wanted to spend money, and we didn’t have a lot, I’d rather spend it on a product that has great metrics and KPIs.”

If you’re not familiar with it, Splitgate is a multiplayer online competitive shooter with a lot of DNA from the old-school arena shooters like Quake 3, Unreal Tournament and Halo. Those games are frenetic enough, but Splitgate adds the ability to bend space with portals, like the eponymous Portal, adding a truly ridiculous amount of mobility to the action. 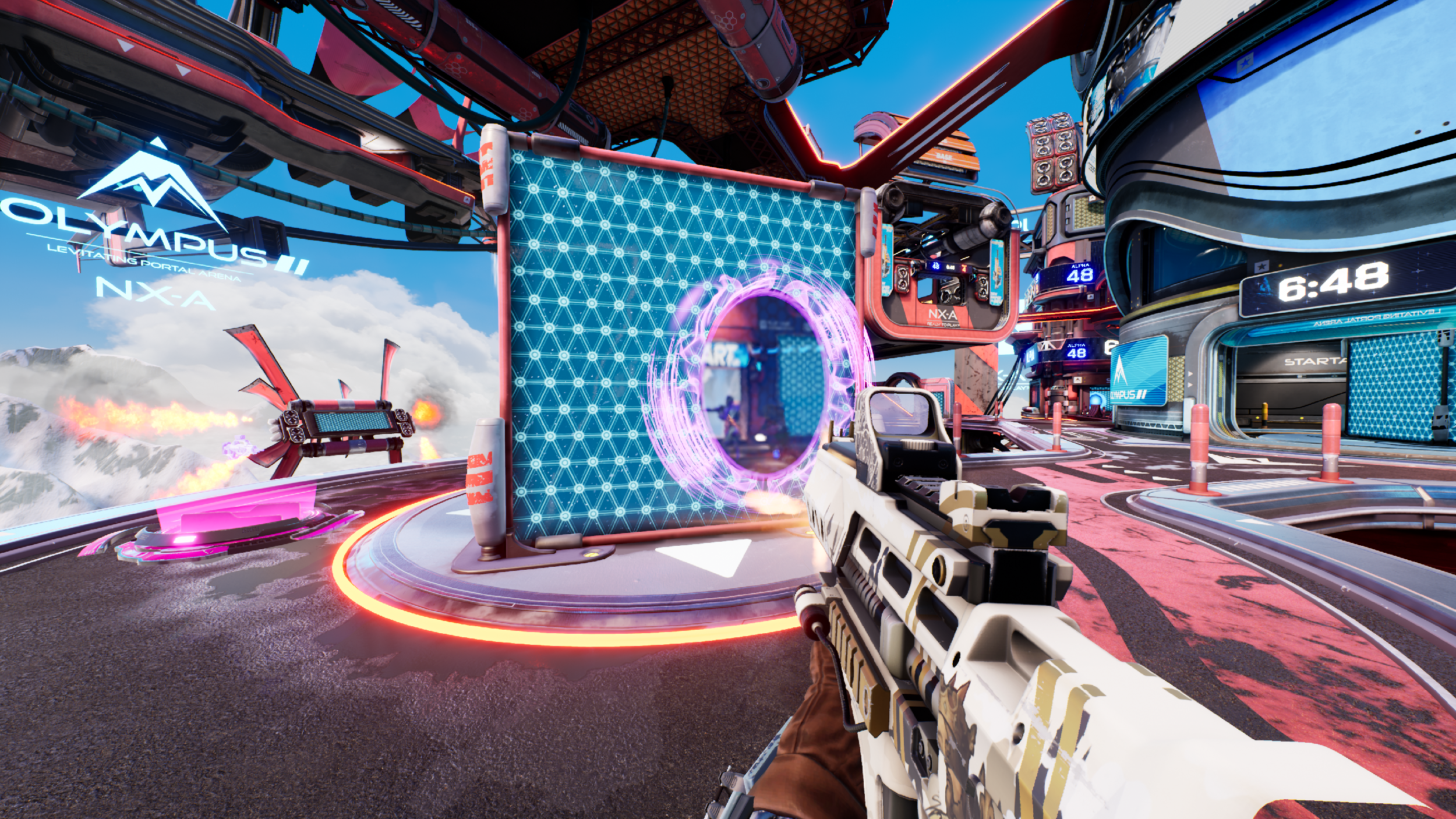 Proulx said investors shut the door on him repeatedly because they didn’t see Splitgate competing in any of the popular genres, battle royales and hero shooters, for instance. But he felt confident that this update to a familiar formula would be a success partly because the demand was there, just sleeping. “People grew up playing these games, and the reason [the market] is dead is not because they stopped loving them,” he said. “No one has moved the needle because there hasn’t been a lot of innovation, and there hasn’t been something that’s accessible to the masses. Quake Arena is great, but it’s extremely difficult. No 12-year-old Fortnite kid is gonna play it. We really do fill this void.”

While gameplay-wise Splitgate is most obviously similar to classic shooters, Proulx said a better comparison would be Rocket League, another huge success story in gaming that took a great concept and provided it as cheaply as possible, making money off cosmetic items and other totally optional perks.

“You can just have fun, turn your brain off and play, but there’s this limitless skill ceiling,” he explained.

It didn’t spring fully formed from 1047 in 2019, though. The team put out the gaming equivalent of a minimum viable product. “It was fun, and the basics were there,” he said, “but we learned there’s way more to running a business and free-to-play than just having a fun game.”

The danger for any game is simply that people stop playing, so the team focused on retention and on listening to feedback from the community to make Splitgate a “forever game” that can go years, with “seasons,” new features and maps, and so on.

The original MVP release saw some traction, around 600,000 downloads in its first month, but the big multiplatform relaunch — still as an “open beta” — this summer made a huge splash, pulling in more than 10 million in July.

Suddenly the tables had turned and 1047 was holding, as Proulx put it, “lightning in a bottle.”

“Our first round six months ago was extremely difficult. We talked to every investor on the planet and they all said no,” he recalled. But the hard work paid off: “We got lucky and ended up with the perfect partners — I can’t stress enough how supportive our investors have been.”

The next round (with Human Capital, just as Splitgate was taking off, went from phone call to funding over a weekend. This third round, with 1047 picking and choosing, was led by Lightspeed Venture Partners with participation from “Insight Partners, Anthos Capital, and earlier seed round investors Galaxy Interactive, VGames, Human Capital, Lakestar, DraperDragon, and Draper University” (from the press release).

One wonders what a team of fewer than 10 people could possibly do with $100 million ($116 million if you count the two previous rounds). But the bet investors are making is not that 1047 is going to suddenly make Assassin’s Creed, but rather that they think 10 million (and rising) people playing a unique game is potentially a huge opportunity — if the developers have the chance to follow through. This post-hype period is the valley of death for many games, the developers starved for cash after streamers and curious casuals move on. But the funding means that, for 1047, it’s license to hire like mad and double down.

“The scope of what we can do is now through the roof,” said Proulx. “There’s so much we couldn’t think about because we were a tiny team with a tiny budget, but now everything is on the table. We’re focusing on the long term — I look at the game as being 25% done. We don’t need to be Fortnite tomorrow, but now it really is about building the next Riot Games, the next big games business.”

In the meantime, Splitgate itself is still on the road to 1.0 and Proulx says the team can now truly focus on making it the game they and the community have been shaping it to be for years. He noted that many players have stuck by the team for years and helped make the game what it is, and that their input is just as important now.

“We read everything, we’re listening — keep the feedback coming. We’re still operating like the indie team that had to stay close with our community. We’re still in that mindset,” Proulx said, “but now we just have a ridiculous amount of money.”