You won’t find the Facebook logo emblazoned on them or even its name in small print by the serial code. They aren’t “Facebook Stories” or “Ray-Ban’s Facebook Stories” or even “Ray-Ban Stories in collaboration with Facebook.” Unlike other Facebook-designed hardware like the Quest 2 or Portal, the Ray-Ban Stories feel more self-aware and restrained as though the company knew exactly what use cases they needed to hit, and stopped themselves from trying to do much more than that.

The glasses made in partnership with eyewear giant EssilorLuxottica are certainly the most basic device Facebook has shipped. They only do a few things: You can take photos and videos; you can take phone calls; and you can listen to music. That’s it. But bringing audio into the mix via near-ear speakers embedded in the arms of the frames makes these a much more realized device than Snap’s Spectacles that shipped five years ago.

Let’s dig a bit into what this device does and how it feels to use it in daily life.

One thing to note about the $299 Ray-Ban Stories is that they can be worn pretty inconspicuously. People are probably more likely to notice the cameras than their slightly inflated dimensions. That’s already a revolutionary advance, which pushes these past the level of “toy,” which Spectacles never really seemed to eclipse. The Ray-Ban partnership was particularly savvy given the thicker-than-average frames on their standard Wayfarer design.

What onlookers are more likely to notice is you tapping the frame of your glasses to control them. Pressing the button on the right arm will take a 30-second video, a long-press will snap a photo. You can also use the voice command, “Hey Facebook, take a video” and do the same for photos. (For the record, I’m not sure whether this is a sentence I’d feel great about hearing a stranger nearby me in public say.) A small LED light sparks up when the camera is capturing footage though it’s a pretty low-key indicator. 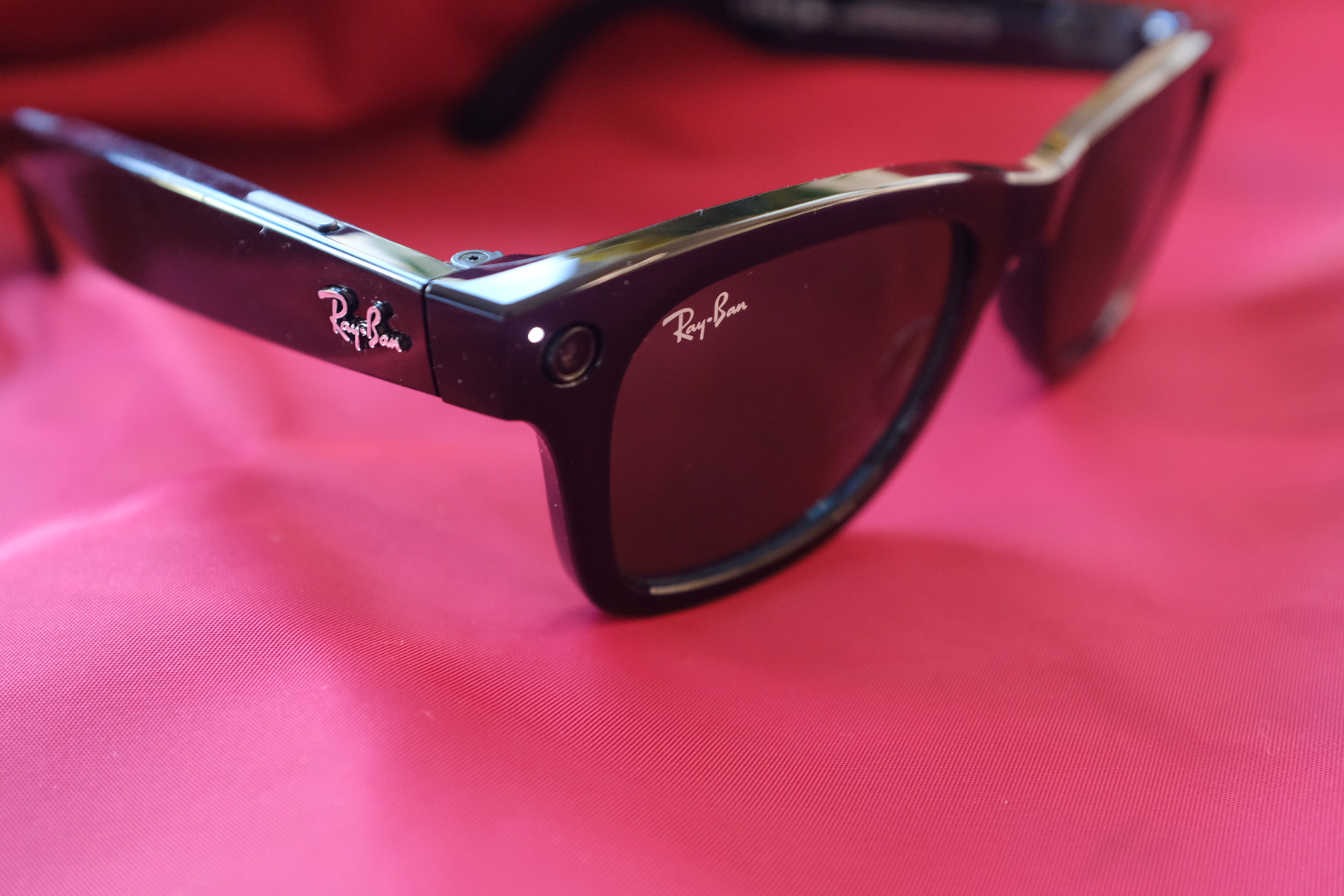 The photo and video quality of the glasses is pretty middling, but plenty of forgiveness can be levied given the size of the device. The twin 5 MP cameras can shoot 2592×1944 pixel photos and 1184×1184 pixel square format videos. The quality seems to be about on par with where smartphone cameras were about 10 years ago, so it’s clear there’s plenty of room for improvement. Post-processing on the phone during upload enhances the photos and hides some of their struggles with low lighting while making the photos pop a bit more with saturation.

The twin camera setup is used to add 3D effects to your photos, but at the moment the filters aren’t great and there’s honestly not much there. Hopefully, Facebook invests a bit more in the software over time but with fairly low-quality photos, I don’t completely see the reasoning in having two cameras to begin with.

Also worth noting is that using the glasses requires linking them to a new Facebook app called View, which is basically a simple media viewer app that gets around limitations in how media from external devices can be uploaded to your phone. This is where you can also make quick edits to your photos and videos before dumping them to your photo roll or sharing them to Facebook or Instagram. 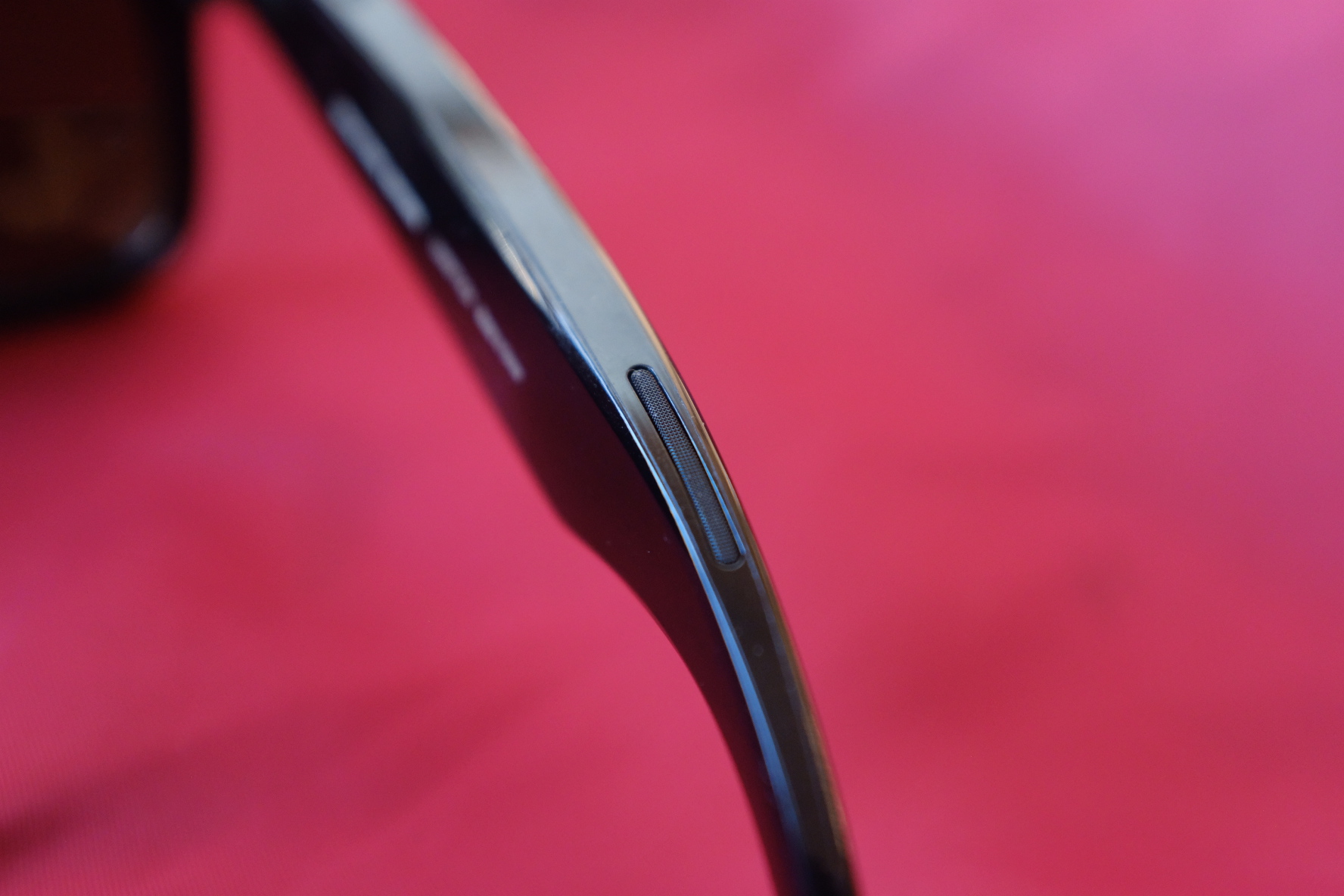 Audio is probably the most interesting bit of these glasses. The near-ear speakers will surprise you with their quality in quiet spaces and leave you dissatisfied once you find yourself in a noisier environment. Unfortunately for Facebook, most outdoor spaces are a bit louder and sunglasses are mostly being used outdoors. The audio will work in a pinch outdoors for listening to tunes, but I honestly can’t see them replacing my AirPods anytime soon. The audio is much better suited for low-fidelity activities like phone calls, but I also had some issues with the three-microphone array picking up too much background noise while I was walking outdoors.

Battery life is surprisingly solid, but they also have the benefit of a charging battery case, which is incidentally the best place to store them. The case is a little bulky but they also include a microfiber pouch to protect the lenses. Facebook says you can get six hours of straight audio and “all-day” usage otherwise.

One of their weirder quirks is their lack of waterproofing or even splash-proofing, something that doesn’t seem like a great quality for a pair of sunglasses. It’s just one more thing indicating that while the thicker frame aesthetic of sunglasses makes more sense for a smart-glasses design, this product really thrives more indoors. 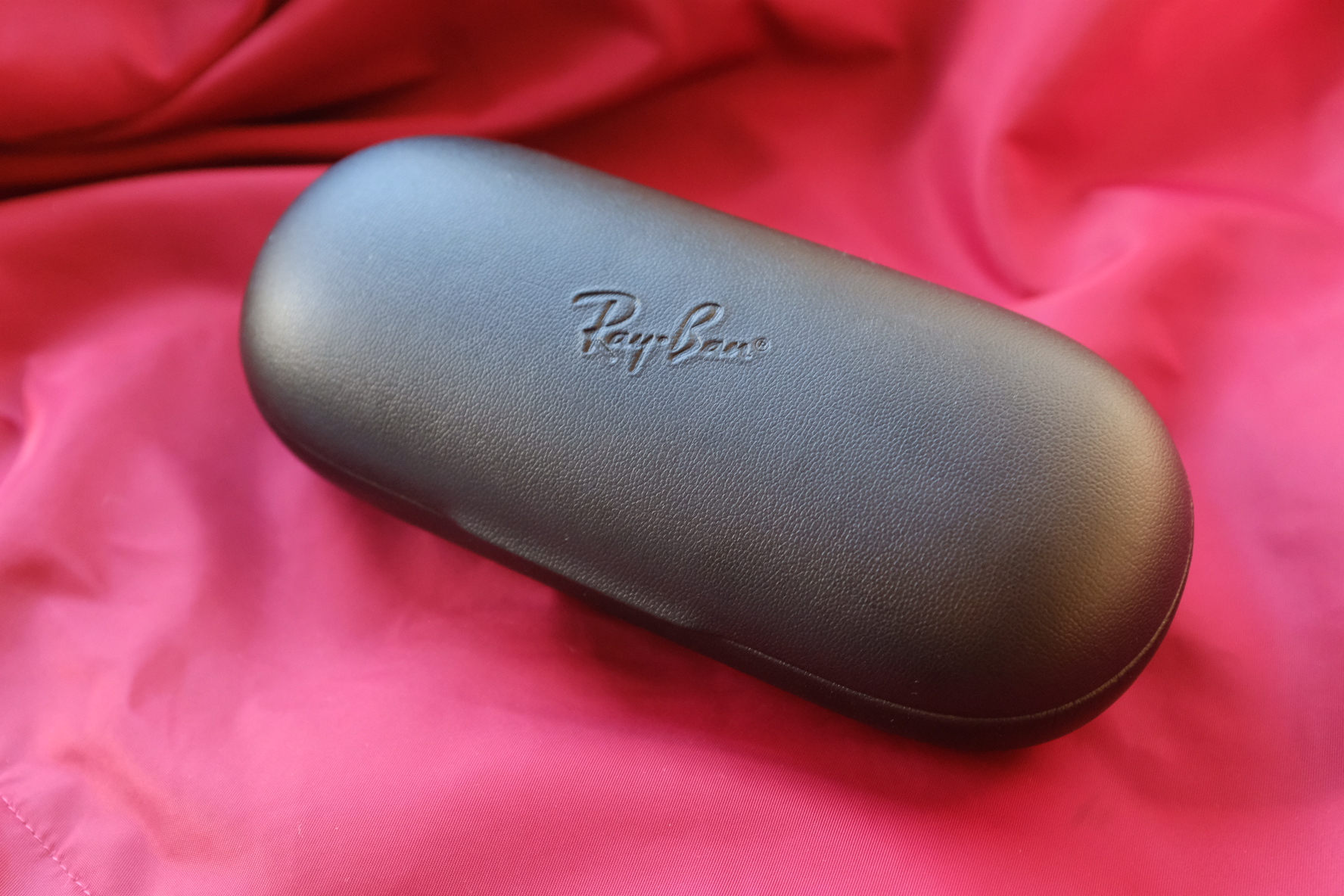 This isn’t Facebook’s first rodeo when it comes to hardware and you can see the company’s maturation.

They aren’t an AR/VR device, but you can also see generations of Oculus products in the Ray-Ban Stories’ design. On-ear audio born from the Oculus Go, a touchpad interface reminiscent of the Gear VR, simple and restrained audio controls first launched on the Quest. The hardware is a distillation of features and lessons learned from selling VR to a generally indifferent public that has seemed to warm up to it a bit over the years.

Meanwhile, you can also see years of Facebook screwing up its messaging and torching its brand name in the process, making itself the boogeyman of both political parties, courting enemies in the press and earning an outsized amount of distrust from the average internet user, something that probably led to these carrying so little Facebook branding. The Ray-Ban Stories will certainly have their detractors, but Facebook choosing to be conservative in their functionality and not toss in too many future-flung passive sensors will likely do them a favor. The Facebook View app is bare bones and Facebook details that photos and videos captured using the Stories won’t be used to serve ads. All that said, while we’ve certainly come a long way since the Google Glass debut in 2013, face-mounted cameras still feel icky when it comes to privacy in public and this device will undoubtedly reignite that conversation in a major way. 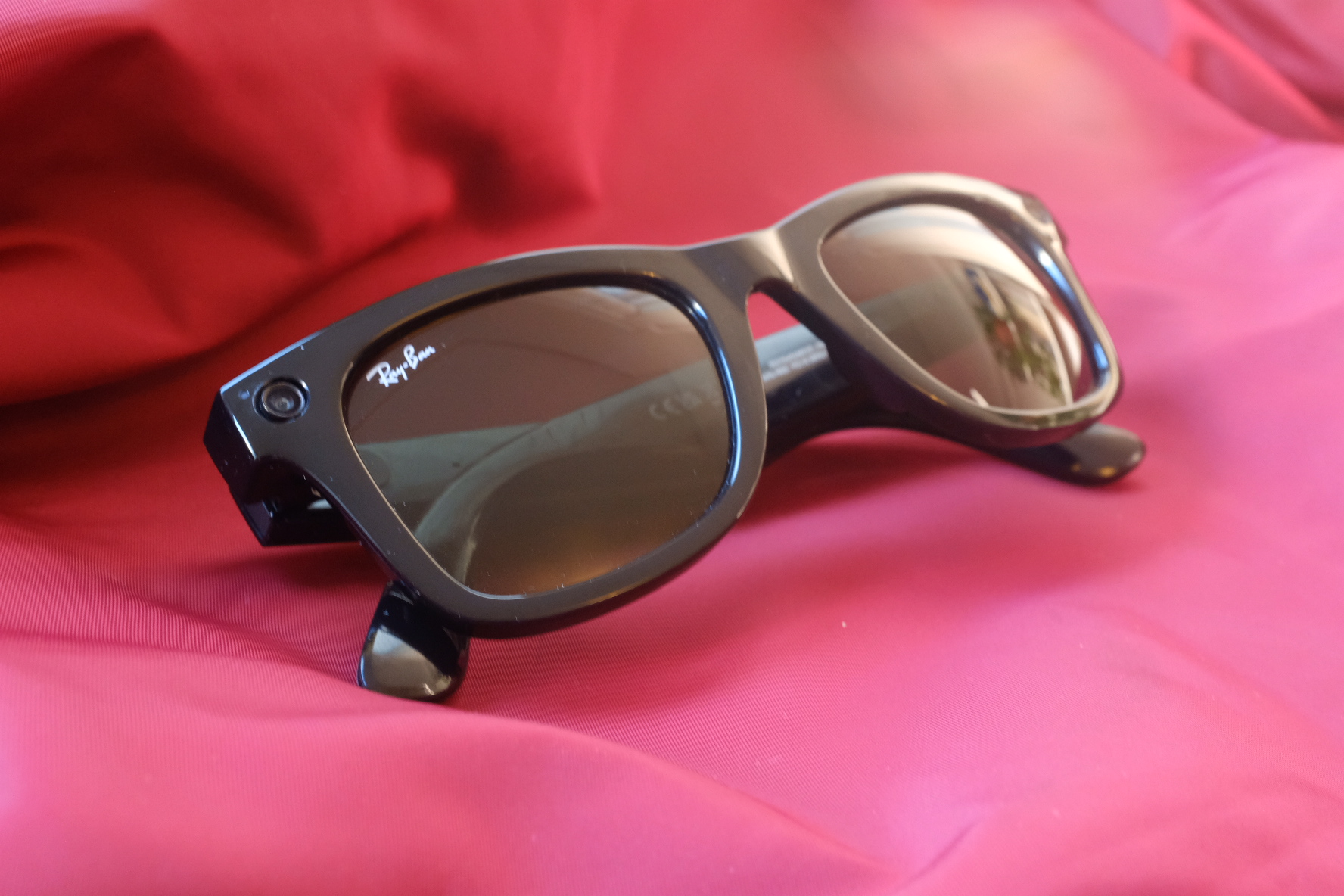 Baggage aside, my broadest takeaway is that the Ray-Ban Stories feel like a very important product — one that actually sells the idea of face-worn wearables.

The glasses are smartly designed and can be worn discreetly. That said, it’s clear Facebook made plenty of sacrifices to achieve such an aggressive form factor; the glasses honestly don’t do anything particularly well — photo and video quality is pretty lackluster, the in-frame speakers perform poorly outdoors and calls aren’t the most pleasant experience. For $299, that might make the first-generation a tough sell for some. But all that said, I think Facebook mostly made the right compromises for a product that they’ve repeatedly indicated is meant to be a stepping stone on the road toward an augmented reality future.