Apple Music announced today that it’s created a process to properly identify and compensate all of the individual creators involved in making a DJ mix. Using technology from the audio-recognition app Shazam, which Apple acquired in 2018 for $400 million, Apple Music is working with major and independent labels to devise a fair way to divide streaming royalties among DJs, labels and artists who appear in the mixes. This is intended to help DJ mixes retain long-term monetary value for all creators involved, making sure that musicians get paid for their work even when other artists iterate on it. And, as one of Apple’s first major integrations of Shazam’s technology, it appears that the company saw value in it.

Historically, it’s been difficult for DJs to stream mixes online, since livestreaming platforms like YouTube or Twitch might flag the use of other artists’ songs as copyright infringement. Artists are entitled to royalties when their song is played by a DJ during a live set, but dance music further complicates this, since small samples from various songs can be edited and mixed together into something unrecognizable.

Apple Music already hosts thousands of mixes, including sets from Tomorrowland’s digital festivals from 2020 and 2021, but only now is it formally announcing the tech that enables it to do this, even though Billboard noted it in June. As part of this announcement, Studio K7!’s DJ Kicks archive of mixes will begin to roll out on the service, giving fans access to mixes that haven’t been on the market in over 15 years.

“Apple Music is the first platform that offers continuous mixes where there’s a fair fee involved for the artists whose tracks are included in the mixes and for the artist making those mixes. It’s a step in the right direction where everyone gets treated fairly,” DJ Charlotte de Witte said in a statement on behalf of Apple. “I’m beyond excited to have the chance to provide online mixes again.” 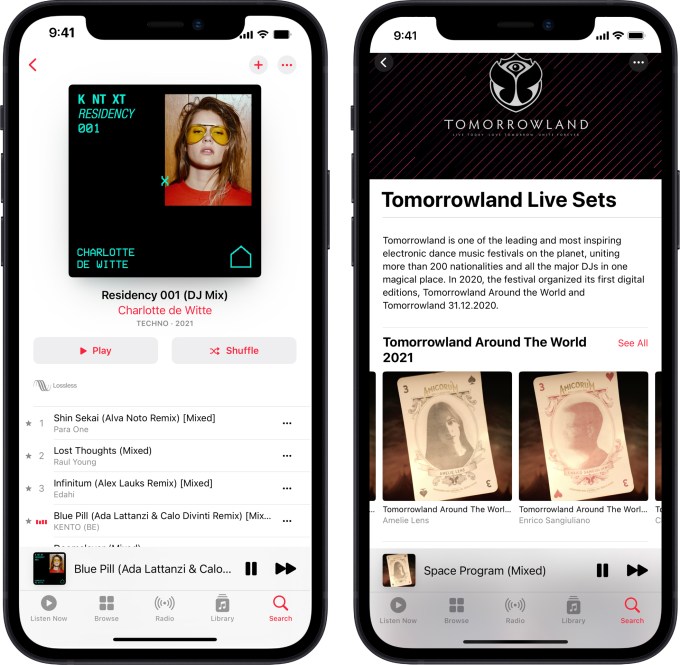 For dance music fans, the ability to stream DJ mixes is groundbreaking, and it can help Apple Music compete with Spotify, which leads the industry in paid subscribers as it surpasses Apple’s hold on podcasting. Even as Apple Music has introduced lossless audio, spatial audio and classical music acquisitions, the company hasn’t yet outpaced Spotify, though the addition of DJ mixes adds yet another unique music feature.

Still, Apple Music’s dive into the DJ royalties conundrum doesn’t necessarily address the broader crises at play among live musicians and DJs surviving through a pandemic.

Though platforms like Mixcloud allow DJs to stream sets and monetize using pre-licensed music, Apple Music’s DJ mixes will not include user-generated content. MIDiA Research, in partnership with Audible Magic, found that user-generated content (UGC) — online content that uses music, whether it’s a lipsync TikTok or a Soundcloud DJ mix — could be a music industry goldmine worth over $6 billion in the next two years. But Apple is not yet investing in UGC, as individuals cannot yet upload their personal mixes to stream on the platform like they might on Soundcloud. According to a Billboard report from June, Apple Music will only host mixes after the streamer has identified 70% of the combined tracks.

Apple Music didn’t respond to questions about how exactly royalties will be divided, but this is only a small step in reimagining how musicians will make a living in a digital landscape.

While these innovations help get artists compensated, streaming royalties only account for a small percentage of how musicians make money — Apple pays musicians one cent per stream, while competitors like Spotify pay only fractions of cents. This led the Union of Musicians and Allied Workers (UMAW) to launch a campaign in March called Justice at Spotify, which demands a one-cent-per-stream payout that matches Apple’s. But live events remain a musician’s bread and butter, especially given platforms’ paltry streaming payouts — of course, the pandemic hasn’t been conducive to touring. To add insult to injury, the Association for Electronic Music estimated in 2016 that dance music producers missed out on $120 million in royalties from their work being used without attribution in live performances.