A report on the future of solar energy from the Department of Energy paints a sunny picture, if you will, of the next three decades, at the end of which nearly half the country’s energy will be provided by the sun. But for that to happen, big pushes need to happen along four major lines: better photovoltaics, more energy storage, lower soft costs and putting about a million people to work.

Here’s what the report says needs to happen in each of these sectors in order to meet the ambitious goals it sets out.

The solar cells themselves will need to continue to improve in both cost and efficiency in order to achieve the kind of installation volumes hoped for by the DOE. For reference, 2020 saw 15 gigawatts worth of solar installed, the most ever — but we’re going to need to double that installation rate by 2025, then double it again by 2030.

If photovoltaics don’t improve in efficiency, that means these already ambitious numbers need to go even higher to account for that. And if they stay at today’s prices, the costs will be too high to achieve those volumes as well. 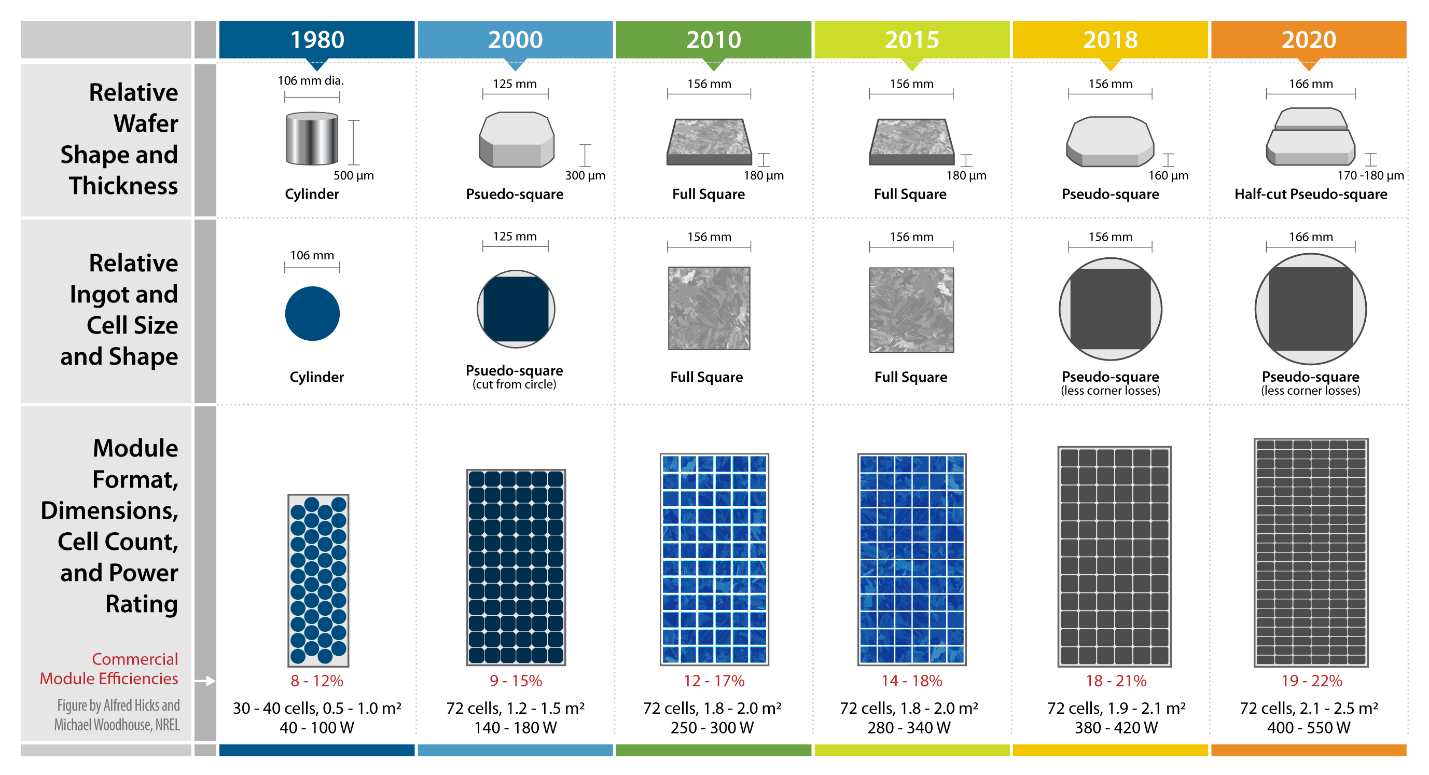 Photovoltaics have come a long way, but they also have a long way to go. Image Credits: US Dept. of Energy

Fortunately efficiency is going up and cost is going down already. But it’s not like that just happens naturally. Companies and researchers across the globe have spent millions on new manufacturing processes, new materials and other improvements, incremental individually but which add up over time. This basic research and advancement of the science and methods around solar must continue at or beyond the pace that they have over the last two decades.

The DOE suggests that research along the lines of making more exotic PVs cheaper, or stacking cells to minimize bandgap-related losses could be crucial. Flexible and tile- or shingle-like substrates or semi-transparent installations that pass light through to crops or building interiors may also figure. Altogether the plan calls for a reduction of the overall cost to drop by almost half from $1.30/watt today on average to $0.70 by 2030 and more after that.

Solar concentrators get their own heading in the report, and many companies are looking into these to replace industrial processes. These will not likely be used to support the grid at large but will nevertheless replace many fossil fuel based processes.

An unavoidable consequence of getting your energy from the sun is that at night you must rely on stored energy in some form or another, originally nuclear or coal but increasingly a form of storage that collects excess power collected during the daytime. With more of peak usage being covered by renewables, cities can safely transition away from carbon-based energy sources.

While we often think of energy storage in terms of batteries, and certainly they will be present, the amount of energy that must be stored rules out something like lithium-ion batteries as the primary storage mechanism. Instead, the excess energy can be put toward powering energy-hungry renewable fuel production, like hydrogen fuel cells. This fuel can then be used to generate power when solar can’t meet demand. 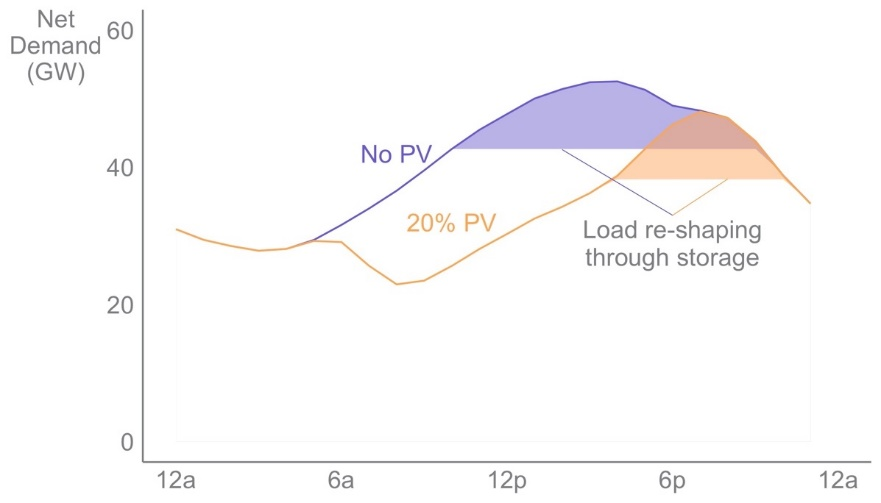 The diagram shows how demand would normally go (purple) then how it would go with solar (orange) and how energy storage could mitigate that load (solid colors). Image Credits: US Dept. of Energy

That’s just the “off the top of the head” answer. As the report states: “Thermal, chemical, and mechanical storage technologies are under various stages of development, including pumped thermal storage, liquid air energy storage, novel gravity-based technologies, and geological hydrogen storage.”

No doubt there will be a variety of new and old technologies working to provide the various levels of energy redundancy and storage duration needs of the country. These will go a long way towards making solar and other renewable energy sources capable of being relied on for a greater proportion of demand.

If we’re going to double and redouble the rate of solar cell deployment, the costs have to come down not just for the cells themselves, but the whole end-to-end process: assessment, accounting, labor, and of course the profit due to the companies that will be doing the actual work.

Lowering non-hardware costs is already the goal of many startups, like Aurora Solar, which clearly saw the writing on the wall and started making it as easy as possible to plan, visualize, and sell solar installations entirely online.

Right now the all-in cost of a solar roof might be twice the cost of the hardware or more. There are several contributors to this, from financing to regulations to markets, and each has its own intricacies beyond the scope of this article. Suffice it to say that if you can shave 1% off the cost of a solar installation by streamlining the time or cost involved in any of these areas, there will be more than enough volume to turn that one point into a major sum. It will take the combined efforts of many organizational and commercial minds to make this happen, just as it takes the efforts of many scientific ones to improve PVs.

Last but certainly not least, someone has to actually do all this work. That means a whole lot of labor — several times the quarter million people currently estimated to be attached to the solar industry in the country today. 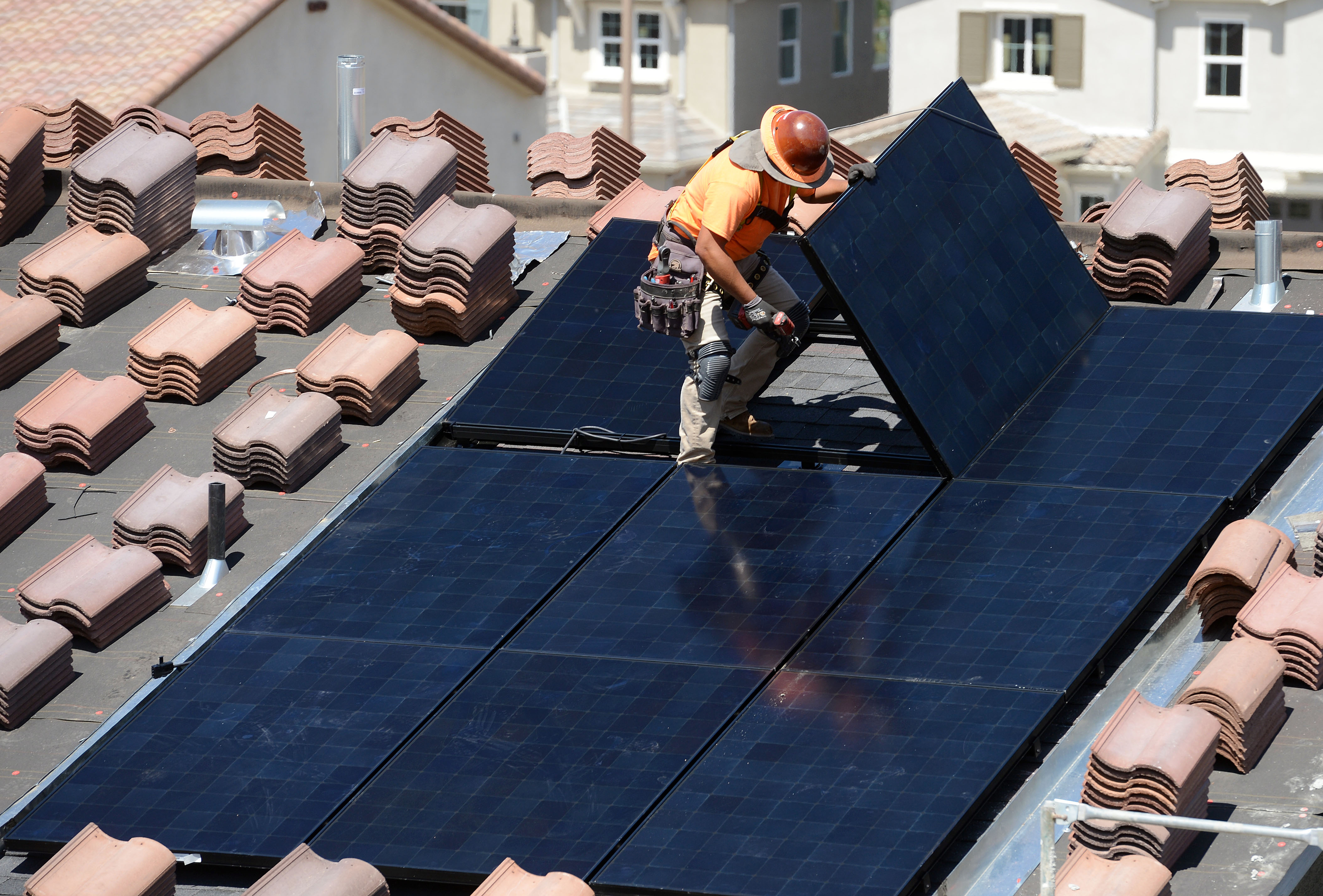 Jobs in this sector will run the gamut, from skilled workers with construction experience to energy professionals who’ve managed grids to public-private partnership wizards who connect commerce to the government’s inevitable top-down incentives. The additional half a million to a million jobs will almost certainly comprise many brand new companies and sub-industries, but the general breakdown so far has been about 65% installation and project development, 25% sales and manufacturing, and the rest in miscellaneous roles.

It is worth noting, however, that energy concerns currently clinging with white knuckles to aging oil and coal infrastructure will need to do right by the tens of thousands they still employ, and the renewable energy sector is a perfect transition space. “Throughout the transition, certain fossil fuel companies may come under increasing financial distress,” the report reads, which is something of an understatement. The authors strongly suggest funding transition programs that cover training, relocation, and guarantees of existing financial benefits like pensions.

The report points out that the solar industry is overwhelmingly white and male, like a few others we could name, so it is probably worth putting in work on that front if the million hires are to be at all equitable.

You can browse the full study here.