Mayors have the toughest job in the world, and leading a city is only getting harder. Even as populations swell in urban cores across the world, climate change is constraining the geographies where that growth can happen. Coastal communities that are popular with residents are also taking a gamble when it comes to rising sea levels. How do you trade off a need for growth with the requirement for protecting residents from disaster?

In most cases, the pendulum is fully tilted toward growth. Coastal towns continue to allow widespread sprawl and development, chasing ever more property taxes and residents even as sea levels get ever more uncomfortably high. It’s a recipe for disaster — and one that many cities have chosen to bake anyway.

Forerunner wants that pendulum to swing the other way. Its platform allows city planners and building managers to survey, investigate and enforce stricter building codes and land use standards with a focus on mitigating future flood damage. It’s particularly focused on American cities with heavy usage of the federal flood insurance program, and Forerunner helps cities maximize their adherence to that program’s byzantine rules. 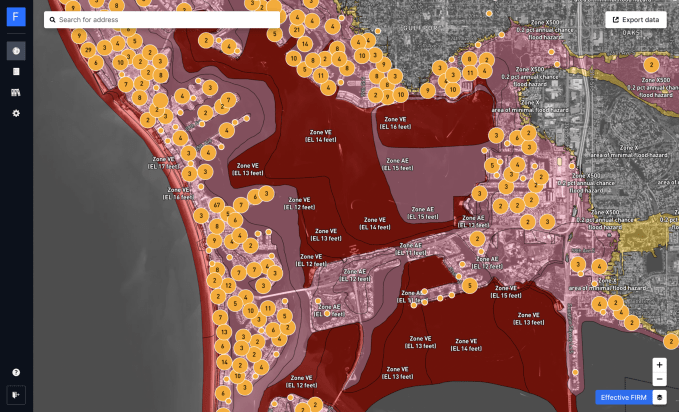 The company pulls in data from FEMA and other sources to determine a property’s mandatory lowest floor height requirement, and whether the property conforms to that rule. It also tracks flood zone boundaries and helps with the administrative overhead of processing federal flood insurance documentation, such as creating and managing elevation certificates.

Co-founders JT White and Susanna Pho have been friends for years and worked at the MIT Media Lab before eventually coming together in early 2019 to build out this floodplain management product. “It cannot be underscored enough that a lot of communities just don’t follow [federal flood] regulations,” Pho said. “They will revert their ordinances from something more strict … since they can’t do a lot of day-to-day compliance.”

Coastal cities devastated by floods are protected by federal flood insurance, but that often creates a moral hazard: since damage is paid for, there isn’t much incentive to avoid it in the first place. The federal government is attempting to tighten those standards, and there is also a sense among a new generation of city planners and municipal leaders that the build-devastation-rebuild model of many cities needs to stop, given climate change. After flooding, “we want to see communities rebuild to higher standards,” White said. “The sort of cycle of rebuilding and doing the same thing over and over again is infuriating to us.”

Transitioning to a new model isn’t easy of course. “There are a lot of hard decisions that these communities must make,” he said, but “our software makes it a bit easier to do these things.” So far, the company has gotten early traction, with 33 communities currently using Forerunner, according to the founders.

Although it has customer clusters in Louisiana and northern New Jersey, the company’s largest customer is Harris County, which includes much of the Houston, Texas metro area. The county could potentially save $5 million on their flood insurance premiums with better adherence to federal standards, according to White. “One of the benefits of our product is that we can help you protect and increase this immediate discount to every flood insurance policyholder in your community starting next year,” he said. Ultimately though, FEMA focuses on disincentives rather than incentives. “The biggest stick that FEMA has is that it can suspend communities from the flood insurance program,” he noted.

The company raised an early seed round in 2019, and has been focused on building up the platform’s capabilities and getting the sales flywheel spinning — which can be a tough order in the govtech space.

Even as demand intensifies for more housing and growth, climate change is simultaneously placing its own demands on cities. Mayors and city leaders are increasingly going to have to transition from the growth models of the past to the resilient models of the future.

The most disastrous sales cycle in the world