Dukaan, a one-year-old Bangalore-based startup that enables merchants to set up online stores and sell products digitally, said on Monday it has raised $11 million in a new financing round as it looks to broaden its offerings and deepen footprints in the South Asian market.

The new financing round, a pre-Series A, was led by New York-headquartered 640 Oxford Ventures. Venture Catalyst, HOF Capital, Old Well Ventures, LetsVenture, 9Unicorns, and existing investors including Lightspeed Partners and Snow Leopard Ventures also participated in the new round.

Ritesh Agarwal of Oyo and Carl Pei of Nothing also invested in the new round, said the startup, which has raised over $17 million to date and is now valued at $71 million.

Dukaan provides individuals with no-code tools to set up digital presence. The process is straightforward and quick. “First you verify your email address or phone number and then you write your business or store name. And that’s it. Your digital store has been created,” said Suumit Shah, co-founder and chief executive of Dukaan, in an interview with TechCrunch.

Once they have set up the store, they can manually add the inventory they have and start selling to their customers. For merchants operating in the grocery space, Dukaan also allows them to take pictures of their inventory and automatically logs them into the digital store. The startup also helps these merchants accept digital payments.

Dukaan, which is Hindi for a shop, is largely tapping into India’s massive neighborhood market. More than 100 million Indians work in what is locally more popular as kiranas. These stores, in many cases, have been operational for decades. 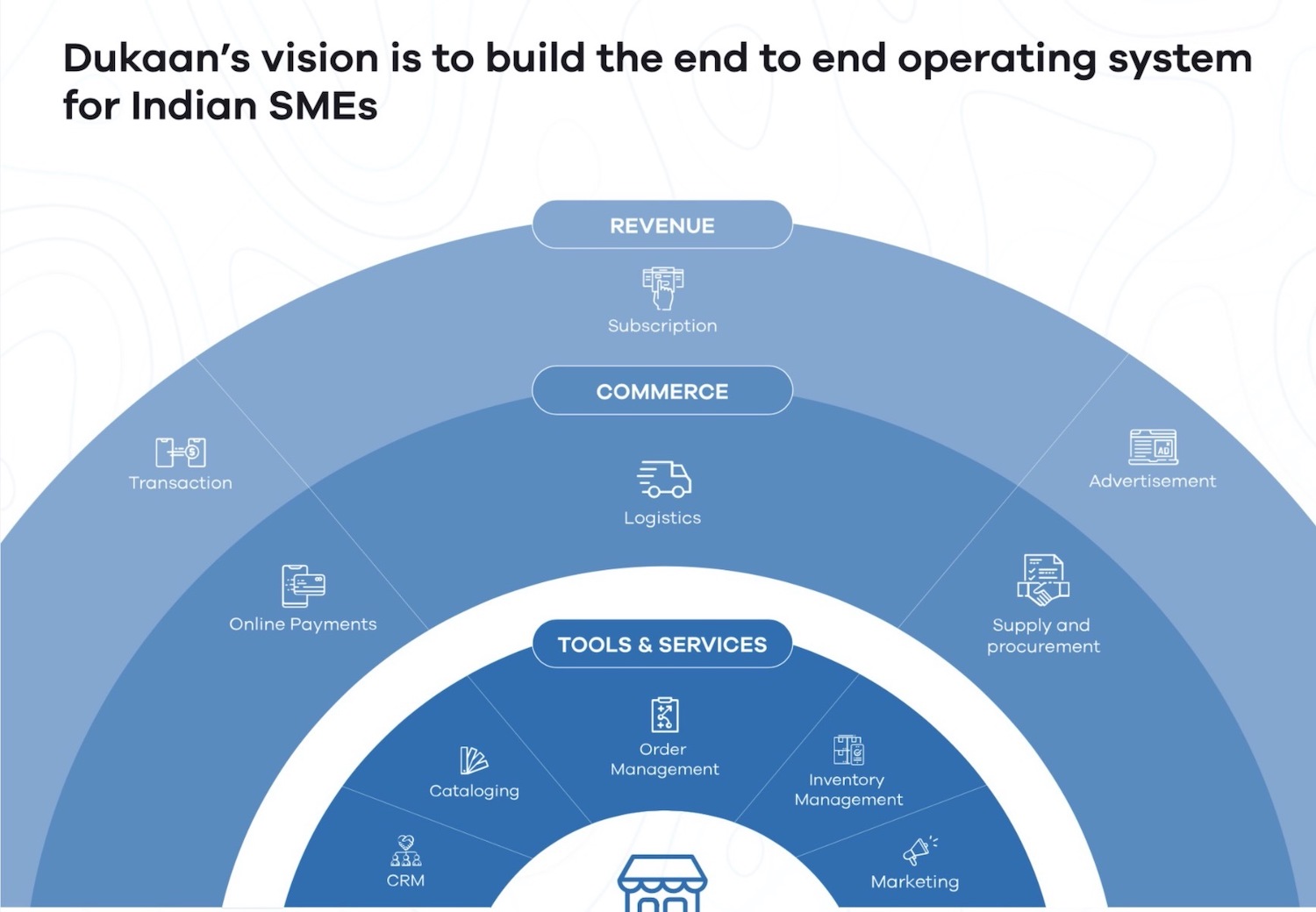 A slide from Dukaan’s deck to investors, shared by one with TechCrunch. The startup is already engaging with several investors to raise its Series A round. Image Credits: Dukaan

In recent years, scores of firms including Reliance, Amazon and Flipkart have attempted to disrupt their business — to little to no success. In fact, most of these firms are now increasingly exploring ways to engage with these merchants.

But the way Dukaan has been developed, it can also be used by restaurants trying to get online, or teachers who are looking to set up digital presence. The startup said it has facilitated over 1.5 million transactions to date.

“All these digital stores, by default, get a mydukaan.io website, which they distribute among their customers and friends. This has helped our startup gain more recognition in the market,” said Shah.

The startup’s eponymous offering charges individuals or businesses as little as 6,999 Indian rupees, or $95, per year for its services. It also offers some premium plans such as Dukaan Infinity —  which helps businesses conduct marketing on Facebook and Google and helps them rank better on Google search — and Dukaan Enterprise for big businesses.

Retail chain Big Bazaar and German personal care brand Nivea are customers of Dukaan Enterprise. “In the case of Nivea, they have scores of distributors across the country. Now they are getting their distributors to sell the vast majority of their inventories to stores through Dukaan to bring more efficiency to the system,” he said.

“There is a massive white space opportunity to service the commerce needs of India’s 100 million+ small businesses and the Dukaan team with its strong product orientation and deep knowledge of the small business user is ideally positioned to lead the creation of new categories of commerce businesses in India,” said Akshay Bhushan, partner at Lightspeed, in a statement.

Dukaan plans to deploy the fresh funds to build its own payments gateway and also develop plugins to integrate with delivery firms and their aggregators, said Shah. “So far the story has been about helping people with creating their stores. Now we are working on how to help these people with more things,” he said.

“We are aiming to have 2 million to 3 million monthly transacting stores on the platform in the next 12 months and also reach $10 million in annual recurring revenue in that timeframe,” he said.