AxleHire, which is known for parcel delivery and restaurant meal kit delivery like Blue Apron and HelloFresh, plans to deploy more than 100 Tortoise robots across the country. During URB-E’s summer deployment with AxleHire in NYC, it deployed 10 vehicles moving 100 containers per week. Now it will deploy 50 URB-E vehicles moving anywhere from 300 to 500 containers per week in NYC, LA and San Francisco, as well as other launch cities. The company, which raised a $20 million round in April, didn’t specify every city it would be entering with these new programs, but Tortoise and URB-E said we can look to the cities AxleHire already operates in: Chicago, Dallas, Houston, Los Angeles, San Diego, San Francisco, New York, Phoenix, Seattle and Portland, Oregon.

AxleHire’s style is to establish delivery hubs in or near dense metro areas, which makes for easier trips and less miles traveled in total. The partnerships with Tortoise and URB-E are a part of AxleHire’s mission to create more sustainable and cheaper last-mile delivery. The company says its partnerships with the two startups have also lowered its emissions by 95%. AxleHire is providing an example of one company trialing two very different greener and tech-focused forms of transporting goods, so it will likely serve as an interesting case study for other last-mile logistics providers. 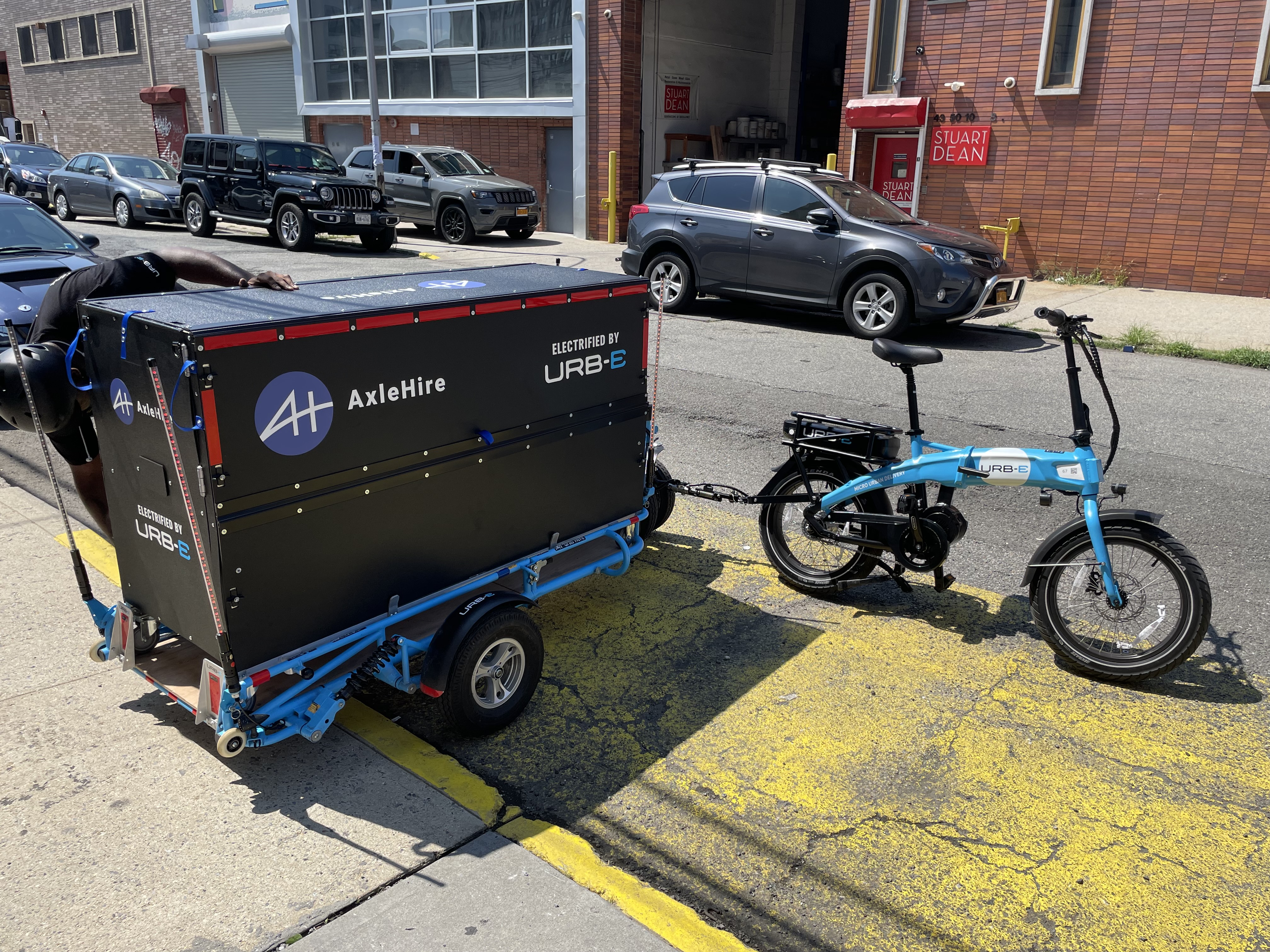 In New York, AxleHire and URB-E have been working together on a microcontainer delivery system between Brooklyn and Manhattan. URB-E’s vehicles are specifically designed to be able to ride in the bike lanes, despite their ability to haul over 800 pounds. AxleHire says its pilot with URB-E resulted in a six times reduction in traffic and a model that is three times cheaper than EV delivery vans, largely based on the avoidance of parking tickets.

Over the past year in Los Angeles, AxleHire stationed Tortoise’s electric, 4-mph remote-piloted carts, which carried up to 120 pounds of goods, in its delivery microhubs in cities, allowing the little bots with friendly smiley faces to go back and forth, making about 15 deliveries per day within a three-mile radius. In addition, AxleHire loaded a large truck with multiple packages and a Tortoise robot, which would then drive into a dense residential area. This truck would serve as a mobile delivery hub, doing its own deliveries while the bot goes back and forth delivering parcels and being reloaded all day long.

“It’s basically the hive model, where we’re augmenting the existing van or truck in terms of how many deliveries they could do in a two-hour stretch,” Dmitry Shevelenko, co-founder of Tortoise, told TechCrunch. “There’s communication happening with our subject confirming they’ll be home to receive it. If so, they get notified that the robot’s on the way when it’s about 10 minutes away, and then when it arrives, the customer will come out and get it from the containers in the robot.”

The Tortoise bots, which can ride on sidewalks or bike lanes, have both swappable batteries and can be plugged and charged, according to Shevelenko. On a single charge, they can get around 10 to 15 miles of range.

While Tortoise’s bots will be operated 100% remotely over the next year, remote positioning is not Tortoise’s end goal at all. Autonomy is the goal, and doing partnerships like this, as well as with shared e-scooter operators like Spin, allows Tortoise not only to get into markets that currently don’t have regulation for self-driving vehicles, but also to just get into the market now, rather than spending multiple years mapping it first. The only real infrastructure the bots need is 4G connectivity.

“The beauty is that we can ship the robot to a new location, and because we have the benefit of human judgment over every inch of the journey,” said Shevelenko, “we don’t need perfect routing or perfect mapping. We’re filling in the maps over time, and that gives us a big data advantage.”

By slowly collecting routing data over the course of the next year, Tortoise will be giving its system more data to learn on and create the most optimal route for the specific use case of low-speed and lightweight delivery vehicles. Shevelenko says the long-term vision of Tortoise is to have its tech on any light electric vehicle, whether it be a delivery robot, a scooter, a cleaning robot, security robot or construction robot. Delivery is a great place to start, given the massive demand in the COVID marketplace.

“The more vehicles we have with Tortoise eyes on them, the more data we’re collecting, which means we’re doing trips with higher autonomy and lower costs,” said Shevelenko.

Aside from allowing for max data collection, remote controlled delivery bots over the next year also give Tortoise the advantage of getting the community used to this new tech.

“We think the right way to enter a community is first to reassure people that this is safe and get them comfortable with it,” said Shevelenko. “Once it’s part of daily life, then slowly over time, we can turn on more autonomy, but there’s no need to rush into that right now. The practical reality is, everybody’s claiming they’re doing autonomy, but they aren’t. They always have a fallback like safety drivers or remote monitors. Nobody actually trusts their autonomy system, and so we’re kind of leaning into that and not trying to do something that is impossible.”