The feature, first revealed in February, will allow users to subscribe to accounts they like for a monthly subscription fee in exchange for exclusive content. For creators, Super Follows are another useful tool in the emerging patchwork of monetization options across social platforms.

Eligible accounts can set the price for Super Follow subscriptions, with the option of charging $2.99, $4.99 or $9.99 per month, prices fairly comparable to a paid newsletter. They can then choose to mark some tweets for subscribers only, while continuing to reach their unpaid follower base in regular tweets. 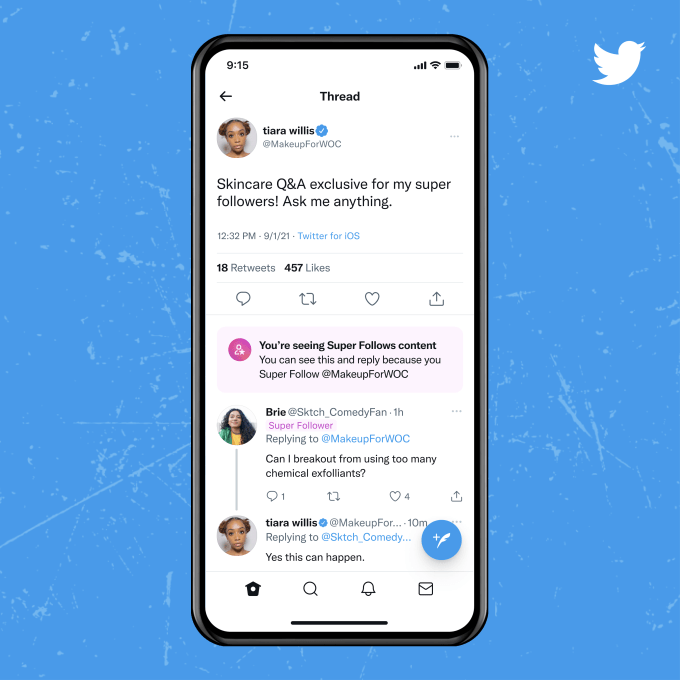 Paid subscribers will be marked with a special Super Follower badge, differentiating them from unpaid followers in the sea of tweets. The badge shows up in replies, elevating a follower’s ability to interact directly with accounts they opt to support. For accounts that have Super Follows turned on, the option will show up with a distinct button on the profile page.

Super Follows aren’t turned on for everyone. For now, the process remains application only, with a waitlist. The option lives in the Monetization options in the app’s sidebar, though users will need to be U.S.-based with 10K followers and at least 25 tweets within the last month to be eligible.

U.S. and Canada-based iOS Twitter users will be able to Super Follow some accounts starting today, with more users globally seeing the rollout in the coming weeks. On the creator side, Super Follows are only enabled in iOS for now, though support for Android and desktop are “coming soon.”

Twitter says that Super Follow income will be subject to the standard, though controversial, 30% in-app purchase fees collected by Apple or Google. Twitter will only take a 3% cut of earnings for up to the first $50,000 generated through Super Follows — a boon for smaller accounts getting off the ground or anyone who uses the paid Twitter feature as a way to supplement other creator income elsewhere. After an account hits the $50,000 earnings mark, Twitter will begin taking a 20% cut.

Super Follows aren’t Twitter’s first monetization experiment to make it out in the wild. In May, Twitter introduced Tip Jar, a way for accounts to receive one-time payments through integration with the Cash App and other payment platforms. The test is limited to a subset of eligible accounts including “creators, journalists, experts, and nonprofits” for the time being.

Twitter starts to roll out paid Ticketed Spaces on iOS

Last week Twitter rolled out Ticketed Spaces for users who applied for the paid audio room feature back in June. Twitter’s cut from Ticketed Spaces mirrors the same fee structure it uses for Super Follows and users will be able to charge anywhere from one dollar to $999 for advanced ticketing.

The product is the latest in a flurry of activity from the social platform after a lengthy period of product stagnation. But Twitter has been busy in the last 12 months, from releasing and killing its ill-fated Fleets to finally showing signs of life on the kind of anti-abuse features many people have been calling for for years.

Giving users the ability to charge for premium content is a pretty major departure for Twitter, which mostly stayed the course until activist shareholders threatened to oust CEO Jack Dorsey. It’s also a major move for the company into the white-hot creator space, as more platforms add tools to empower their users to make a living through content creation — ideally keeping them loyal and generating revenue in the process.

Twitter expands Spaces to anyone with 600+ followers, details plans for tickets, reminders and more

The business of Patreon