Facebook is preparing to adjust its News Feed to de-emphasize political posts and current events, but news reader Flipboard is instead rolling out an update that puts users in control of their own feeds. The company announced this morning the launch of a new controller on the cover of its own main newsfeed, aka the “For You” feed, which now allows users to select new topics to follow and deselect those they no longer want to hear about. The feature, which Flipboard dubs “an antidote to doomscrolling,” allows users to customize their For You feed to deliver a wider selection of stories related to their various interests, instead of focusing their home page on breaking news and politics.

Given today’s current events — a pandemic that’s dragging on, climate change-induced wildfires and major storms, the fall of Afghanistan and other disasters — it’s no wonder why people want to take a break from the daily news. But for Flipboard, that trend could mean reduced use of its news-reading app, as well.

But while Flipboard notes that millions do use its app to keep up with breaking stories and politics, a majority of its user base also spends their time engaging with other topics — like travel, food, photography, fitness and parenting. 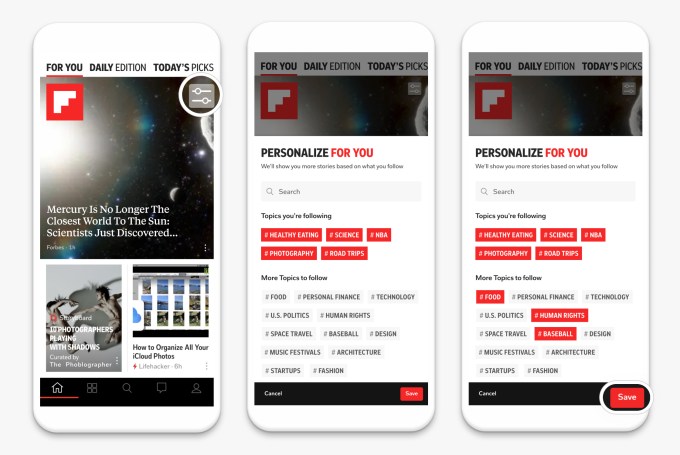 By introducing tools that allow users to customize their own feeds, the company believes users will not only see improved mental health, but will also spend a longer time in the Flipboard app. Already, this appears to be true, based on other recent changes Flipboard has made.

The company recently introduced topic personalization features, which allowed users to zero in on more niche interests — think, not just cooking but keto cooking; not just health, but mindfulness and sleep, for example. Users who customized their preferences spent between nine and 12 minutes per day reading stories about these topics, on average, Flipboard found.

With the launch of For You newsfeed controls, Flipboard wants to bring a similar level of customization and control to users’ own homepages.

The company said the feature also addresses the top request from users — they’ve been asking to have more control over the content selection in their For You feed.

To use the feature, you’ll look for the new filter toggles at the top of the main page. After tapping the icon, you’ll be launched into a window where you can tap and untap a range of topics. You can also use the search bar to discover other interests that may not be listed. When you’re finished customizing, you’ll just tap “Save” to exit back to your newly customized For You feed.

Flipboard hopes its customization capabilities will help it stand out from other news reading experiences — whether that’s browsing news inside social media feeds or even in dedicated news reading apps.

“This level of content control is unique to Flipboard; just think about how hard it is to adjust your feed on any other platform,” noted Flipboard CEO Mike McCue, when introducing the update. “A highly personalized feed empowers people to focus on the things that matter to them, without being distracted by doomscrolling, misinformation or browsing through other people’s lives. We build a platform that lets people take control of their media consumption rather than letting it control them,” he added.