Poppi, a prebiotic soda brand, closed $13.5 million in a Series A2 round and is on a mission to lead in the new category of “functional soda” by offering a better-for-you product that also tastes good.

Husband-and-wife co-founders Stephen and Allison Ellsworth, former oil and gas researchers, launched the soda in 2020 after Allison Ellsworth began having stomach issues about two years prior. She went to doctor after doctor without a definitive diagnosis and decided to take to the internet to find some answers. She not only found that 80% of our body’s immunity stems from gut health, but that she could assist by healing her body through food.

One of the foods that helped with the stomach issues was apple cider vinegar, but drinking it straight everyday became difficult for her. So she went into the kitchen and began concocting a drink that would help her tolerate the vinegar and be tasty enough to drink regularly.

What resulted was a drink that eventually became a hit at a Dallas farmers market, which is where the pair was approached to sell Poppi in Whole Foods Market. They then decided to quit their jobs and do Poppi full time, even gaining a deal from CAVU Ventures co-founder Rohan Oza on Shark Tank in December 2018.

Each can of Poppi includes approximately a tablespoon of apple cider vinegar, sparkling water, real fruit and plant-based sweeteners mixed into a formula that provides a balance of gut-friendly prebiotics known to aid in digestion, immunity and glowing skin.

The drinks retail for $2.49 per can and come in nine flavors like watermelon, strawberry lemon, raspberry rose and orange. They are available in over 7,500 retail locations, including Target, Safeway, Kroger, Publix, Whole Foods and Amazon.com. 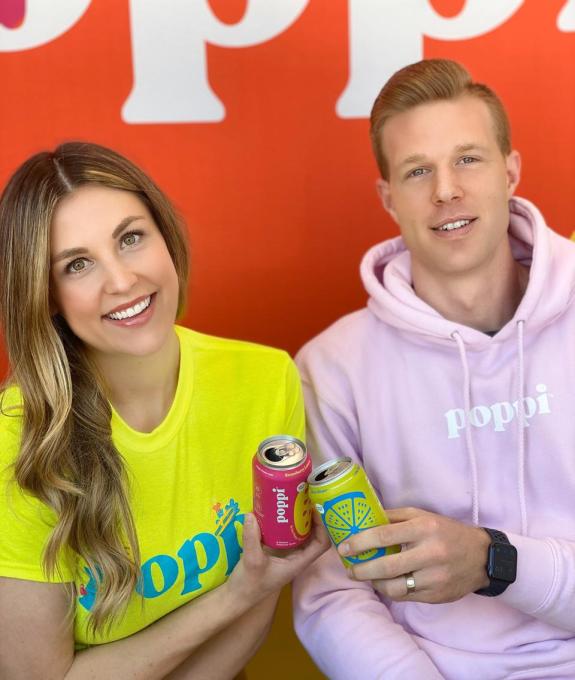 Now the Ellsworths say they are receiving comments from consumers who say Poppi has “changed their lives.”

“At the end of the day, we are putting out a product that is healthy and tastes good,” Allison Ellsworth said. “We don’t want to be a niche health product — that is secondary to what we are trying to do, but it’s a bonus that we get that, too.”

Another bonus is that within the functional soda category, which has grown 465% year over year based on data from research company SPINS, the Ellsworths boast their annual growth put Poppi in the No. 1 spot based on four-week data from SPINS ending June 13, 2021.

Prior to the round, the company was bootstrapped. Proceeds will be used to expand distribution, scale Poppi’s team of 50 currently and marketing. The company is based in Dallas for now, but Allison Ellsworth said the company is moving its headquarters to Austin.

The company grew its revenue 550% year over year and the funding assists in giving Poppi a burn rate of 12 months and the ability to continue in high-growth mode, Stephen Ellsworth said.

Stevie Clements, chief brand architect at CAVU Ventures and a member of Poppi’s board, said via email that the company’s product, founders and growth to date were the drivers for her firm to invest in the company.

In addition, people are looking for products like Poppi that do more for them, while gut health, in particular, is a highly relevant category. The company’s ability to “deliver real function with incredible flavor is unlike anything on the market,” she said.

“Soda is a massive category ripe for disruption, and Stephen and Allison are a great team with an authentic story that’s really proven to resonate with people,” Clements added. “We’re excited by what Poppi has accomplished thus far and feel strongly that a better-for-you soda that tastes amazing and offers real function can shake up the multibillion dollar soda category.”