When did indoor air become cold and clean?

Air conditioning is one of those inventions that have become so ubiquitous that many in the developed world don’t even realize that less than a century ago, it didn’t exist. Indeed, it wasn’t so long ago that the air inside our buildings and the air outside of them were one and the same, with occupants powerless against their environment.

Eric Dean Wilson, in his just published book, “After Cooling: On Freon, Global Warming, and the Terrible Cost of Comfort,” dives deep into the history of this field. It took more than just inventing the air conditioner to make people want to buy it. In fact, whole social classes outright rejected the technology for years. It took hustle, marketing skill and mass societal change to place air conditioning at the center of our built environment.

Wilson covers that history, but he has a more ambitious agenda: to get us to see how our everyday comforts affect other people. Our choice of frigid cooling emits flagrant quantities of greenhouse gas emissions, placing untold stress on our planet and civilization. Our pursuit of comfort ironically begets us more insecurity and ultimately, less comfort.

It’s a provocative book, and TechCrunch hosted Wilson for a discussion earlier this week on a Twitter Space. If you missed it, here are some selected highlights of our conversation.

This interview has been condensed and edited.

Danny Crichton: The framing story throughout the book is about your travels with your friend Sam, who works to collect Freon and destroy it. Why did you choose that narrative arc?

Eric Dean Wilson: Sam at the time was working for this green energy company, and they were trying to find a way to take on green projects that would turn a profit. They had found that they could do this by finding used Freon, specifically what’s called CFC-12. It’s not made anymore, thank goodness, but it was responsible in part for partially destroying the ozone layer, and production of it was banned by the 90s.

But use of it, and buying and selling it on the secondary market, is totally legal. This is sort of a loophole in the legality of this refrigerant, because the United States government and the people who signed the Montreal Protocol thought that when they stopped production of it that it would pretty much get rid of Freon by the year 2000. Well, that didn’t happen, which is kind of a mystery. 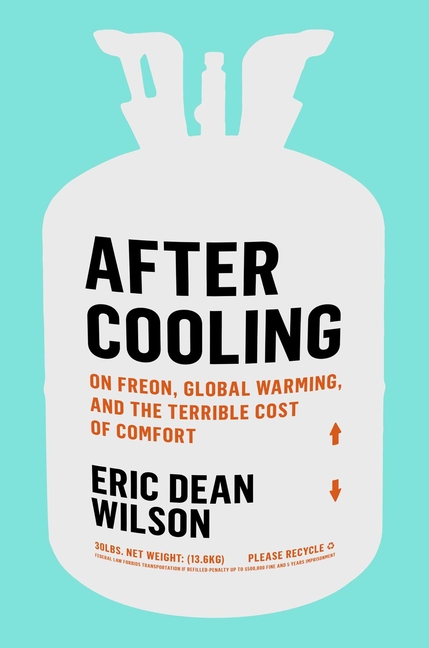 So Sam was driving around the United States, finding Freon on the internet, and meeting people (often people who are auto hobbyists or mechanics or something like that) who happened to have stockpiled Freon, and he was buying it from them in order to destroy it for carbon credits on California’s cap-and-trade system. And the interesting thing about this is that he was going to basically the 48 contiguous states, and meeting people that were often global warming deniers who were often hostile to the idea of the refrigerant being destroyed at all, so he often didn’t tell them upfront that he was destroying it.

What was really interesting to me is that, aside from a cast of colorful and strange characters, and sometimes violent characters actually as well, was the fact that sometimes after establishing a business relationship first, he was able to have really frank conversations about global warming with people who were otherwise not very open to it.

In a time in which we’re told that Americans are more divided than ever politically, that we’re not speaking to each other across ideological divides, I thought this was a curious story.

Crichton: When it comes to greenhouse gases, Freon is among the worst, right?

Wilson: I should be really clear that the main global warming gases are carbon dioxide and methane and some other ones as well. But molecule for molecule, CFCs (chlorofluorocarbons) are thousands of times greater at absorbing and retaining heat, meaning that they’re just thousands of times worse for global warming, molecule for molecule. So even though there’s not that many of them in terms of parts per million in the atmosphere, there’s enough to really make a sizable contribution to global warming.

The irony is that the replacements of CFCs — HFCs (hydrofluorocarbons) — for the most part, don’t really do anything to destroy the ozone layer, which is great. But they’re also super global warming gases. So the ozone crisis was solved by replacing CFCs with refrigerant that exacerbated the global warming crisis.

Crichton: Now to get to the heart of the book, you focus on the rise of air conditioning, but you start by giving readers a wide view of what life was like before its invention. Why did you do that?

Wilson: This was a surprise — I did not go into the book thinking that I was going to find this. Before air conditioning really took off in the home, there was a really different sense of what we would call personal comfort, and something that I really argue in the book is that what we’ve come to think of as personal comfort, and specifically, thermal comfort, has changed. What I argue in the book is that it’s really in part a cultural construction.

Now, I want to be really careful that people don’t hear that I’m saying that it’s entirely a construction. Yes, when we get too hot or too cold, then we can die, for sure. But what’s really interesting to me is that there’s a lot of evidence to show that before air conditioning began at the beginning of the 20th century, people weren’t really hungry for air conditioning.

There was this greater sense that you could deal with the heat. I put that really carefully, because I don’t want to say that they suffered through it. Certainly there were heat waves and summers that got too hot. But there was a real sense that you could manage the heat through analog ways, like sleeping outside, sleeping in parks or designing buildings that incorporate passive cooling. The thing that really disturbed me was that through the 20th century, we really kind of forgot all that, because we didn’t need that knowledge anymore because we had air conditioning. So modernist architecture began to kind of ignore the outside conditions, because you could construct whatever conditions you wanted inside.

I think the question that nobody really asked all along is, is this good for everyone? Should we have a homogenized standard of comfort? Nobody really asked that question. And there’s a lot of people that find that the kind of American model of an office or American model of comfort is not comfortable, both in the United States, and in other places.

Crichton: Even beyond a homogenized standard though, you want readers to understand how comfort connects all of us together.

Wilson: I think that one of the pernicious things about the American definition of comfort is that it has been defined as personal comfort. And the reason why I keep using that is because it’s defined as individual comfort. And so what would it mean to think about comfort as being always connected to somebody else, as more ethical that way? Because it’s true.

The truth is that our comfort is related to other people, and vice versa. It’s really asking us to think interdependently, instead of independently, which is how we’re often encouraged to think, and that’s a huge, huge ask. Actually, that’s a huge task and a huge paradigm shift. But I really think if we’re really trying to think ecologically, and not just sustainably, we have to think about how we’re all connected and how these infrastructures, how they influence other people in other parts of the world.

Crichton: Air conditioning didn’t take off right away. In fact, its inventors and customers really had to push hard to get people to want to use it.

Wilson: Air conditioning really got its start in the early 20th century, in order to control the conditions in factories. I was surprised to find out that air conditioning was used in places to make things hotter, or more humid and slightly hotter in a place like a textile factory, where if it’s not humid enough, cotton threads can break.

Outside the factory, movie theaters were really the first time that thermal comfort was used as a commodity. There were all kinds of other commodifications of comfort, but this was really the first time that the public could go someplace to feel cooler. And the funny thing is is that most movie theaters in the 20s and 30s were freezing cold, they were not what I would call comfortable, because the people who were running them didn’t really understand that air conditioning works best when it’s noticed least, which is a hard sell. In the 20s, though, it was a novelty, and the way that you caught people’s attention on a summer day was to crank the AC up, which felt good for like five minutes, and then it was terribly uncomfortable and you had to shiver through an hour and a half of the rest of the movie.

Crichton: I’m jumping ahead, but what does the future look like as global warming persists and our cooling increases in line with that heat?

Wilson: In so many cooling situations, there are major alternatives, like redesigning our buildings so that they require way less energy and way less cooling. There are really amazing architects who are looking to things like termite mounds, because the colonies that they build sort of have brilliantly engineered rooms with different temperatures.

After Cooling: On Freon, Global Warming, and the Terrible Cost of Comfort by Eric Dean Wilson.

On the future of walls, or The Wall