Bill Gates has solved many problems in his (professional) life, and in recent decades, he’s been dedicated to the plight of the world’s poor and particularly their health. Through his foundation work and charitable giving, he’s roamed the world solving problems from malaria and neglected tropical diseases to maternal health, always with an eye toward the novel and typically cheap solution.

It’s that engineering brain and mode of thinking that he brings to bear on climate change in his book “How to Avoid a Climate Disaster: The Solutions We Have and the Breakthroughs We Need” (yes, it’s italicized on the cover — we really do need them). Gates describes a bit of his evolution from software mogul to global health wizard to concerned climate citizen. If you look at challenges like neglected tropical diseases, for instance, climate change abundantly affects the prevalence of mosquitos and other vectors for infection. No one can avoid climate change when analyzing food security in developing nations. 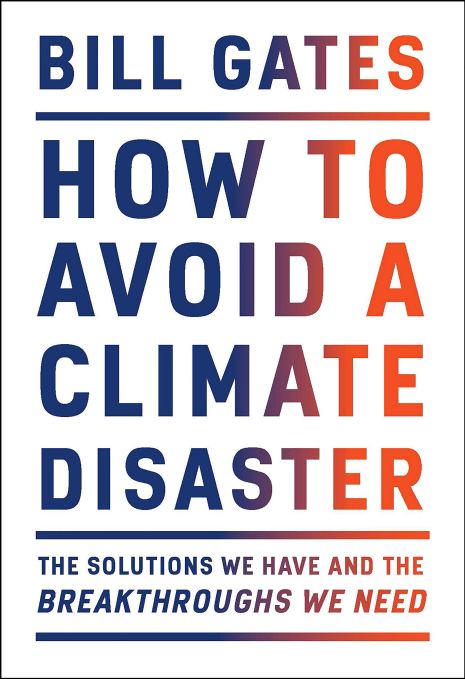 With this early narrative, Gates is attempting to connect perhaps not with climate change skeptics (it’s hard to connect with them on a good day anyway), but instead to build a bridge to the skeptical-but-ready-to-rethink crowd. He admits that he didn’t think much of the problem until he saw its effects firsthand, opening the door to at least some readers who may be ready to undertake a similar intellectual journey.

From there, Gates delivers an extremely sober (one could easily substitute dry) analysis of the major components of greenhouse gas emissions and how we get to net zero by removing 51 billion tons of CO2-equivalent emissions per year, which in chapter order are energy production (27%), manufacturing (31%), agriculture (19%), transportation (16%) and air conditioning (7%).

Gates is an engineer, and it shows and it is marvelous. He places a great emphasis throughout the book on understanding scale, of constantly trying to disentangle the numbers and units we hear about in the press and actually trying to understand whether a particular innovation might make any difference whatsoever. Gates offers the example of an aviation program that will save “17 million tons” of CO2, but points out that the figure is really just 0.03% of global emissions and isn’t necessarily likely to scale up more than it already has. With this framing, he’s borrowing the approach of effective altruism, or the idea that charitable dollars should flow to the projects that can provide the biggest verifiable improvement to quality of life for the least cost.

Unsurprisingly, Gates is a capitalist, and his framework for judging each potential solution is to calculate a “green premium” for their use. For instance, a carbon-free cement manufacturing process might cost double the more normal carbon-emitting one. Compare those added costs with the actual savings these substitutions would have on greenhouse gas emissions, and voila: You have an instant guide on the most efficient means to solving climate change.

The answer he comes up with tends to be quite portable in the end. Electrify everything, decarbonize electricity, carbon capture what’s left and be more efficient. If that sounds hard, that’s because it is, and Gates notes the challenges in an aptly-named chapter entitled “This Will Be Hard,” which begins with the line “Please don’t let the title of this chapter depress you.” I’m not sure you needed to buy the book to figure that out.

Gates ends up being an end-to-end conservative figure throughout the book. It’s not just his general approach of protecting the status quo, which is obviously latent in solutions that are essentially substitutable tweaks to our way of life and shouldn’t be surprising given the messenger. It’s also the surprising conservatism of his views on the power of technology to solve these problems. For a person who has quite literally invested billions in clean energy and other green technologies, there is surprisingly little magic that Gates proposes. It’s probably realistic, but considering the source, it can feel like pessimism.

Read in concert with some of the other books in this group of climate change reviews, and one can’t help but feel a sort of calculated naiveté on the part of Gates, a sense that we should just keep playing our cards a little while longer and see if we get a last-minute royal flush. There are early signs of solutions, but most aren’t ready for scale. Some technologies are already available, but would require prodigious outlays to retrofit cars, homes, businesses and more to actually impact our emissions numbers. Then there’s everyone outside of the West, who deserve access to modern amenities. It’s all so easy, and yet, so out of reach.

The book’s strengths — and simultaneously its weaknesses — is that it is apolitical, fact-laden and ready to be read by all but the most ardent climate change skeptics. But it also acts as a gateway drug of sorts: Once you understand the scales of the problem, the scopes of the solutions and the challenges of green premiums and policy implementation, you’re left with the feeling that there is no way we are going to do this in the next few years anyway, so what’s really the point?

Gates ends the book by saying that “We should spend the next decade focusing on the technologies, policies, and market structures that will put us on the path to eliminating greenhouse gases by 2050.” He’s not wrong, but it’s also an evergreen comment in a world that won’t be evergreen for much longer.

How to Avoid a Climate Disaster: The Solutions We Have and the Breakthroughs We Need by Bill Gates
Alfred A. Knopf, 2021, 257 pages

Is the best way to solve climate change to “do nothing?”