Michael Chernow is already known as a restaurateur, chef, television host and entrepreneur, but now he can also add lifestyle and wellness guru to that list.

Chernow raised $2.2 million to launch Kreatures of Habit, a lifestyle and wellness brand, with the goal of helping people establish healthy habits.

The idea for Kreatures of Habit stemmed from Chernow’s own life, celebrating 17 years of sobriety. He said he adopted positive habits that enabled him to replace alcohol with nutrition and fitness.

It is the latest venture for Chermow, who also founded The Meatball Shop and Seamore’s in New York. The brand originally started out as a café concept, but Chermow pivoted to the consumer goods space when the global pandemic hit.

“I had put a plan together in 2019, was away for a few weeks when the news of COVID hit,” he told TechCrunch. “I called up my investors and said ‘I am not going to invest in this and neither should you. I’m going to reassess and get back to you.’ However, through my journey of scaling restaurants, I didn’t love doing it because I went from being a culture entrepreneur to a project manager. It was a far cry from connecting to human beings around a brand.”

He started with breakfast — his favorite meal of the day — and began looking at his sustenance of choice: oatmeal, protein and vitamins. Now he is targeting the $3.3 billion pre-packed oats market with his first product, a direct-to-consumer instant oatmeal called The PrOATagonist. 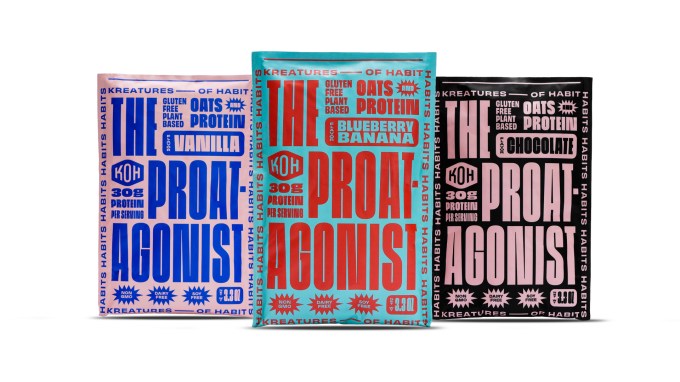 It is a plant-based, gluten and allergen-free meal that has his three favorite breakfast go-tos — oats, protein and vitamins, plus minerals and Omega-3 fatty acids. Chernow spent over a year testing the formula, which comes in three flavors, including chocolate, blueberry-banana and vanilla.

To help Chernow tap into the industry, he brought on former RX Bar chief marketing officer Victor Lee to lead the brand’s go-to-market strategy. The PrOATagonist comes in a box of seven for $34, and can be obtained via a monthly subscription of $33.

He is also working with one of his investors, Elevator Studios’ Fleyshman, who Chernow referred to as “the best marketer today.”

Fleyshman said he was eager to invest after getting off of a Zoom call with Vaynerchuk.

“The combination of Michael’s resume and passion to build a business with Gary’s passion for building a brand had its advantages as did the cool factor of making a brand with a physical product,” he added. “Gary got 30 people together on the call and almost half had committed within the week.”

In addition to funneling much of the new funding into marketing, it will also be used on product development.

“We have a pipeline of products that will live in the beginning of the day and snack space, several that are in development right now,” Chernow added. “We will always have a capsule collection drop three times a year, a seasonal line and full suite of SKUs over the next three to five years.”