Apple today is launching a new program that will allow subscription news organizations that participate in the Apple News app and meet certain requirements to lower their commission rate to 15% on qualifying in-app purchases taking place inside their apps on the App Store. Typically, Apple’s model for subscription-based apps involves a standard 30% commission during their first year on the App Store, which then drops to 15% in year two. But the new Apple News Partner Program, announced today, will now make 15% the commission rate for participants starting on day one.

There are a few caveats to this condition, and they benefit Apple. To qualify, the news publisher must maintain a presence on Apple News and they have to provide their content in the Apple News Format (ANF). The latter is the JavaScript Object Notation (JSON) format that’s used to create articles for Apple News which are optimized for Mac, iPhone and other Apple mobile devices. Typically, this involves a bit of setup to translate news articles from a publisher’s website or from their CMS (content management system) to the supported JSON format. For WordPress and other popular CMS’s, there are also plugins available to make this process easier.

Meanwhile, for publishers headquartered outside one of the four existing Apple News markets — the U.S., U.K., Australia or Canada — they can instead satisfy the program’s obligations by providing Apple with an RSS feed.

On the App Store, the partner app qualifying for the 15% commission must be used to deliver “original, professionally authored” news content, and they must offer their auto-renewable subscriptions using Apple’s in-app purchase system. 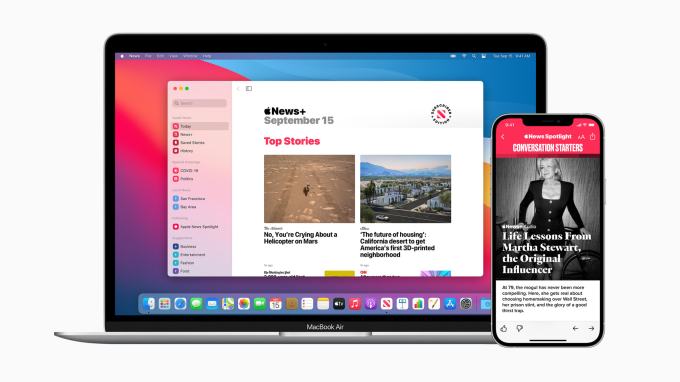 While there is some initial work involved in establishing the publisher’s connection to Apple News, it’s worth noting that most major publishers already participate on Apple’s platform. That means they won’t have to do any additional work beyond what they’re already doing in order to transition over to the reduced commission for their apps. However, the program also serves as a way to push news organizations to continue to participate in the Apple News ecosystem, as it will make more financial sense to do so across their broader business.

That will likely be an area of contention for publishers, who would probably prefer that the reduced App Store commission didn’t come with strings attached.

Some publishers already worry that they’re giving up too much control over their business by tying themselves to the Apple News ecosystem. Last year, for example, The New York Times announced it would exit its partnership with Apple News, saying that Apple didn’t allow it to have as direct a relationship with readers as it wanted, and it would rather drive readers to its own app and website.

Apple, however, would argue that it doesn’t stand in the way of publishers’ businesses — it lets them paywall their content and keep 100% of the ad revenue from the ads they sell. (If they can’t sell it all or would prefer Apple to do so on their behalf, they then split the commission with Apple, keeping 70% of revenues instead.) In addition, for the company’s Apple News+ subscription service — where the subscription revenue split is much higher — it could be argued that it’s “found money.” That is, Apple markets the service to customers the publisher hadn’t been able to attract on its own anyway.

The launch of the new Apple News Partner program comes amid regulatory scrutiny over how Apple manages its App Store business and more recently, proposed legislation aiming to address alleged anticompetitive issues both in the U.S. and in major App Store markets, like South Korea.

Sensing this shift in the market, Apple had already been working to provide itself cover from antitrust complaints and lawsuits — like the one underway now with Epic Games — by adjusting its App Store commissions. Last year, it launched the App Store Small Business Program, which also lowered commissions on in-app purchases from 30% to 15% — but only for developers earning up to $1 million in revenues.

This program may have helped smaller publishers, but it was clear some major publishers still weren’t satisfied. After the reduced commissions for small businesses were announced in November, the publisher trade organization Digital Content Next (DCN) — a representative for the AP, The New York Times, NPR, ESPN, Vox, The Washington Post, Meredith, Bloomberg, NBCU, The Financial Times and others — joined the advocacy group and lobbying organization the Coalition for App Fairness (CAF) the very next month.

These publishers, which had previously written to Apple CEO Tim Cook to demand lower commissions — had other complaints about the revenue share beyond just the size of the split. They also didn’t want to be required to use Apple’s services for in-app purchases for their subscriptions, saying this “Apple tax” forces them to raise their prices for consumers.

It remains to be seen how these publishers will now react to the launch of the Apple News Partner program.

While it gives them a way to lower their App Store fees, it doesn’t address their broader complaints against Apple’s platform and its rules. If anything, it ties the lower fees to a program that locks them in further to the Apple ecosystem.

Apple, in a gesture of goodwill, also said today it would recommit support to three leading media nonprofits: Common Sense Media, the News Literacy Project, and Osservatorio Permanente Giovani-Editori. These nonprofits offer nonpartisan, independent media literacy programs, which Apple views as key to its larger mission to empower people to become smart and active news readers. Apple also said it would later announce further media literacy projects from other organizations. The company would not disclose the size of its commitment from a financial standpoint however, nor discuss how much it has sent such organizations in the past.

“Providing Apple News customers with access to trusted information from our publishing partners has been our priority from day one,” said Eddy Cue, Apple’s senior vice president of Services, in a statement. “For more than a decade, Apple has offered our customers many ways to access and enjoy news content across our products and services. We have hundreds of news apps from dozens of countries around the world available in the App Store, and created Apple News Format to offer publishers a tool to showcase their content and provide a great experience for millions of Apple News users,” he added.

More details about the program and the application form will be available at the News Partner Program website.