Canalys released its quarterly U.S. PC sales today, and while the news was quite good with sales overall up 17% YoY, the growth slowed significantly from the prior quarter when sales soared to 74% pushed by the pandemic. Perhaps that is also due the widely reported worldwide chip shortage.

HP retained top spot for the second straight quarter with 21.9% of the market, up over 20% from the previous year. Apple remained in the second spot with a 20.6% share. It’s worth noting, however, that Apple’s growth fell -2.8% for the year.

Dell was in third place with 15.6%, followed by Lenovo with 12.4%. If you’re looking at yearly growth rate, Samsung had the highest with over 50%, but that translated into just over 6% market share. 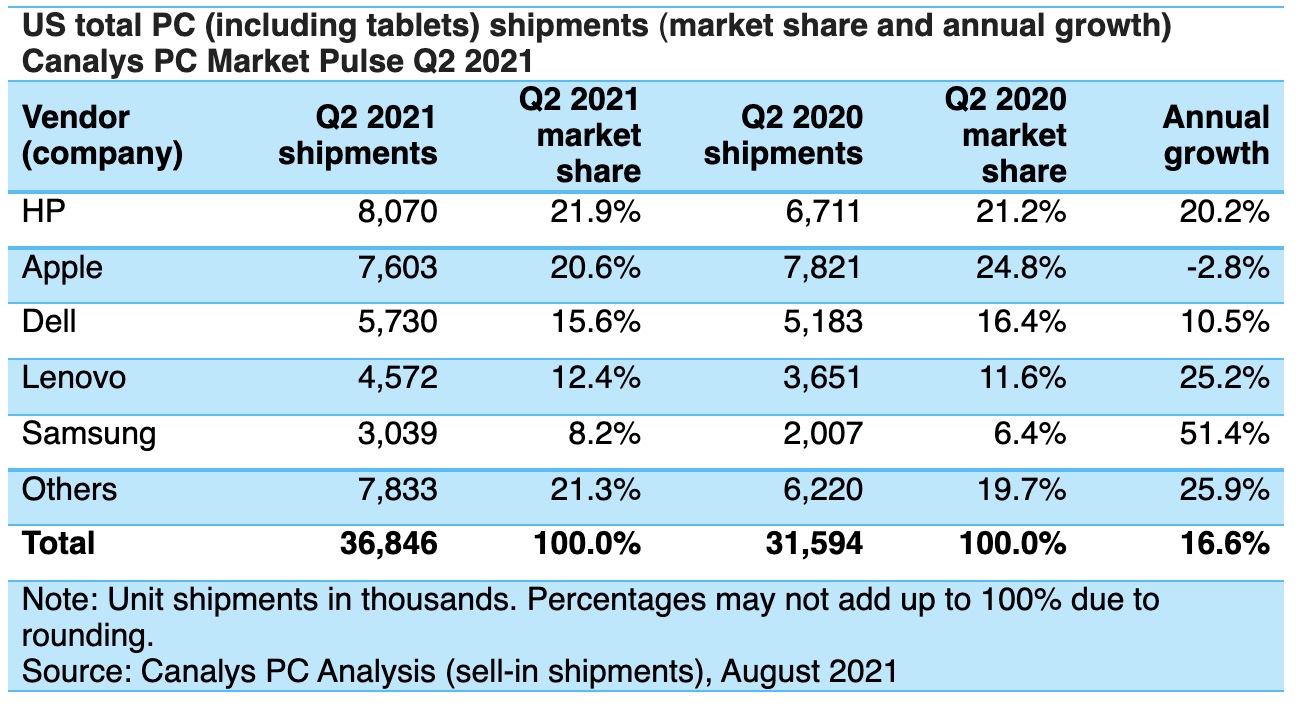 Brian Lynch, research analyst at Canalys, is optimistic that the pandemic-fueled growth we have been seeing in this market throughout 2020 and 2021 will continue and that consumer refreshes could be on the horizon as the economy continues to rebound.

“The commercial and education segments have exploded, triggering tremendous refresh potential. The U.S. economy has bounced back well from its pandemic woes and small businesses are recovering, which will lead to a wave of purchasing from the segment,” Lynch said in a statement.

Overall there were 36.8 million units sold and that includes notebooks, which were up 27%; desktops, which were up 23%; and tablets, which were basically stagnant with growth actually down 1%. Canalys attributed this drop to the education market moving away from tablets and the fact that many people bought tablets when they were stuck at home, but won’t be refreshing quickly.

In spite of this, Apple remains firmly in charge in the tablet market with a 45% share, while Amazon is well back in second place with 22% followed by Samsung with 18%.

It seems clear that even though more people may be returning to in-person learning and in-office work at some point, many schools and businesses will continue to take a hybrid or even fully remote approach and that should bode well for the PC industry, especially whenever the chip shortage finally abates.